Birthday Pow Wow at The Wigwam!

If you've read this blog for any length of time, you're sure to have realized that wacky tacky is defined in large measure by the reckless ingenuity of 20th-Century America.  From roadside architecture to flagpole sitting to marshmallow creme, industrialized America used its unique blend of innovative spirit, disposable time/income and constitutional freedom to create a trail of googie glory of from sea to shining sea.  The Wigwam Motel (est. 1949) in San Bernardino, CA is my "amber waves of grain" and it's enough to have me weeping through a spirited rendition of "America the Beautiful," or at least "This Land is Your Land."  You might remember that we have featured the Wigwam Motel in a previous blog post but when our friend Benny told us that he was planning his birthday party there, we decided that any time is a fine time to go sleep-y in a tee pee.  We briefly questioned our decision as on our drive out to the party the freeway traffic headed inland was disturbingly light.  Glancing across to the other side of the road, miles and miles of cars were backed up in their desperate race to the coast and cooler climes.

The festivities began with a no-holds-barred game of netless, vigilante volleyball.  It was a veritable version of the old west where rules were made on the spot but were really made to be broken.  I'm still not sure who won because every player proclaimed him/herself a victor.


A smorgasbord of party foods, grilled favorites and German-style veggies was laid out and "cleaned up" just as quickly.  Swimmers kept right on swimming and music wafted over the grounds of The Wigwam.  Fortunately, the motel's slightly-industrial surroundings allowed for all-night revelry and and our party didn't seem to disturb the neighbors.


With so many well-dressed attendees, one found wonderful clothing at every turn.  I got just a couple shots of some fashion accessory do's. 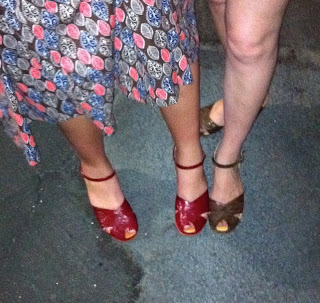 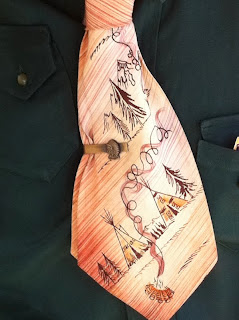 Dancing lasted late into the night/early in the morning.  For the first (and probably only) time in my life I didn't go to sleep until 5 o'clock in the morning.  It has probably become glaringly-apparent to readers and anyone who has met me but to state the obvious, I am SQUARE.  I am like an eighty eight-year-old man;  I like to have dinner around 4:30 and most nights I am contentedly snoring by 9 o'clock.  But a party is a pow wow and I didn't want to be the first brave back in his wigwam! 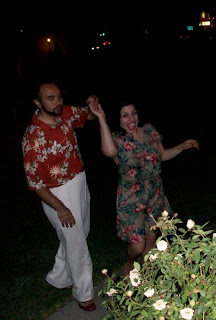 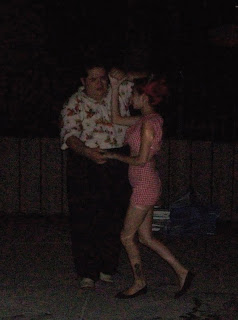 
Why is it that on work days I have to drag myself out of bed but on mornings when I have every right and reason to sleep in, I wake up bright and early?  Even after dancing all night, I awoke with the sun.  I blame a pitiless, internal alarm clock and the neighborhood roosters - seriously.


When we left, the thermometer reading was 115.  As we made our way home, there was a nearly-40 degree drop in temperature; we're thankful for wigwams with air conditioning but even more grateful for ocean breezes.  Thanks Benny for getting the gang together for a heap-good party!

p.s. There is a little contraversy as to the exact location of the Wigwam Motel.  The motel's website lists a San Bernardino address but many books and websites site Rialto as the home of the motel.  Rest assured, if you ever find yourself on Foothill Blvd in Rialto/San Bernardino, you will not get lost; the Wigwam Motel will be the ONLY motel made of giant teepees.
Posted by Mr. Tiny at 11:43 PM 4 comments


Boyle Heights?! Why would anyone want to go to Boyle Heights?  By some accounts, Boyle Heights is a boil on the landscape of LA and should just be lanced once and for all!  I find that before undergoing any painful medical procedure, it is imperative to inspect "the Boyle" just a little bit closer to find the hidden gems in one of Los Angeles' great, old neighborhoods and determine its favorable qualities.  I'll make a list..."Great Things About Boyle Heights":  its proximity to Downtown LA, the freedom to paint one's house tangerine and pink without fear of outshining the neighbor's turquoise/fuschia color scheme, the ease of procuring cheesy-mayonnaise corn on the cob, and the home of wacky tacky wunderkinds Ben & Erika!


Never were there two bright, shining examples of wacky tacky as are found in Ben & Erika.  From the front porch right on through to the kitchen, one is enveloped in their wacky tacky dreamscape!

Walking into their house, one comes to the conclusion that the architect of their mid-1920's, craftsman-style bungalow is doing one of three things - rejoicing, turning over in his grave, or (more likely),  stuffed and staring at you from the far corner of the living room. 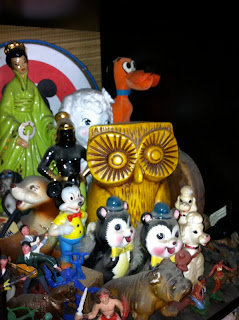 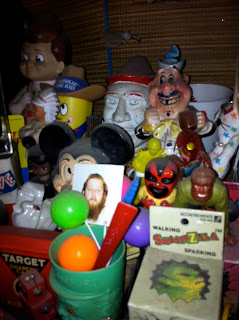 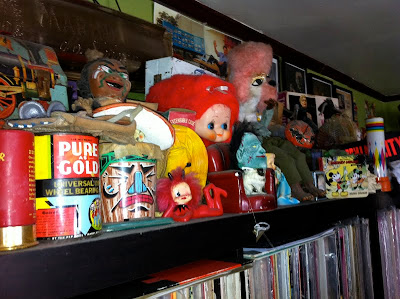 wacky tacky has no list of design rules or any overwrought, organized system of beliefs. There is no doubt however, that wacky tacky resides here.  Ben & Erika embrace the spirit of wacky tacky through their often-unusual combination of collections and themes - and sometimes not so unusual...


Ben & Erika do not just respect different people, places, and cultures - they collect!  Their collections of mid-Century novelties, ephemera, toys, art and music could fill a space much larger than their humble home. 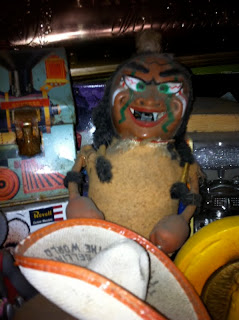 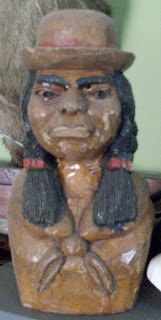 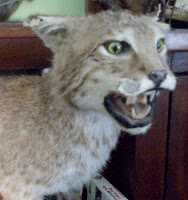 Of course, taxidermy is almost always a part of the wacky tacky equation. 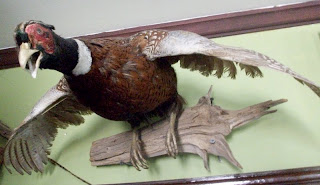 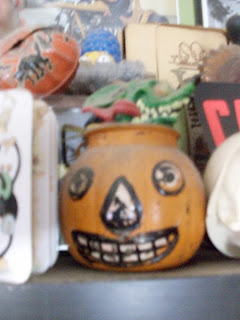 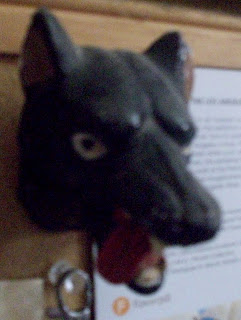 Their bedroom is a happy combination of nautical & aquatic, where seashells, velvet paintings, chalkware fish and ships rule the waves.  However, they did not follow through with the theme completely - no waterbed. 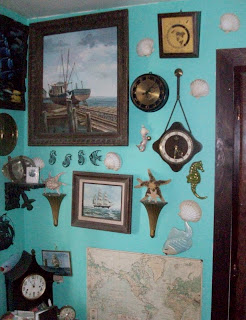 The thing that I really love about this wacky tacky home is that it is an amalgam of family heirlooms, thrift store/flea market finds, and the marriage of their collections, tastes and sensibilities when they themselves got married.

I don't think there is a flat surface in this house that isn't occupied by some collection of tschotskes.


On a recent visit to their home, we actually made friends with the neighbor kids and hung out on the front porch.  We had an impromptu jam session; several guitars came out, maracas and a tambourine were involved, and two Fisher-Price Pull-A-Tune Xylophones rocked the house.

As we played, the ice cream man came by and a kindly, old gentleman tipped his hat, welcomed us to the neighborhood and stopped to chat for a while.


The man asked where we were from and Erika politely responded that she was raised in the area and that they have lived in the house for years.  Understandably, the man viewed our young group of people from varying ethnic backgrounds as a bit of an uncommon sight in this particular area.  The man expressed that he was genuinely pleased that neighborhood was turning around and residents were taking a little more pride of place.  Which brings me to the topic of gentrification.  The word gentrification carries with it a terrible connotation.  People assume that it involves cultural enclaves  being destroyed and entire socio-economic groups being forced to flee their family homes.  However, I find that the term is used most by "gentrifiers" who employ the term only to make themselves appear more hip, culturally-aware, and to dissociate themselves from the other "gentry."

I must say that as far as gentrification goes, I'm all for it!  I love to see beautiful, historic neighborhoods resurrected.  What can be horrible about creating a more diverse community, raising property values, and investing in areas that are crying out for some much-needed attention?  Of course, I am not for the displacement of families and local businesses, but I wholeheartedly love to see neighborhoods reborn.  Also, at least in Southern California, it seems like "ungentrified" neighborhoods are the only ones in which first-time home buyers can afford to invest.


As you ponder the pros and cons of gentrification and question the ability of Ben & Erika to clean all of those knick-knacks, I thought I'd leave you with a few extra photos of more cool things around their pad. 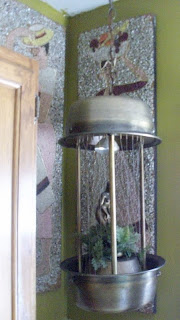 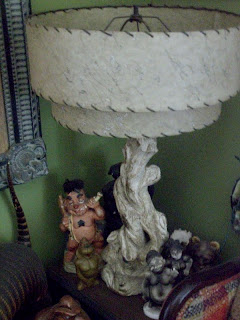 By now you should know that I love light fixtures! 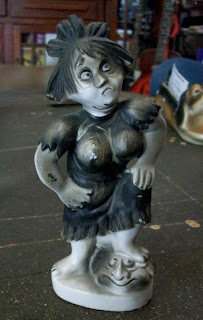 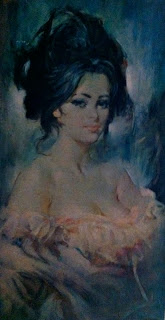