When I was young I wanted to be rich and famous.  Rich because, well, who doesn't want a few extra scheckels to rub together?  Famous because I wanted my portrait done by Al Hirschfeld.  I really thought, and continue to think, that being immortalized by "The Line King" is the height of celebrity.  With a few deft strokes of his pen or brush, Hirschfeld was able to fully capture not only the stars' looks, but their personalities, their mannerisms, their foibles, and their charms.


Born in St. Louis, Hirschfeld did all of the things that a budding artist in the 1920's should do including the obligatory stint in Paris.   Back in the U.S., he found work as a cartoonist for The New York Times and quickly made a name for himself as America's premier caricaturist.  Because his career spanned eight decades and included political figures, society luminaries, and stars of music, stage, and screen, his work came to define the medium in the 20th Century. His style was so unique and spare that a Hirschfeld caricature is identifiable at first sight.  The quality and impact of his artistry are astounding; with a minimum of line and shape he created master works.  His influence was so profound that many modern cartoonists, illustrators, caricaturists, and animators cite his work as inspiration for their own work.  In fact, the "Rhapsody in Blue" animated sequence from Walt Disney's Fantasia 2000 is an homage to the genius of Al Hirschfeld.

As the great Line King has moved on to his great reward, it seems highly improbable that I will have my portrait made any time soon.  In his absence I do feel a modicum of relief, only because if the day had ever come when the master caricaturist and illustrator did find me a worthy subject, the internal conflict would be huge; with the thrill of achievement would come the overwhelming, petrifying terror.  On which of my many "flaws" would Hirschfeld choose to focus - exaggerate even - to create my caricature?  Would it be my big ears?  My crooked teeth?  My chubby cheeks?  My funny nose? My oversized form? All of the above?  Even still, I would risk it.  In reviewing his work, I can't imagine that any of the stars could feel anything but flattered.

At this point in my life, I am satisfied being neither rich nor famous.  In fact, I'm quite content with my magic combination of poverty and anonymity, but what I wouldn't give to have Al Hirschfeld draw my picture.

Earlier this year we made our way up to The Paley Center for Media in Beverly Hills for the auction preview of Debbie Reynolds' vast collection of Hollywood costumes and memorabilia.  The costumes were amazing and Debbie Reynolds' foresight in collecting and preserving these pieces of Hollywood history was truly profound.  Fortunately, we made it (see blog post) - but just barely - on closing day.  When we heard that there would be a second exhibit of even more costumes, we committed to going but being the world-class procrastinators that we are, we again put it off until nearly the eleventh hour (the exhibit ends this week with the auction on Saturday, December 3).  Luckily, I was able to meet up with some friends, including fellow-bloggers Beth from V is for Vintage and Lauren from Wearing History.

The costumes that were on display this time were a little less spectacular than the previous exhibit - Marilyn Monroe's dress from The Seven Year Itch, Maria's dress from The Sound of Music, Dorothy's ruby slippers.  Also, it appears that a little less time was taken in the curation; not every piece in the auction was on display and not every piece was described in detail as was the case in the former exhibit.

Having aired my grievances, it must be said that the entire preview catalog is available online and in spite of my minor gripes, the exhibit was still pretty spectacular.  If Reynolds' collection consisted only of the pieces we saw this time, I would still consider her a wise and wealthy woman.  I didn't get pictures of every item, so perhaps the best way to present these photos is by the stars who wore them, starting with Reynolds herself.

What's the Matter with Helen?
This is too "goody, goody" to miss. 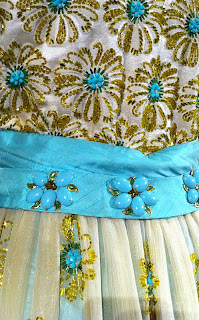 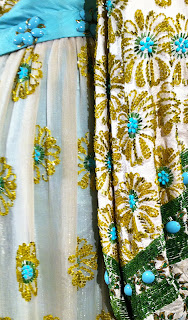 Details of the beautiful beading 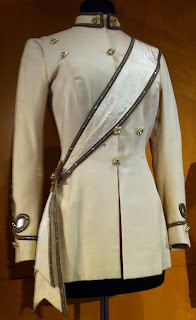 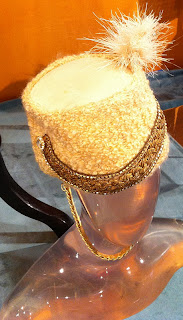 The Glass-Bottom Boat (1966)
This movie is about as corny and awesome as it can get -
Paul Lynde as an undercover, transvestite, NASA security guard.

A FEW STANDOUTS FROM THE COLLECTION

Overall, it was another great showing of Hollywood history - Irene, Adrian, Helen Rose, Edith Head, Jean Louis, Walter Plunkett, and more.  A serious "thank you" is owed to Debbie Reynolds for being clever enough to save all these things from the ravages of time and studio dumpsters!