There is no politically correct way to discuss Tod Browning's 1932 masterpiece, Freaks.  It is the story of greed, corruption, and betrayal with a cast heavily-populated by real 1930's sideshow freaks.

Freaks is really a proto-Noir picture, filmed within the transitional period of the Hays Code that carved a path both thematically and stylistically for future, film noir classics like Nightmare Alley.  Its noir-ish tendencies are found in the theme, style, cinematography, and cast of seriously-flawed characters motivated by their own anger, avarice, and jealousy.  In a movie like this, it is tough to find anyone for which to root - except for the freaks!


The story is about trapeze artist, Cleopatra, "Queen of the Air," who uses her feminine wiles to charm Hans, a little person, out of his inherited fortune.

Before viewers can start feeling too sorry for Hans, it is made known that he is engaged to fellow performer Frieda.  Unfortunately, he just cannot resist the "most beautiful big woman in the world."


Meanwhile, Cleopatra, along with her strongman boyfriend, Hercules, plots a wedding for Hans and Cleo so they can kill him and make off with Hans' fortune.

Hans and Cleopatra do get married and host a wedding feast.  The open-hearted freaks are fully prepared to accept Cleopatra but, revolted by the thought of being "one of them," she reacts rather impolitely.

Justifiably offended, and apprised of her motives, the freaks plan a future for Cleopatra far different from the one she had envisioned with Hercules.  To find out just what they have planned, you must watch Freaks!

It is easy to see the type of circus sideshow depicted in the film, and even the film itself, as exploitive and inhumane.  Considering the era (Depression) and the prevailing attitudes of society, circuses actually provided a haven for people born with disabilities, disorders, and odd appearances.  The sideshow became a means of earning both money and a new "family" in a time when families were discarding or selling off these "accidents of nature."  Fortunately, time and science have been on society's side and we seem to have gotten at least slightly more enlightened and compassionate. An interesting tidbit that I learned in researching this movie is that Elizabeth Green, "The Stork Woman," was actually a "normal" business woman (she owned several apartment buildings); she used her business savvy to capitalize on her odd appearance and joined the circus.

Without giving away too much, Browning betrays a profound love and respect for the "freaks" throughout his film.  His behind-the-scenes portrayal of life in an early-20th Century circus/side show illuminates the simple dignity with which the "freaks" lived in spite of the heretofore untold indignities they were forced to endure.  Somehow, through it all, he imbues their story with great humanity while allowing the audience to find justice through their unique code of solidarity.  It might sound trite, but in the end, we are left seeing the "normal" characters, with their cynicism, their manipulative and mean spirits, and ultimately, their sociopathic tendencies, as the real deviants - the freaks.  While the filmization  of the contemporary novel, Water for Elephants, may show the ugly machinations of a Depression-era circus, no film other than Freaks has offered such a dynamic portrait of backstage-circus life for the real stars of the show, the sideshow performers.

I Met a Teenage Werewolf!

I had a completely different post planned for today.  But good plans are thrown out like the baby with the proverbial bath water when one meets Eddie Munster!!!
That's right, I met the Eddie Munster, the boy werewolf from The Munsters (one of the finest programs ever produced on American television).  It sounds like a terrible joke, "What do you get when you cross Frankenstein with a vampire?"  The answer, of course, is a werewolf!  I would try and explain monster genetics to you but it gets pretty complicated.
Alright, alright, so Eddie was more of a pre-teen werewolf, and if you want to get uber-technical, I actually met Butch Patrick the man behind the pointy ears and extreme widow's peak.  But to me, and probably to the rest of the world, he will always be Eddie Munster.

Butch is a great guy, but to me the most exciting part is that now only one rather-insignificant degree separates me from Yvonne De Carlo!  Now that's my kind of wacky tacky celebrity encounter!  Have you met anyone of wacky tacky repute?  Do you have a favorite Munster's episode?  Please share.
Cheers!
Mr. Tiny
Posted by Mr. Tiny at 9:04 AM 5 comments

PDX, PDQ: Portland in a Hurry!


Part of our recent adventure in the Pacific Northwest included an all too brief stay in Portland, Oregon.  I wonder how many people are actually native to Portland as in the last ten years, Portland has seen more than its fair share of Southern California transplants including many of my friends.  If you're up for a long ride, here is "Rose City" as viewed through wacky tacky-colored glasses. 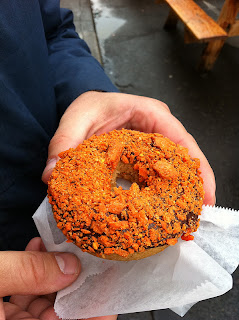 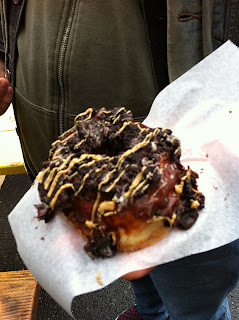 Speaking of amazing signs, my favorite part about Portland was the incredible signage everywhere one looked.  I hate to say it, but I think Portland outdoes even Los Angeles in its commitment to maintaining these incredible markers.  I had convinced myself that I took many more photos of cool signs, but I guess I didn't.  I'm not sure how many more photos could be included in this post anyway...you're only about halfway through! 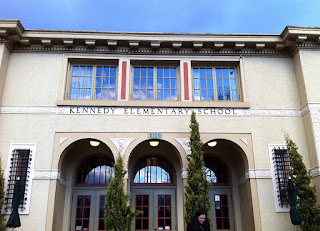 I learned a new word when I was in Portland, "McMenamins."  McMenamins is a brewer that began reclaiming old buildings and turning them into multi-use spaces that include restaurants, bars, art and performance venues, movie theaters, and hotels.  The best part is that they preserve as much of the architectural interest and integrity of the structures as possible.  I think other large cities should be taking note and repurposing buildings doomed to demolition or dereliction. We visited the Kennedy Elementary School location.  Built in 1915, the school turned hotel/bar/restaurant/theater is beautiful and makes my elementary school look pretty low-budget by comparison. 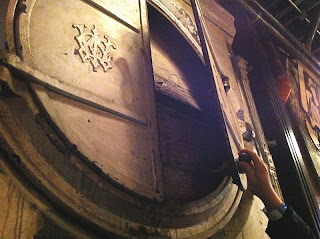 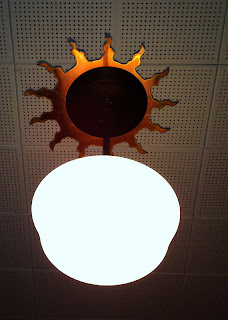 A never-ending fixation with light fixtures 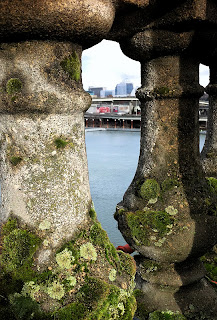 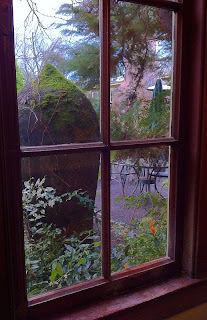 I found real exoticism is things far more tame than the the Golden Dragon and Mary's.
I found it in..(insert drum roll)...MOSS!
I loved that almost every available surface was covered in its fuzzy verdure.


I guess naming this post "pretty darn quick" was rather misleading; looking through these photos might take longer than our whole stay in Portland.  I edited the best I could, but we tried to pack a heck of a lot into less than 48 hours!  I feel like we just skimmed the surface of what Portland has to offer and I can't wait to go back to visit friends both old and new - when it is not so COLD!