There has to be some kind of superstition that warns against revealing one's Halloween costume prior to October 31.  Somehow it feels like a bride parading around town in her wedding dress before the big day, especially to one who views Halloween as a marriage of everything wonderful - holidays, dress-up, ghost stories, and free candy!!!  Having broken many a mirror with only negligible consequences, I am willing to tempt the fates and show off this year's version of my tried-and-true Halloween pajamas (as is the case every year, my passion for Halloween is tempered only by my extreme distaste for even minor discomfort, i.e. ungainly costumes, elaborate makeup, full-face masks, gore, the inability to sit/stand/eat/use the facilities properly, etc.).  Any costume I wear must be able to do double duty as lounge/sleepwear.

Even dressed as a genie, the most important question I can ask myself when I'm trying on new clothes is, "Is this flattering or is this fattering?"  Swathed in at least ten yards of reflective, bargain-bin upholstery material, I think the answer is clear.

Fattering though it may be, the costume fulfills all of my comfort requirements as well as the usual budgetary concerns.  The only things I had to buy specifically for the costume were the slippers and the window-pane taffeta; everything else was unearthed from the bottomless pit of my fabric/craft stash (You may call me Prudence of Arabia).  Dare I say that my costume was nearly my "wish" come true?  Rather than a sophisticated, sometimes-sinister sultan, I think I more closely resemble Jeannie's junior-genie, Babu...

You only have a few days left; what are you going to be for Halloween?!!

You know how you watch every episode of The Great British Bake Off/Baking Show (plus all of its auxiliary programs/interviews) on YouTube before you realize that they offer the latest season on Netflix which somehow translates into a first-class ticket to the world of misplaced confidence, thinking that you can (and should) do anything they can do on the show and do it better?  Well, I do.

Intent on making Halloween last as long as possible, I confidently sauntered up to the Kitsch-en Kounter to do a quick Halloween-themed "bake" - a Pumpkin-Spice-Cream-Cheese-Dark-Chocolate-Brownie Jack O' Lantern.


My staunch refusal to adhere to the exacting standards of modern baked goods combined with the fact that this was an experimental recipe, meant that there was an overwhelming surplus of batter.  Undeterred, I thought WWMBD? (what would Mary Berry do?); immediately, I retrieved a loaf pan from the cupboard.


I might not be ready for the pressures of a "showstopper" challenge, but you can be darn sure that I am ready for the spookiest night of the year!


How are you preparing for the big day?  We hope it is with full-size candy bars!!!  However you choose to celebrate, we wish you a Happy and FRIENDLY Halloween!!!

I had started composing this post about three years ago but somehow it got lost in the shuffle of the draft folder.  I was reminded of its existence when, bored and scrolling through Facebook, I took one of those online quizzes that logarithmically determines from which celebrated historical figure one is reincarnated, which ice cream flavor represents one's birth order, or which Disney princess one would most likely consume in the event of a fairy tale apocalypse - only this one tells you "which witch" you are (based on Hollywood's most famous examples).  I wasn't a bit surprised when the results came back "Endora!"  Equal parts mischievous, mean-spirited, and dramatic, Halloween seemed like the perfect time to cast a flickering light on television's favorite witch.

Most people remember Agnes Moorehead for the exaggerated eye make-up, infernal meddling, and intentional malapropisms (see: "Derwood, Darwin, Dagwood") of Endora.  To me, however, she will always be the cantankerous Mrs. Snow from Pollyanna.  "Pills and bills, just pills and bills!"

Like most character actors of her generation, Moorehead had what we in the business call "range."  Some of our favorite performances include:

Once she even played one of America's greatest first ladies,
Eleanor Roosevelt, for a television fundraiser in 1964.

Blessed with that slightly-affected dialect of New England society dames, Moorehead's languid tones and knack for transformation translated into a six-decade career in theater, radio, film, and television.  Her talent was as undeniable as her sophistication and offbeat beauty. 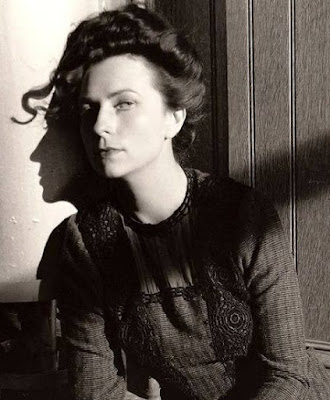 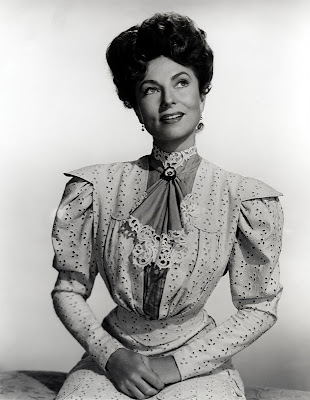 For all of the vanity intrinsic to her most-beloved portrayals, ego rarely played a part in Agnes Moorehead's character choices.  She was always willing to appear silly, strange, downright unlikeable, and...

Much is made of her personal life (divorces, illegitimate adoptions, sexuality) but those issues are of little consequence given her overwhelming contributions to the arts - not the least of which is my favorite game show of all time, What's My Line?

Agnes Moorehead as the mystery guest on What's My Line? (1973)

Given all of this information, the question remains this Halloween season, "Which WITCH are you?"


From our coven to yours, Endora and I wish you a very peaceful and Happy Halloween!!!

I'm seriously considering changing the name of this blog to "True Confessions" - mostly because I have spent the last two months cleaning out the family garage.  You read that correctly - the last two months!  After nine donations to the thrift store, ten oversized trash barrels filled, four truckloads hauled away by a scrap metal company, a large hazardous-waste removal (paint, car fluids, chemicals, etc.), three take-what-you-want days for family and friends, and two illegal visit to a commercial dumpster, the garage could still appear as the "before" reel on an episode of Hoarders (a necessary preamble so as to set the scene for one of the most frightening experiences of my life).  Warning: It's about to get all American Horror Story up in here.


Many years ago, around Halloween time, I was working on a term paper for an Ethics class.  As I am wont to do, I put off the paper until the last minute, foolishly believing that the time constraint would inspire genius.  Distracted by the many wonders of a ceiling fan, I lollygagged in our spare room (a room that happens to share a wall with the garage) waiting for inspiration to strike.  As the fan circulated the air, it also began circulating a faint-but-foul odor throughout the four walls of my paper-writing prison.  Recognizing the importance of gazing endlessly into the void of Microsoft Word, I decided that the odor would be another problem for another day.  The following day, the temperatures rose in direct correlation to the threat level of the odor.  But papers must be written!  I vainly hoped that somebody else in the house would notice the smell first, allowing me to coyly bat my eyes and innocently respond, "What smell?" when they inquired if I had also picked up on the scent (because, you know, ethics).  Unfortunately, I was to learn later that I was up against champion contestants in the I-Smell-Nothing Game.  By the third day, neither the term paper nor the the smell were improving.

Now unlike the garage, the spare room is rather tidy with very few places for a lingering odor to hide out.  So, after a cursory inspection of my surroundings, I plodded outside to the garage.  The roll-up door retracted only an inch before I knew that the call was coming from INSIDE THE GARAGE!!!  Faced by mountains of boxes, a piano, surfboards, Christmas decorations, guitar parts, thrift store treasures, power tools, garden gnomes, and long-forgotten furniture pieces, I knew that the better part of my afternoon would be dedicated to ferreting out the unholy odor.  It became a real game of cat-and-mouse as nose-blindness set in.  Gingerly shifting the contents of the garage, I grew increasingly panicky as I waded deeper into the abyss.  Next to a tumbled tote of my Halloween decor, I found a few realistic ravens, some plastic spiders, and one of those hissing, black cats with the glaring eyes and bared teeth.  It wasn't until I leaned over to return it to the bin with the rest of the decorations that I remembered I didn't have a Halloween Cat!  Neighbors gathered after they heard the scream.

The call to Animal Control went something like this:

"Hi, um, [sniff] we have a cat in our garage...but it's not our cat.  Actually, I'm allergic to cats so we couldn't have a cat even if we wanted one.  Oh yeah, [sniff, sniff] and this cat is dead.  But we didn't kill it.  It's just dead.  And my sister and her husband moved to Hawaii and left half their stuff, so the garage is really full, so the cat is kinda hidden and I'm afraid of cats because I'm allergic to them.  So do you guys come and get cats?  Because we don't want it.  And also, we're not hoarders [sniff]."

Inspired by the Halloween season and a desire to fill the serious feline void I discovered in our holiday decor, I set out to make a proper, odor-free, Halloween Cat with materials found only in my fabric stash.


By the time I finished Le Chat Noir, I was reminded that as hard as I try, I will never be a "cat person."


Epilogue:  Just in case you were wondering, the Animal Control technician assured us that the cat was elderly and had died of natural causes.  He explained that often times cats, aware that the end of their ninth life is drawing nigh, will seek out a comfortable place to expire.  I was placated by his attestations of our innocence...but not by the fact that the cat's "comfortable place" was the cushion of the vintage sofa given to me by my grandmother.  Undoubtedly you've heard of the remarkable images imprinted on the Shroud of Turin; well, imagine the shroud is threadbare upholstery and instead of the vestigial visage of Christ our Lord, the shadowed simulacrum of a former feline.  Yep, I am definitely not a cat person.