When one is faced with a particularly-problematic dilemma, it is wise for one to remain calm, think about the situation objectively and make a prudent decision based on  the facts and a proper evaluation of the associated pros and cons.  I am anything but wise or prudent - especially when it comes to old movies.  That is why, when standing in the check-out line of the local grocery store, I bought Lady of Burlesque, starring Barbara Stanwyck.  As a rule, aside from the occasional pack of gum or mints, I generally refrain from impulse purchases at the register.  Since when are DVD's an impulse buy at Stater Bros. Supermarket?  Even though the DVD cover art appeared to be a child's crude, first attempt at Photoshop, I couldn't help myself.  As an rabid avid fan of old Hollywood, I have amassed a collection of close to 800 films.  Just when I thought I had seen everything, I hadn't.  In fact, there are so many movies that I haven't seen that my love affair with movies is sure to continue for a long time to come. 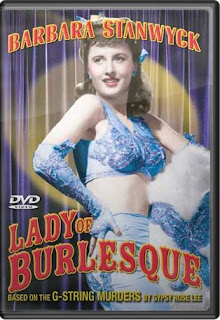 Barbara Stanwyck has never been one of my favorite stars - a little too pointy or something.  I enjoy some of her films - Ball of Fire, Double Indemnity, The Lady Eve - but I have never developed a connection to her as I have with other stars of Hollywood's Golden Era.  Maybe that is why I get some sort of subversive pleasure at the end of Sorry, Wrong Number.  Really, she kind of had it coming.  Am I right?  My favorite actresses tend to be wholesome stars like Deanna Durbin and Doris Day.  As I write, I realize that maybe my affinity for those particular female leads may have something to do with chubby cheeks and alliterative, "D" names. 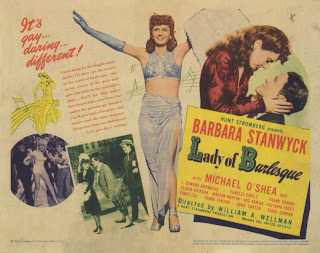 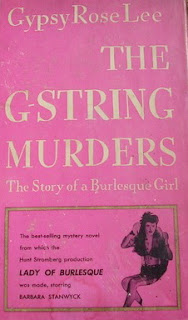 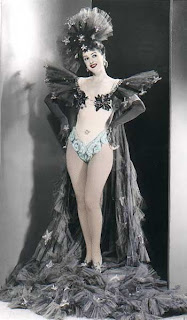 Lady of Burlesque is based on The G-String Murders:
The Story of a Burlesque Girl by Gypsy Rose Lee.
(I just bought a used copy on etsy!!!)

Lady of Burlesque is part murder mystery and part girly show.  Don't worry prudes, all the other good parts remain covered throughout the duration of the film!  Stanwyck plays Dixie Daisy, the most popular performer at The Old Opera House run by S.B. Foss.  She is the peace keeper with the Chinese restaurant next door, a rival of a couple of the "peelers" and mother hen to the rest, and the love interest of Michael O'Shea, a baggy-pants, burlesque comic.  "Everything's coming up roses" in Gypsy's ode to backstage burlesque until someone starts murdering the performers.  Everyone is a suspect and Dixie must play novice sleuth in order to save her own neck!  The proceedings are enjoyable and my admiration for Stanwyck actually grew as it is apparent that she sings all of her own songs and dances like a wiz!  That is why I love old Hollywood; the actors had to do more than look good.  Even straight, dramatic stars kept singing and hoofing in their proverbial "back pockets."


This clip shows the reprise of "Take it off the E-String."  Stanwyck, engaged in a "scene," and her fellow performers break into song to cover the backstage screams of another girl getting smacked around by her street-tough boyfriend.

Overall, Lady of Burlesque (1943) is the perfect movie for a rainy afternoon.  It incorporates wacky tacky elements like slapstick, great clothing (Dixie's costumes were designed by Edith Head) and strippin'.  It is a great, broad comedy and is a great comedy with broads!!!  It is reminiscent of Lady on a Train, another (and superior) movie from the same era that includes murder, mystery, comedy, amazing costumes and music.  Lady on a Train, stars who else, Deanna Durbin, and is one of my favorite movies of all time.  Both films employ some of Hollywood's finest character actors too.  If you like Lady of Burlesque, you are sure to like Lady on a Train, but don't take my word for it! 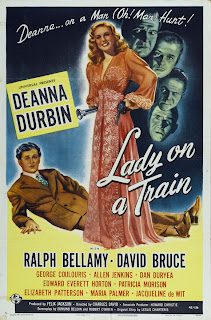 All Aboard: Tiny Train Takeover!

From picnics, to musical events, to stargazing at the observatory, we have spent our fair share of time in Griffith Park.  Our intention has always been to visit the park's miniature trains.  After hearing from a friend who gave the train a review of the most glowing sort, we decided that the time had come and we set out on the first leg of our miniature railway journey.  We made our way up to Griffith Park and after many diversions and forks in the road we found just what we were looking for - the Los Feliz Passenger Station.  We bought our tickets, waited in line, took pictures, talked to the engineer and left parents in line wondering why were there (and why we were more excited than most of the kids).  In short, we thoroughly enjoyed our excursion. 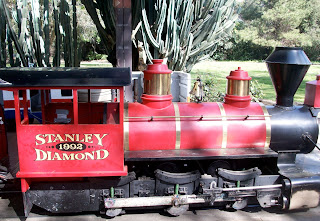 Somehow,  while still basking in the thrill of our railway ride, we discovered that this miniature train was the "wrong" miniature train.  Who knew that Griffith Park was home to more than one miniature train ride?  Our train was made up of individual cars similar to the ones used in Disneyland rides.  Apparently, the correct, and more interesting miniature train, is steam-operated, has cars that one must straddle and only operates on Sunday.  While somewhat disappointed that we didn't ride the trains that inspired Walt Disney and his gang, I am looking forward a follow up train trip.  Choo choo!! 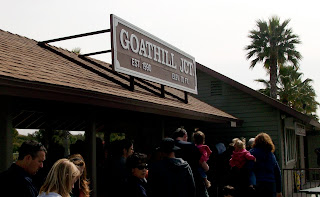 The next station stop on our scenic railway journey was Goathill Junction in Costa Mesa.  This miniature, steam train is run by the Orange County Model Engineers, model train enthusiasts who convinced the City of Costa Mesa to allow them use of public parklands in exchange for free rides to anyone who wanted a trip.  Because the tracks run through the unguarded park, there are no model towns or miniatures along the way and, in turn, the atmosphere is a little less inspired than the trains in Griffith Park.  The beauty of nature had to suffice!  Our friend Paul of Liberty Motor Wear joined on us on this trip; next time, with a little more planning, we will live Paul's dream of using cap pistols to rob the train while riding Shetland ponies.

My interest in trains and love of miniatures was definitely inspired by this cartoon. 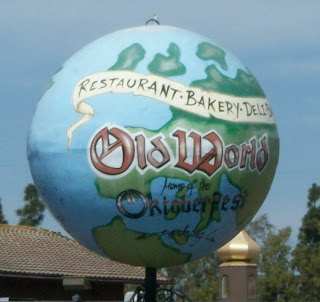 We are always on the lookout for cool places to go, interesting people to meet, neat projects to undertake and good food to eat.  We keep our finger on the pulse of the public and our ear to the ground. Which, as the old saying goes, leaves us in a rather vulnerable position.  Sometimes we get so caught up in what's "out there," we forget to look in our own back yard.  Inspired by some vintage snapshots passed on to us by our friend Lauren at Wearing History, we developed a sudden craving for pretzels, schnitzel mit noodles and crisp Apfelstrudel.


We needed a quick fix of German goodness.  We could have stayed home and just watched the footage of JFK's declaration, "Ich bin ein Berliner," but we wanted a more immersive experience.  Thus, we explored, and now feature for your enjoyment, our neighborhood treasure and well-known, if shamefully under-visited, Orange County landmark, Old World Village. 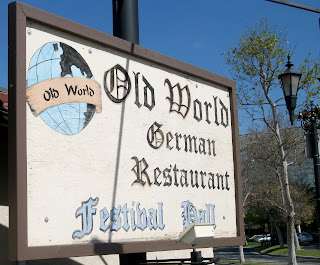 Old World was designed as a roadside attraction by German immigrant, Josef Bischof.  After settling in Huntington Beach, he began his faithful recreation of a small Bavarian town.  Opened in 1978, the village center is home to a grocery (complete with a butcher/deli counter, a bakery and a wide assortment of European delicacies), an active church (open regularly for worship services and weddings), a motel, a banquet hall, retail shops, restaurants, a salon, a bar and even apartments for rent. 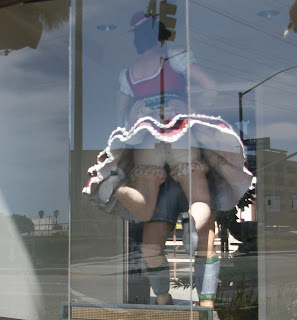 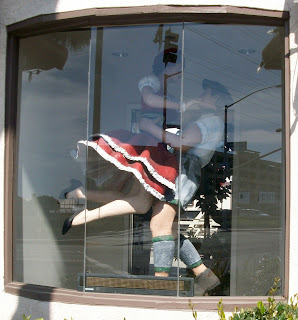 Old World is home to an odd assemblage of retail storefronts that, nine times out of ten, are closed. Visiting on a weekday, Old World is a veritable ghost town.  Even on the weekends, seeing another human being is a rarity and, aside from the occasional German patron quickly making their way from their Mercedes to the Market, one would quickly assume that this place is deserted.  Unfortunately, it sits in the long and looming shadow cast by the overgrown, ultra-modern retail center across the street and rumors of demolition are constantly swirling.  Sometimes, the creepy desolation works in its favor, however, and we pretend to be Jeremy and Jemima from Chitty Chitty Bang Bang just waiting for the Child Catcher to prance around the corner.


Old World used to be a bustling attraction.  In fact, it was once a ground zero for Orange County's punk scene.  Shows were a regular occurrence but episodes of underage drinking and violence eliminated all activities of that nature.  Several shop owners have tried to bring about a renaissance to Old World's flagging economy.  Scuda, a vintage clothing store, made an admirable attempt at attracting a younger demographic, but the foot traffic of OW was too weak and the lure of Long Beach's famed 4th Street just too strong.  Once a year, during September and October, the sleepy little village comes alive with Oktoberfest Celebrations.  Festivities include beer drinking, folk dancing and Dachshund Races!!! 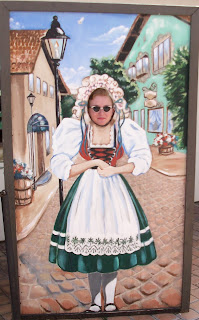 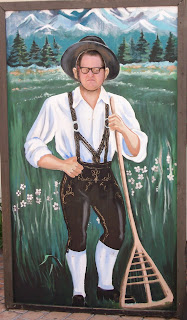 Our favorite stop is the market, where fresh-baked treats are to be had a uber-reasonable prices.

If you are ever in Huntington Beach, our advice is to skip overcrowded, under-clothed Main Street and head up Beach Boulevard to Old World Village. 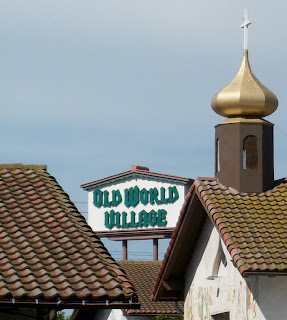