How often does it happen that you start out with every intention of creating a shimmering, '60s minidress... 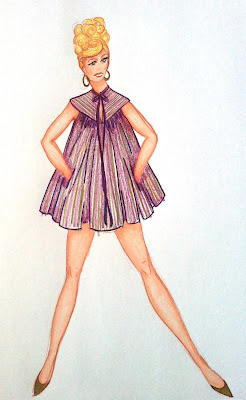 Only to end up - after hours of sewing and hand-finishing - with Jane Jetson's housecoat?

It probably didn't help that this Mr. Tiny Original was made out of a lightweight upholstery fabric featuring alternating stripes of purple and gold lamé (recognizable from Mary's red Happy Holiday Frock); the metallic fabric sewn into a Star Trekian v-shaped yoke only added to the mid-century, space-age sensibility.

Yes, Mary was fated to look like a dress-extra from that lesser known sci-fi masterpiece, Mars Needs Matrons.

I really should have seen this one coming.

Brainstorming for a way to elevate the humble housecoatery of my creation, I returned to the sewing machine and made a matching pair of fully-lined dance pants.

It was only then I realized that, when paired with the brevity of the hemline, the briefs only served to make the dress look like a '60s babydoll nightie.  Undeterred, Mary took the dress out for its first spin last year at Jonathan Toubin's Soul Clap at Downtown LA's Regent Theater.  So busy dancing were we that, of course, we photo'd not a single op.

Languishing among the racks of barely-worn Mr. Tiny creations, this dress came to mind when Mary was deciding on potential outfits for the Brian Wilson "Pet Sounds" concert we attended over the weekend.  As the event was the highlight of California's Mid-State Fair (and the lives of these two California kids), we attempted to make the most of our surroundings by making our way to the midway!


This dress marks the millionth time I have kidded Mary for rarely/never wearing the clothes I make for her.  After two nights out on the town, I tell myself that I am allowed to count this dress among my successes.  Without any resentment, I am satisfied if the future of this frock is relegated to becoming the futuristic housecoat it was always meant to be...I guess "[It] Just Wasn't Made for These Times."