Seeing Our Castles in Spain: A Trip to Barcelona

Having already told you about our experience at High Rockabilly, I thought I would break up the rest of our trip to Barcelona into a couple more posts.  At first I couldn't determine if a travelogue was appropriate for the blog because, to be perfectly honest, Barcelona isn't particularly wacky tacky, as we have come to define it.  After sifting through our photos, however, I came to realize that there is wacky tacky to be found in any part of the world, especially if we bring a little with us wherever we go.  WARNING: Be prepared for plenty of pictures!!!

Barcelona blew every expectation I had of the city out of the water.  I refuse to elaborate too much further because my misinformed surprise at the realities of Barcelona's culture could potentially be construed as offensive - unintentionally, of course.  Okay, one little thing...maybe two.  I live in Southern California, so close to the border with Mexico in fact, that my exposure to Mexican culture is quite ordinary, routine even.  I was more than a little surprised to travel so far yet still see representations of Mexico by way of both people and the six-and-a-half-foot-tall, fiberglass form of Mexican superstar, Cantinflas.

It was probably wrong to travel to a country with so many prejudicial expectations, but my imagination is always running in overdrive, so I couldn't help but construct a lengthy narrative of my whole trip before I even buckled my safety belt on the plane.  I have limited experience traveling abroad, but I have plenty of international contacts (trust me), and the general consensus is that Americans are fat - by very definition it seems.  It is hard to argue the point when I am so clearly "American" (ah, the joys of being a stereotype).  Given the mild disdain that I had so cleverly inferred from this characterization of my fellow countrymen, I was truly caught off guard to see quite a few portly Europeans.  Even more surprised after the amount of walking and stair climbing that is required of Barcelonians (?).  Truly, our Barcelona trip can be summed up in one photo...

While we were indulging our appetites, we were drawn to a rare site in Barcelona, a vintage store.


Some of the best money that we spent was on the Barcelona Bus Tour (a definite recommendation if you find yourself in Barcelona).  The buses run frequently and riders can get on and off the bus at stops all over the city to explore landmarks, museums, markets, and various points of interest.

One of our favorite stops was MNAC, the Museu Nacional d'Art de Catalunya.


Fortunately, photos were allowed inside MNAC so we could capture some of the masterpieces.  One gallery in particular seemed to have a very obvious focus, namely death.


Having a definite taste for the macabre, we indulged in one my favorite pastimes by making the next stop on our bus tour Barcelona's oldest cemetery.

The theme continued as we naively disembarked the bus again to check out a local market where the foul odor of death hung heavy in the air. 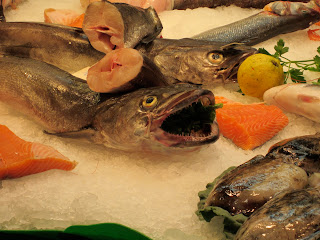 Given all of the death, artistic and otherwise, we were convinced that vegan was the way to go - for dinner at least.  We ended up at Cat Bar in Barri Gotic, Barcelona's Gothic quarter (my favorite part of town).


Espadrilles are the official shoe of Catalunya, or something; we created fun facts like this based on our observations during Catalan Independence Day.  Yep, we were lucky enough to be there on the day that just about every resident of Barcelona took to the streets to declare their symbolic independence from Spain and Marco's regime. 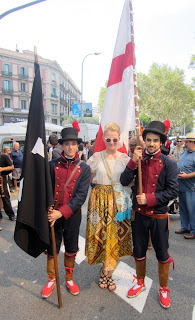 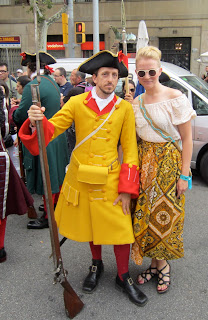 We set out with no plan and immediately ran into historical recreationists
taking part in the day's festivities, parades, and protests.

Despite news reports around the world (we received a few concerned facebook messages), everything seemed pretty peaceful and we were fearful of neither the protests nor the demonstrations.  It was hard to distinguish a protestor from a reveler anyhow as everyone was draped in some version of the Catalan flag.  We thought about getting a flag to join in the fun, but they were 10 euros apiece.  We settled for the free balloons and the independence themed posters that were being handed out on every corner.


Everyone was on hand including dignitaries, local politicians, and Barcelona's biggest celebrities, the Castellers, or as I referred to them, the "people stackers."


This was the third demonstration of stacking that we had seen and we had only been in town about twenty four hours.  Every souvenir item that we saw referenced the people stackers - usually as the center panel of a tea towel or tablecloth.  The residents of Barcelona get so worked up by the stacking of people that suddenly, without warning, they can - and will - break out into the national anthem.

Oddly enough, until that moment, this was some of the only music we had heard in Barcelona.  I had expected (wished for) gypsy guitars and flamenco dancers and folk music and Euro pop, but we got a lot of silence and a bit of American Top 40 when we wandered into retail shops.  Convinced that we would set Barcelona's world on fire with our music, we set to busking.  We picked a pretty well traversed area in front of our favorite Gothic cathedral,  the Catedral de Barcelona, and started singing.  I guess other countries don't appreciate American roots music and western swing as much as we thought they would.

We heard the call of jazz, real, live JAZZ!
The New Orleans Ragamuffins
(many more videos of this group can be seen on youtube)


It was not only music to our ears, but our hearts and souls as well. After five solid days of rockabilly followed by deafening silence, we needed to hear something sweet.  The NORs got our toes tapping and before we knew it, we were dancing in the street.  Given the dumbfounded gazes and the frantic searches for cameras, one might have thought that aliens had landed, but it was just two giant weirdos dancing in the streets of Barcelona - and having a great time.  Mary bought their CD, and while we could could have listened to them for hours, before too long, they closed the lid on the piano and rolled it away.  But Jazz wasn't to be the only offering on the day's program...

The rest of these photos (yes, there's more) are less of chronological narrative (actually very little of this post has been in chronological order but how you know that unless you paying very close attention to costume changes) and more a representation of what I deem to be funny - wacky tacky, even - pictures from our adventures around Barcelona. 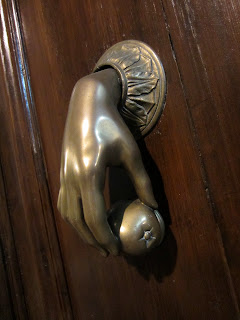 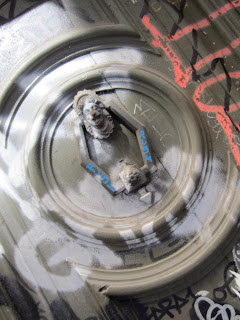 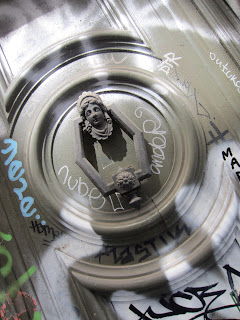 Get a load of those knockers!!!
These antique doors were covered with graffiti.  I think Europeans see so much history around every corner that it doesn't always occur to them how special it all is.  Case in point, shortly after seeing this cool hardware, we saw trashmen picking up a door with all of the hardware intact that was a least three centuries old, and chucking it in the back of their trash-compacting truck.  Have they never heard of architectural salvage?  If we were smart we would go back to Europe on trash digging trips; In California, that "trash" would easily have been worth thousands of dollars!

Heavyhearted, we hopped a cab to the airport for our LONG journey home.  Mary bought many a souvenir, so to make sure her baggage would fall under the maximum weight, I loaded up my suitcase to capacity.  I'll give you one guess as to whose bag was overweight...they say that luggage and their owners start to look alike after awhile. Wouldn't you know that I, the one who packed light and was entirely ready the night before, had to kneel on the cold floor of the airport and sift through my dirty clothes as I layered on shirts, put on two belts, and played Sophie's Choice with my shoes so we could make it back home without the 100 euro surchage!  The nice agent at the Lufthansa desk instructed me to remove 4 kilos from my bag.  Embarrassed, I had to politely ask her what a "kilo" was (blast you American public school education!!!).  The pitying look she gave me quickly turned to scorn when I told her that the only thing Americans measure in kilos is cocaine.  In the end, we redistributed things among the luggage and made it home safe and sound, but not before a heartbreaking layover in Germany.

Spain is a marvel and it really turned all of my expectations on their ear; I guess one can only glean so much cultural information from watching Disney's Ferdinand the Bull and the occasional Esteban infomercial.  Honestly, despite what the song says, I saw castles rising in Spain, that I NEVER would have seen through my windowpane.  In fact, I saw Spanish birds with feathers of blue AND green that had never been waiting for me before.  After a couple weeks of being home, however, I guess it is true that my happiness lies, right under my eyes, back in my own backyard!

"Back In Your Own Backyard" - Russ Columbo

Can you believe that this is not even half of what we saw in just over three days?  Stay tuned for the final post of our Spanish adventure featuring the King of Barcelona's wacky tacky scene, Antoni Gaudi!

p.s. Do I win some kind of prize for the longest, most-boring post in the history of blogger???