West Virginia radio listeners have essentially two options - and if one is not a fan of contemporary country stations (Mr. Tiny is not), one had better be a fan of gospel music.  On one of our adventure days we tuned into WMLJ 90.5FM's "Gospel Hour;"  I feel like a higher power was involved in the choosing of that particular station because we were treated to an old-timey broadcast that included twin-sister accordion players, a trio of girls singing about the devil jumping with glee when they forgot to say their prayers, and the story of Baa Baa, the pet sheep of a "backward" young boy, Dave, who taught his father that every sheep is important when one is "looking with the eye of love."  Dave's father (who treated poor Davy with total disdain) learned a valuable lesson after Dave stayed out in the rain to rescue the injured and lost Baa Baa.  He said, "Now I can understand what a good shepherd really is, one who will leave the ninety-and-nine and will look for the one who has been lost from the fold."  Christian kitsch - why don't we have more stuff like this in California???

We grew up in a strongly religious household but I guess living in California made us comparatively-casual observers when judged against the fervent piety displayed throughout the American South.  West Virginia is about as far north as one can get before becoming Yankee-fied, but based on the signs we were seeing, it was clear that it was time to tighten our "Bible Belt."  Much attention has already been given to the clever messages churches create on their marquees, but we just don't have anything like that in our neighborhood.  In fact, our neighborhood (small by California standards) dwarfs the population of West Virginia's capitol city and yet there are more churches per capita in a tiny West Virginia town than any city in California.  Therefore, I was utterly captivated by the signs and the sentiments.

Some signs are simple and straight forward.

Some signs are trying...but not quite hard enough.

And some signs are just downright brutal in their directness.


Our favorites, of course, are of the more clever variety

Then there are the signs that are so "clever" that the message is totally obscured.

Even when its tongue is in its cheek (I hope it turns the other cheek after reading this post), it is clear to me that West Virginia takes its Christianity VERY seriously; the signs and the intentional year-round Christmas decorations (seriously, wreaths, garlands, and fully-lit Christmas trees) make it a wacky tacky miracle to behold.

Inspired by the religious zeal, my sister wanted me to go to a tent revival at one of those Pentecostal churches and write a blog about snake handling and speaking in tongues...but I was too scared.

"Open Up Your Heart and Let The Sunshine In"
Oh my gosh...that trio was The McGuire Sisters!!!!

Well, don't forget to "Let The Sunshine In."  See ya in church!

Don't Be Hatin' on Bloglovin'

I honestly have no idea what Bloglovin' does or doesn't do but it seems like the tide is turning that way. What am I if I am not a sheep?  I just follow the rules and the rules stated that I needed to claim my blog and paste this code in the post???  I hope this isn't some kind of virus and that I'm not erasing all of my posts.  It goes against my blogging principles to waste a whole post on something like this but sometimes you just can't fight the man!  We'll see what happens...

Living in Southern California, the veritable epicenter of car culture, one might suspect that drive-in restaurants are the de facto method of food service.  In facto, though the concept seems so simple, so charming, and so suited to California's climate, drive-ins are an extremely rare sight.  I don't know why I think drive-ins are so cool; going to a drive-in restaurant is really just a belabored, protracted drive-thru experience with none of the convenience of eating at a proper table and none of the cinematic atmosphere promised by American Graffiti.  Nevertheless, I am always searching for old drive-ins, hoping to capture the nostalgia of warm summer nights, roller skates, and good, old-fashioned junk food.

My overly-romantic notion of drive-ins is no doubt influenced by the opening scene in Moon Over Miami.  It's no wonder then that I'm always slightly deflated when the server at a real life drive-in isn't Betty Grable and she isn't singing the menu to me.  I guess it would be too much to ask that she be clad in 1940's western wear.

"What Can I Do for You?" - Betty Grable &
Carole Landis from Moon Over Miami

When my sister explained that there was an authentic drive-in restaurant very near her new home, I was equally excited and disappointed - excited because it sounded perfect, disappointed because in all of the research I had done in preparation for my trip to West Virginia I had seen absolutely no reference to King Tut Drive-In in Beckley, WV.


The look of King Tut is rather, er,...strange.  Long, weathered pickets create a fence-like facade while blue steel beams support a carport structure with a corrugated roof.  It looked more like a tree house than a longstanding eatery.  Learning that it has been in operation for the last 70 years (under current ownership for nearly 60), I wondered if the rusticity of King Tut's current facade didn't hide some really outstanding Egyptian theming.

If King Tut Drive-In isn't known for its stunning curb appeal, it is known for its down-home food.  Hand-formed hamburger patties, real ice cream milkshakes, fresh homemade pies, and full dinners are among the most highly-favored menu items. 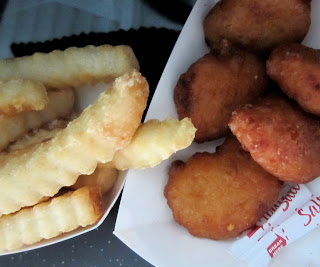 There is so much to like about King Tut but our best recommendation is to get there early.  Since everything is freshly made on site, there is a limited supply and popular items do sell out.  We went through a few rounds of ordering before settling on what they had in rich supply.   If there is another recommendation to be made, it is to NOT pull up wearing heavily kohl-rimmed eyes, presenting your Alexandria Library card; this ain't ancient Egypt!!!  And whatever you do, don't "ankh" your horn, the protocol at the drive-in is to flash your lights for service.

If you're in West Virginia, then get on over to King Tut Drive-In; it's food fit for a pharaoh...as long as that pharaoh is not insulin dependent. 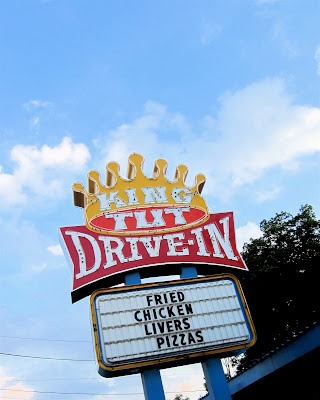 The Lost World Caverns: Going to The Land of The Lost

The modern story of The Lost World Caverns in Lewisburg, West Virginia begins on a farm in the early 20th Century.  Surveying his land, a local farmer found a hole in the ground; while this appears to be a less-than-Salk-worthy discovery, it proved a valuable commodity to a man who had little resources when it came to waste disposal.  Examining the hole, he realized that it was the perfect size for eliminating farm refuse - including bovine carcasses.  Where did it all go once down the hole?  The farmer didn't care; he just knew that it took a long time for anything to hit the bottom and that his trash troubles were over.  For years this practice continued until other caves and underground water supplies were being discovered in the surrounding area.  In 1942, two college students were lowered on ropes into the mysterious darkness of the hole and what they saw (once they finished removing the filth of 1,000 rotting cows from their shoes) was another world - The Lost World!

Intent on making some discoveries of my own, I too braved the abyss.

The real discovery in this adventure is that my resolute dispassion for the study of geology was abandoned for a genuine excitement over rock formations.  I hope that it carries over into the reading of this post because there are plenty of geological wonders ahead!


Under most circumstances, an invitation to trek down into a dank, musty hole in the ground would have me in a light jog toward the nearest Cinnabon.  For some reason, however, The Lost World Caverns made me feel like I had finally come home... 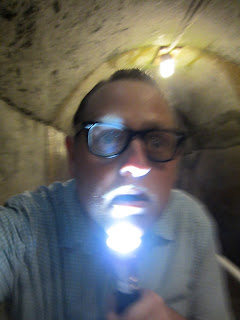 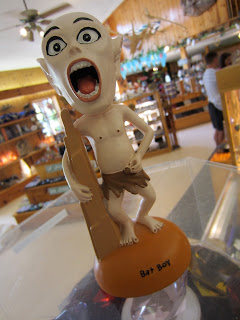 I guess I no longer have to wonder about my genealogy...

If you love nature and weird roadside attractions, then the Lost World Caverns might just be right up your alley...or down your hole.

"The Land of The Lost" 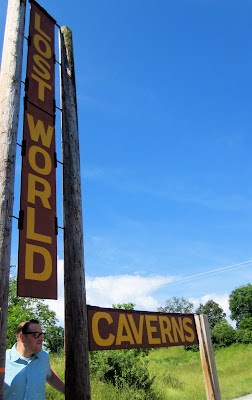