We've made no secret of it around here that our two very-favorite trims in all of fabric land are ric rac and pom poms.  If there is ever a way to include them both in a wacky tacky "Sew What?!" project, Mr. Tiny will find it!


I don't know that I'll ever understand my thought process but for some reason this ensemble reminded me of something a mid-century fashion maven would have worn on safari.  Since we're a long way from the Serengeti, we were going to have to settle for a suburban safari.


Although she'll probably be extremely chagrinned that I chose this particular musical accompaniment, I couldn't help but think of Henry Mancini's classic to underscore our suburban safari!  HATARI!!!

What do you wear on safari - urban, suburban, or otherwise?  Do you think you think neon tangerine, olive green, and shades of pink are a Sub-Saharan sensation or a victim of the veld? 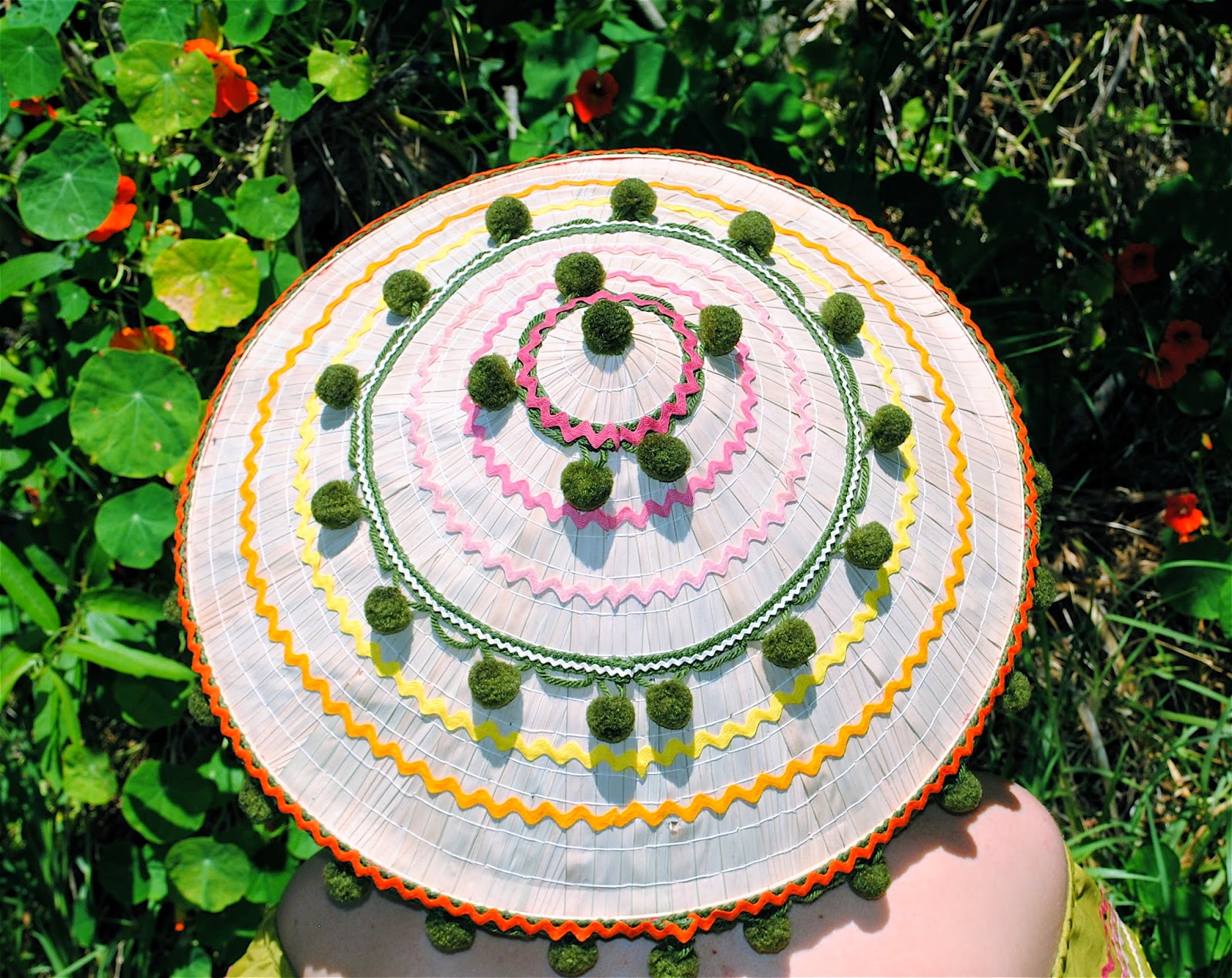 It's funny how certain facets of human philosophy can so completely evade one's consciousness until the door to enlightenment is opened just a crack.  Once even the tiniest glimmer of information is revealed, it then seems practically impossible to avoid the glaring light of related scholarship.

I recently completed reading a biography of L. Frank Baum, entitled Finding Oz.  The book chronicles the trajectory of Baum's famous Land of Oz by citing meaningful moments in his personal history.   Many of his novels' themes derive from the author's adult conversion to a metaphysical philosophy known as Theosophy.  Before reading the book, I don't think I had ever heard of Theosophy; in one sentence, it is the belief that God's wisdom "may be achieved through spiritual ecstasy" and "direct intuition."  My personal take on it is that Theosophy is a kind of well-intentioned, if far-out, combination of the best of Eastern and Western religious/philosophical precepts with a dash of the occult thrown in for good, mystical measure.


Now we don't often get into heavy discussions of religion and philosophy at wacky tacky, but on a recent drive to a family get-together, the strangeness of the bright-white, dodecagonal, domed building high atop a hill in Oceanside, CA led to a serendipitous meeting of philosophy, literature, architecture, and wacky tacky holy rollin'. 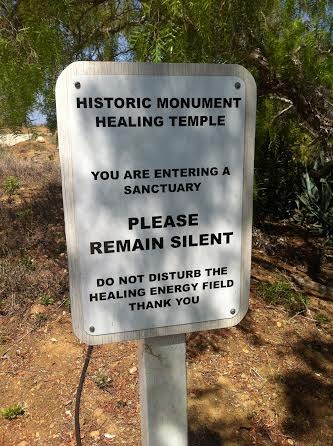 Like Dorothy being led to The Emerald City, we were drawn to the mysterious, mountaintop structure that we spied as we zoomed down our own sort of yellow-brick road.  Little did we know upon reaching our destination that we had risen to the top of Mount Ecclesia, the world headquarters of the Rosicrucian Fellowship.  I had heard the word "Rosicrucian" before but had no idea what it meant.  As it happens, the mystical branch of Christian philosophy is inexorably linked to Theosophy.  Based on ancient wisdom as interpreted by a 14th-Century, German philosopher, the 20th-Century incarnation of Rosicrucianism draws heavily upon the beliefs of theosophists, like L. Frank Baum.

Lest one think that the hippy movement began in the 1960s, Rosicrucians' strong embrace of pacifism, vegetarianism, and an earnest preparedness for the coming of the Age of Aquarius predates fringed vests and Hair by decades, if not centuries.  Self-branded as "An Association of Christain Mystics," the fellowship has a strong belief in healing through a legacy of secret, ancient truths as presented by founder, Max Heindel.


Rosicrucianism seems a little bit spooky at first; really though, once most religions/philosophies are broken down into their most elemental parts, they all come across as a little spooky and hard-to-believe, don't they?  Esoteric Christianity, while difficult for me to fully grasp, is an area of philosophy with which I am pleased to have become acquainted.  At the very least it will up my game when I play Jeopardy with the TV.

Before reading Finding Oz, esoteric Christianity was not on my radar; post-read, it seems that I see Theosophy everywhere - but I'm not complaining.  I mean, who doesn't love a good medieval, Egyptian, Christian, occult, Masonic, hippy, astrological, conspiracy-laden philosophy that begins and ends with The Wizard of Oz?

I'm not so sure that Mr. Tiny will be partaking of the Rosicrucian Kool-Aid any time soon, but I really do encourage and appreciate anyone's search for truth.  Should Rosicrucianism's basic tenets truly be self-improvement, altruism, and the pursuit of universal wisdom, well, then that's good enough for Mr. Tiny.  Anytime that "peace will guide the planet and love will steer the stars," we're ready to take a backseat to whomever is driving.  But maybe that's just me looking at the world through Rosicrucian-colored glasses.


"The Age of Aquarius" - The 5th Dimension 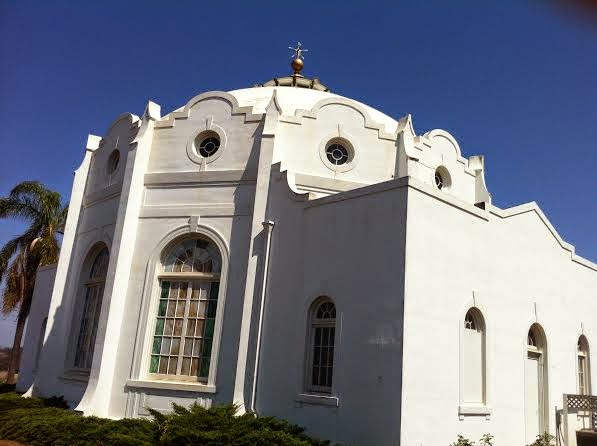 Signs of the Times: Thunderbird Lodge

It feels slightly disingenuous to issue complaints about how unbearably unseasonably warm it has been this week.  After all, Southern California is often the object of ridicule for its pathetic lack of seasonal changes; we have summer...and two or three days scattered throughout the year that try desperately to disprove the jibes of our climate-challenged neighbors to the north and to the east.  At this point, I suppose that I should be used to the blistering sun and chapped lips but it comes as a surprise every year.  And all I know is that it is HOT!  We're talking 100+ degrees!  Early May should be the time for blossoming trees and twittering birds and cool spring breezes.  Instead we are treated to wildfires, roadkill, and drought.

I know I shouldn't be complaining, but try telling that to my crimson complexion and puddles of perspiration.  Afraid to even switch on a light for fear of the additional heat output of an incandescent bulb (I guess we really should have switched to those corkscrew compact fluorescents), we oft take to the only space we have that has been blessed with air conditioning - the wacky wagon!  Everyone knows that the best distraction from flop sweats is a good, old-fashioned wander.


Okay, so the A/C in the wacky wagon has seen better days but the windows do go up and down; as long as there is air circulation and incredible signage, I am far less inclined to weather-related whining.  Oddly beckoned to even hotter climes, I was completely refreshed by the coolness of the brilliant-blue letter blocks and neon thunderbird of Riverside, CA's Thunderbird Lodge (est. 1960).  Preceding the ultra-hip Southwest aesthetic of the last few years by several decades, the Thunderbird proves that a classic look will never go out of style.

Conveniently located near Riverside's many tourist attractions, I am now seriously second guessing my decision not to book one of Thunderbird Lodge's reasonably-priced rooms, if only for the sweet, sweet air conditioning.  Plus, when was the last time I had a proper "Continental Breakfast?" 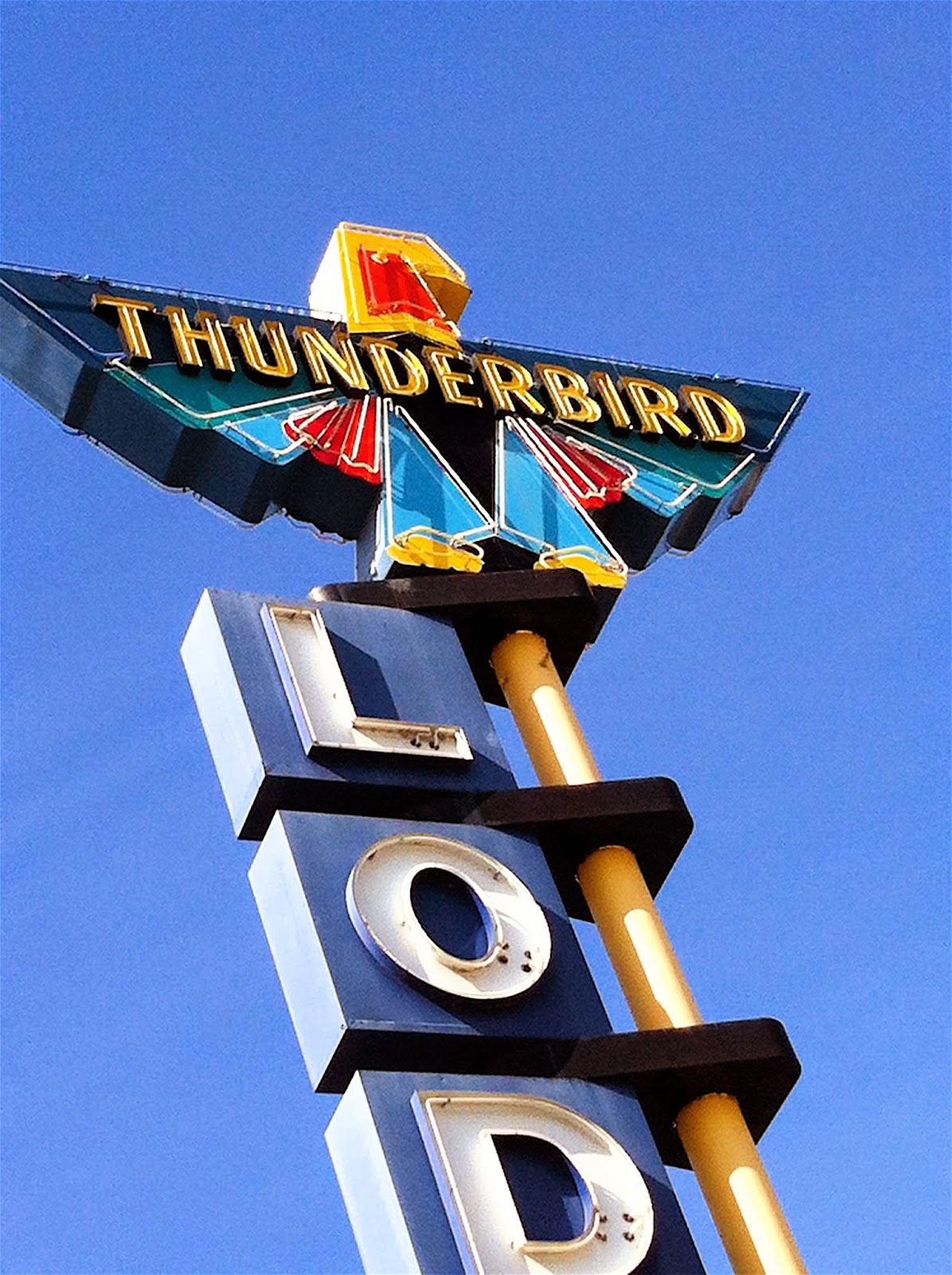 Call it stunted growth.  Call it arrested development.  There are certain rites of passage that, gone un-passed, result in an inhibited, regressive, emotionally-hobbled, curiously-craft-obsessed man-boy.


Would you believe me if I told you that I had never dyed macaroni for Mother's Day jewelry making?  Never.  Not ever.  How does one rebound from bypassing such a fundamental step in childhood development?  I didn't know where to begin.  It was clear that recovery would be a process requiring professional help - not from a therapist, rather from my dear friend, a preschool teacher.  Her counsel left me confident that my crafting skills were on par with those of her four-year-old students.

All that was left to do was string the pasta with coordinating yarn and make my mom promise to wear her Mother's Day present all day, in public, sight unseen (insert sinister laughter here).  I, of course, was quick to remedy the simplicity of brightly-colored, oversized, tube pasta with what is quickly becoming my signature adornment, the yarn pom pom!

Even after all of that necklace, I still ended up with a few rogue pieces of pigmented pasta.  Hating to waste, I decided to incorporate them into the design of our Mother's Day table.


Happy Mother's Day to my wonderful Mom!  Among many other gifts, she has bestowed upon me the opportunity to right a wrong that has hounded me for a lifetime.  Making a dyed-macaroni necklace takes me one step closer to developmental equality with my peers and endows me with a greater appreciation for pre-kindergarten craftiness.  Thanks, Mom!