For no significant reason whatsoever - besides the life-spice that is variety - I am always reticent to put two posts of the same category one immediately after the other.  In this instance, however, an anxiousness to share the beautiful fruits of a successful group effort has me abandoning my stance and bringing you a very special "Sew What?!"

My mentailty in design is best diagnosed as schizophrenic; one day I'll be appliquéing an angel fish silhouette to a beach ensemble and the next day I'll be hemming a bias-cut evening gown or sewing pom-pom trim to the hem of high-waisted capri pants.  Were I ever to create a cohesive collection, I know that the inspirational through-line would be found at the intersection of ethnic and bohemian fashions - a little corner that I like to call "Folk Couture."

Just to prove that we aren't afraid of trying something new, we decided to collaborate with our good pal, Fabian Fioto (remember that name), to see if we could elevate my humble stitchery to something a little more refined.  With no particular destination in mind, we loaded up Fabian's '55 Buick and started scouting locations for a day of photography, featuring the latest from Mr. Tiny's workshop.

With Mary as model, Fabian behind the lens, and Mr. Tiny as stylist and PA (I'm a whiz at holding a reflector), we found the perfect setting at Los Rios Historic District in the shadow of the Mission San Juan Capistrano. 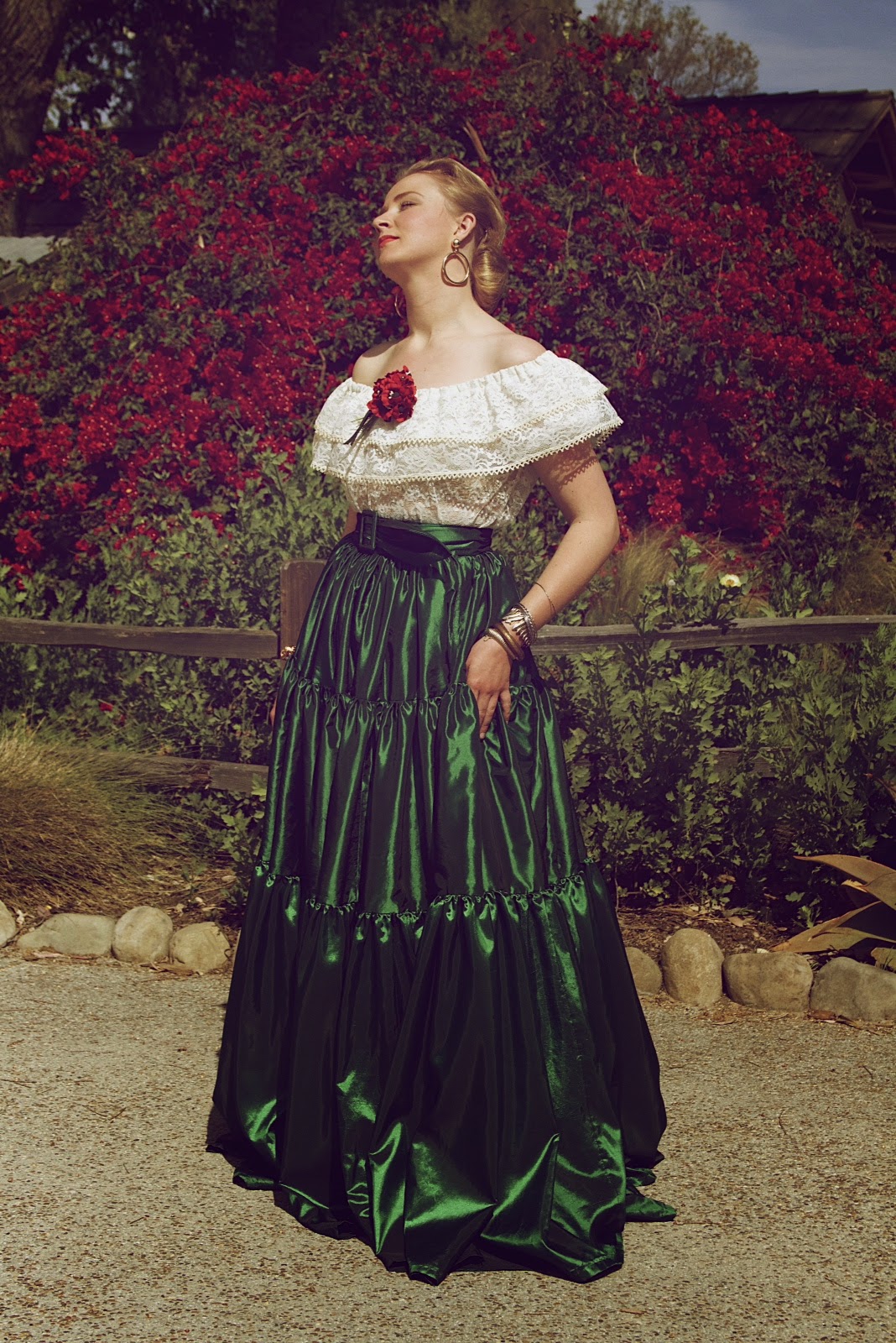 I'm still in the beginning stages of learning to be flexible when it comes to a rigid adherence to my original color story; after so many vain searches for something that only exists in my mind, I am getting more limber - creatively speaking - with every project.  Failing to find the perfect buttercup yellow for the skirt, I settled on a green taffeta that I found for four dollars per yard (a definite splurge by wacky tacky standards).  For many, four dollars per yard is not a price too dear; in fact it might seem downright cheap; it has always been my feeling though that a guaranteed way to make inexpensive fabric look luxurious is simply to use lots and lots of it!  The peasant blouse is made from an ivory lace remnant that was a hand-me-down from my grandma, with ruffles finished in a tatted trim found at my favorite hole-in-the-wall, Mexican fabric store.


I don't know if the experience is unique to me, but I am genuinely excited about everything I sew...until the project is finished.  Once a garment has been completed, the momentum is gone.  It is then that I begin to pick apart all of the imperfections and acknowledge the astounding lack of technique.  This ensemble, however, is one of my favorite things that I've ever sewn for Mary; it probably has as much to do with the feeling that I've embraced my favorite design sensibility as it does with finally seeing a finished project fully realized in beautiful photographs. 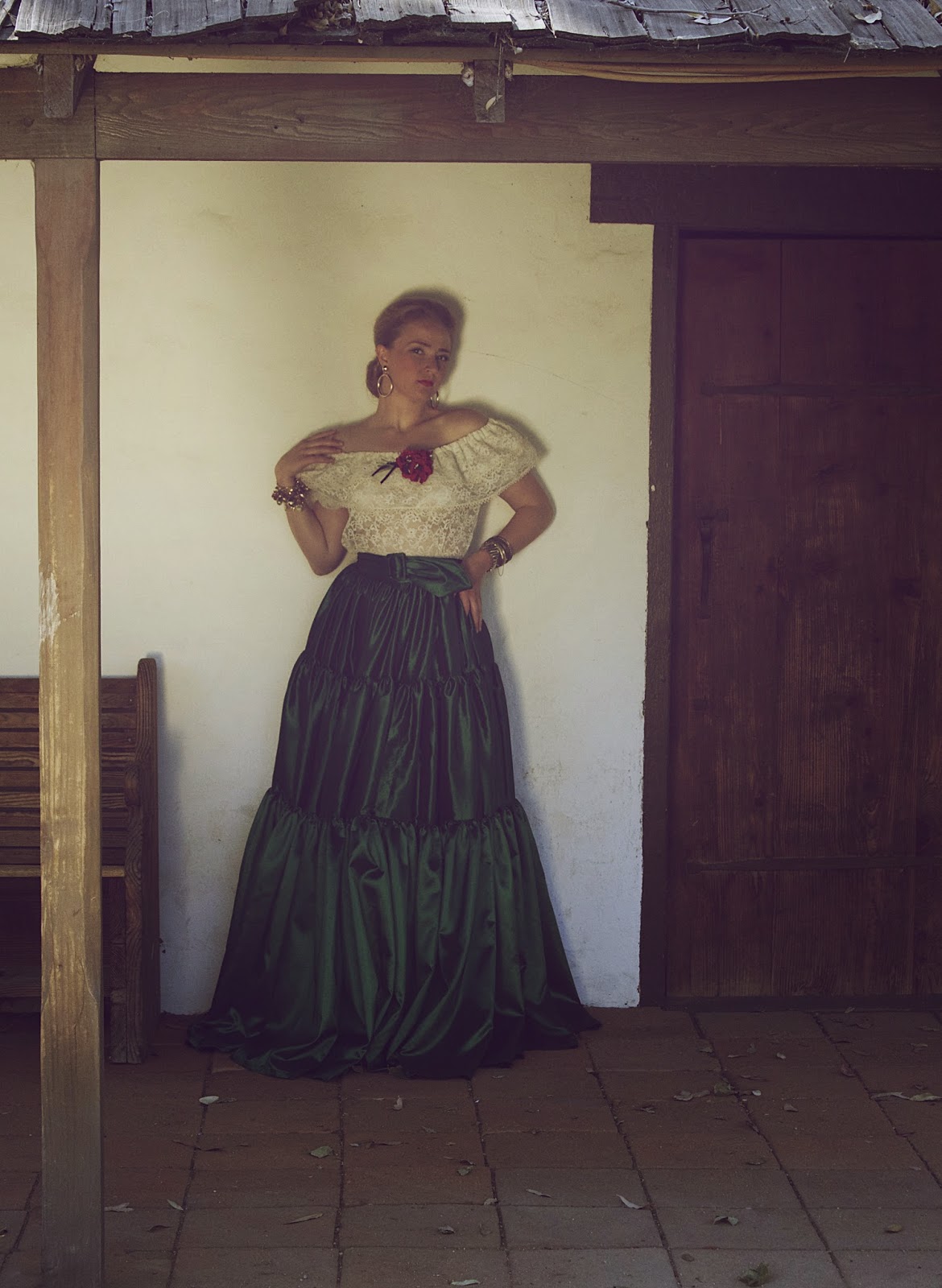 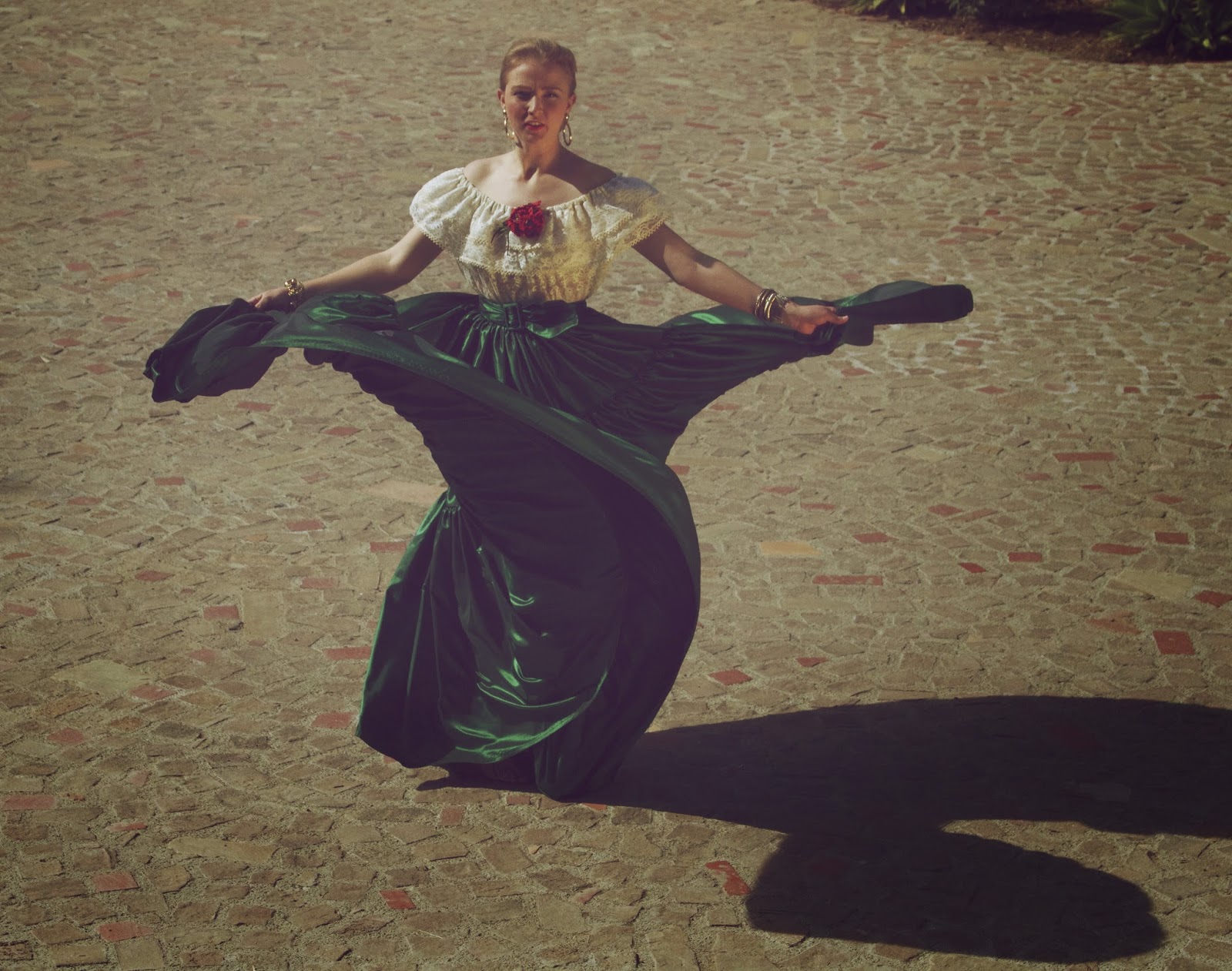 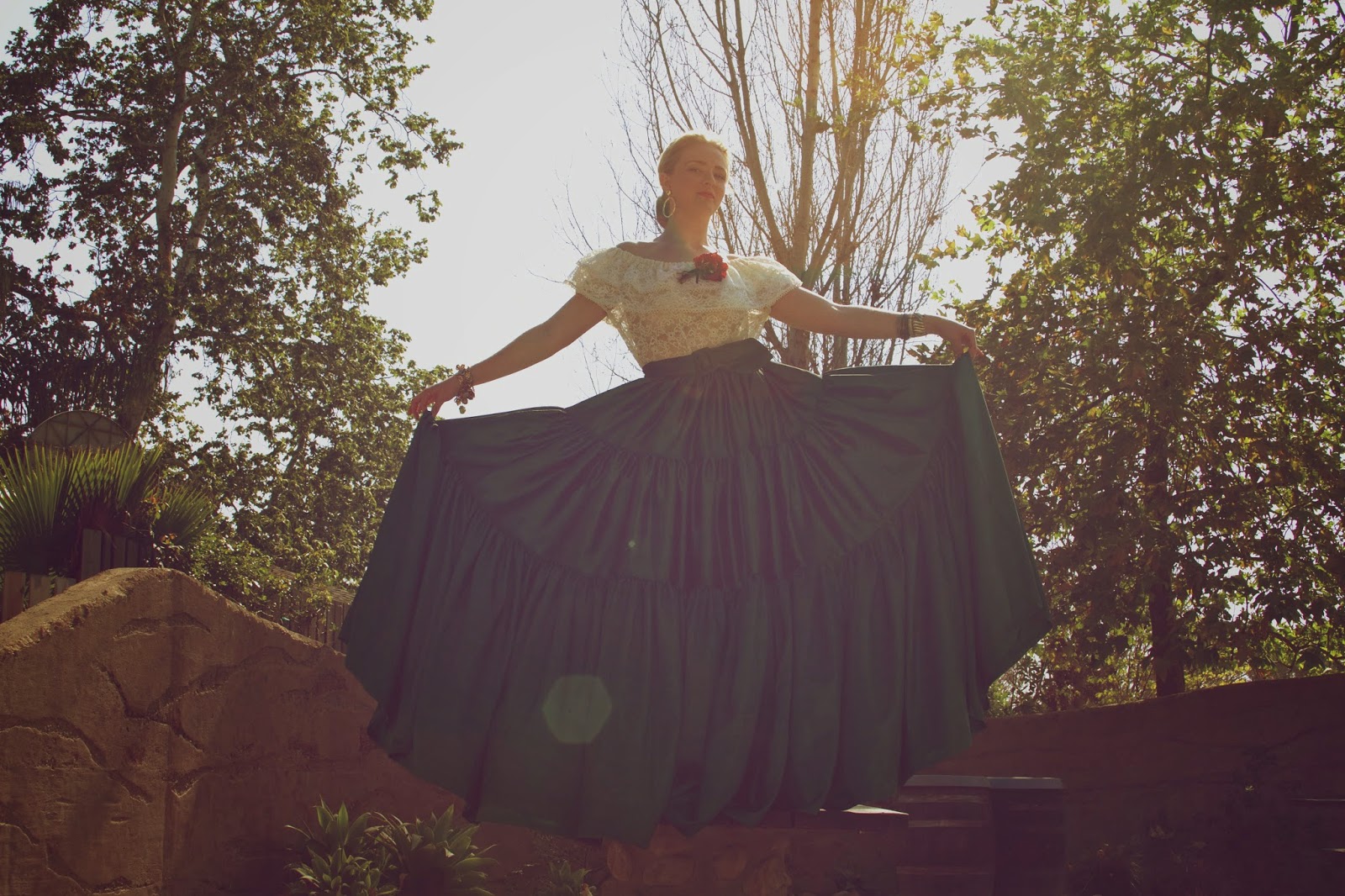 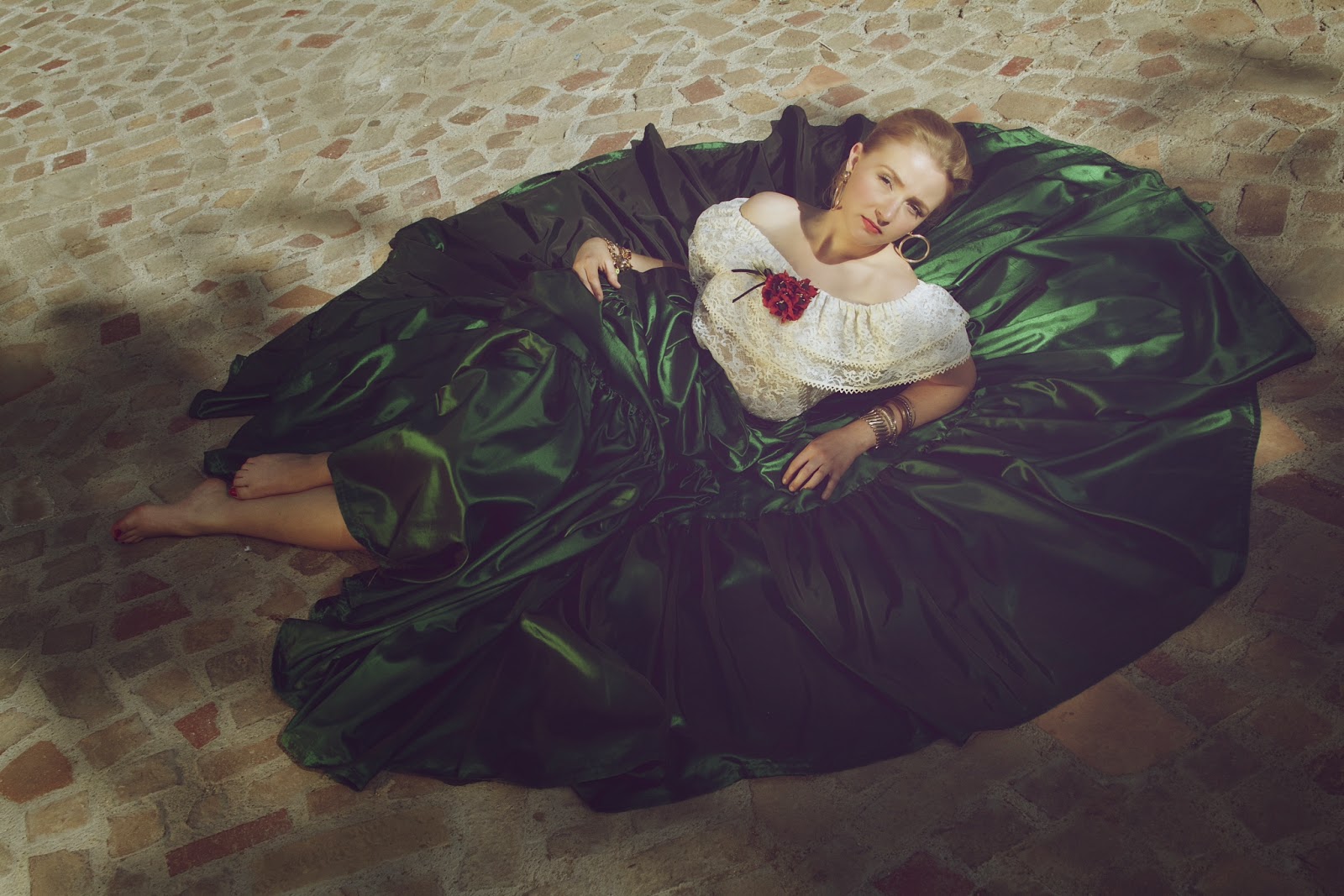 Well, what do you think?  Are you a fan of folk couture?  How do you think we handled our first attempt at a proper photo shoot?  I knew that good lighting, solid camera equipment, and a skilled technician would make a substantive difference from our usual last-minute, front-yard snapshots but I was not prepared for just how significant that difference would be.  I am so impressed with Mary's modeling (she apparently reserves her effort for professionals) and Fabian's camera work (a great director and visionary).

A huge thanks to my wacky tacky compatriots for making this lone wolf feel like a real collaborator!!!

Sew What?! Sarong That It's Right

As is the case with most home-garment-construction workers (a new phrase I've coined to make my chosen hobby sound more masculine and avoid the easily misread, "sewer"), I go through periods of inspirational and motivational drought.  Months will pass before I realize that beyond some minor mending, I haven't sewn a single stitch.

As it inevitably does, the pendulum has a way of swinging back to the opposite extreme and I find myself chained to my trusty Bernina, forgoing wild nights in the pursuit of wild, wacky tacky wear.  I often refer to my sewing area as "Mr. Tiny's workshop;" when it more closely resembles "Mr. Tiny's Sweatshop," however, I begin to sympathize with Betty Hutton.

"The Sewing Machine" - Betty Hutton in
The Perils of Pauline (1947)

Currently in the midst of a sewing binge, I am doing my best to cut through the huge stash of fabric that I have been amassing.  For years I have been successfully whittling away at the yards and yards and yards and yards of a particular Marimekko print that I happened to buy at very deep discount in every available colorway.  The 1960 print from the Finnish manufacturer is called "Tulipunainen" which, according to a very perfunctory Google search, translates to "vermilion" - although one shouldn't expect an accurate representation of color here because every picture I upload seems to change color drastically.

Even though it is of decidedly-Scandinavian origin, I can't help but get a tropical inspiration every time I see this print; I like to think of Tulipunainen as the Thor Heyerdahl of the fabric world.

With all the boldness of one of 20th-Century tiki's founding fathers, I set out on my own polynesian adventure to discover if I could create a two-piece semi-sarong(ish) outfit for Mary.


While technically not a sarong (the skirt does not wrap, the front panel is just a large drape), Mary felt it wasn't so-wrong and decided to wear it mere moments after I finished sewing on the last button.


Do you sew?  Have you been stuck at your sewing machine lately?  Have you ever made a sarong-style outfit?  Does this Finnish fabric have you singing Aloha 'Oe?  Until the next time I get a break from my self-imposed sweatshop, I'll settle for that lilting, island melody as played on the electric organ.

St. Patrick's Day always makes me wonder what the Irish think of our antics - the mad rush for corned beef brisket, the boiled cabbage, the marshmallows and instant pistachio pudding...  That's part of everyone's St. Paddy's dinner menu, right?  Well, it always is at our March 17 festivities.

Among the many other offerings that have little-to-nothing to do with genuine Irish cuisine, a healthy concoction of non-dairy whipped topping, pistachio pudding, crushed pineapple, and marshmallows that we so cleverly refer to as "Green Fluff" takes pride of place next to the dyed-green beverages and other obligatory St. Patrick's Day staples.


In looking up information on the origins of this dessert (my grandmother was creative but with a blender absent from the necessary tools for this recipe, I knew it couldn't have been born of her imagination), I discovered that Green Fluff is an American creation of 1970's pedigree, better known by its era-appropriate moniker, "Watergate Salad" (leave it to our great nation to define something with negative nutritional value as a salad).

Kraft Foods lays claim to the creation of Watergate Salad but I like to believe the version of events that gives credit to a crafty sous-chef at Washington, D.C.'s own Watergate Hotel...yes, that Watergate Hotel.  Upon further investigation, I learned that there was also a recipe for a pistachio-pudding-based Watergate Cake.  As if Watergate Salad wasn't scandalous enough, my favorite one-liner about the cake is that it has "a cover-up frosting and is full of nuts."


wacky tacky is proud to remain politically-neutral on most occasions; as Richard Nixon's name generally elicits discussions of corruption and unsavory political practices, we thought it would be more fun to implicate him in the sweetness of our own culinary crimes.  Combining the frothiness of Watergate Salad with the green glory of Watergate Cake, we imbued our St. Patrick's Day dessert with the spirit of President Nixon (of Irish descent on both sides of his family) and created "Tricky Dick's Irish Trifle."


Seriously, one taste of Tricky Dick's Irish Trifle and you'll be ready to chase the snakes out of the Emerald Isle, swim in a green river, exchange strands of plastic beads (since when was SPD reduced to Irish Mardi Gras?), and enjoy all of the other "traditional" activities for which St. Patrick's Day should be celebrated.