I realize that the title of this post is a terribly-insensitive way to begin a discussion of Alzheimer's Disease.  But, as I've mentioned before, I make a conscientious effort to maintain a tone of silliness above all else on this blog.  After rummaging through a box of family photos and finding this picture of a three-year-old Mr. Tiny (give or take) and his grandfather, I determined that the subject had to be broached somehow.  In my family, we definitely deal in laughter; very little is sacred, even when it comes to a devastating illness.  Plus, the marbles will become a salient point in very short order.

Beyond the horror that all good looks can obviously be bred out of a family in just two generations, I was struck at how vital my grandpa was in this photo - tanned, toned, well-coiffed.  The son of Yugoslavian immigrants, who arrived in the US as indentured servants, my grandpa was raised in Canton, OH.  His mother died when he was a toddler leaving his eldest sister to raise the rest of the children.  Married to his childhood sweetheart for 47 years, he was the generous father of three loving sons and the doting grandfather to seven grandchildren.  In the days of the "Company Man," my grandfather was loyal to the United Parcel Service and retired after decades of much-commended service.  He was an impeccably-sharp dresser and had style to spare; ladies on his route referred to him as the "Silver Fox."  He loved spending time with my siblings and me and always found ways to treat us.  I never attended a school where a small carton of milk was more than fifty cents but he would often stop by our house in his big, brown, UPS truck to palm me a five dollar bill for "milk money."

When I was still quite young, his memory began playing tricks on him and his behavior became increasingly unpredictable.  Eventually, he was diagnosed with Alzheimer's Disease.  The last few years of his life were pretty difficult, but the legacy he left of hard work, dedication, generosity, love, and a wicked sense of humor, allowed my grandmother, my dad, his brothers, and our entire family to manage our grief.  He passed when I was fifteen years old and lo, these many years later, we continue to discuss him daily.

Out from the same box which I plucked the photo, I discovered a Ziploc baggie labeled "Dad's marble championship 1st Place award when he was 11 years old."  I knew my grandfather was an Ohio State Marble Champion but I had never seen an actual medal. 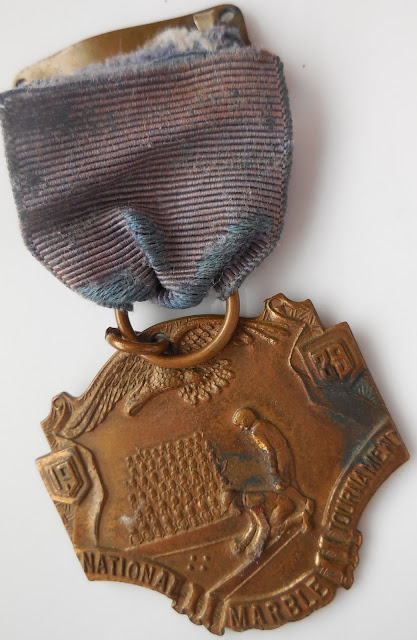 I was thrilled to see the blue ribbon holding the cast-metal medal.  I was touched because the note on the bag was written in my own father's hand (he is a poet of the highest order who doesn't have the option to write anymore).  Inspired by my father and his father before him, I decided to reflect on the legacy created by these two men.  I know it is silly and self-indulgent to write a poem but I am a silly, self-indulgent type, so I wrote a poem.  After all, what's more wacky tacky than a poem about a Depression-era, marble champion from Ohio?

In his twelfth year, he was a champ
And won the yearned for prize.
To neighbors, family, schoolyard chums,
A hero in their eyes.

Before the day of tournament
few folks knew his name,
But reputation preceded him -
Marbles was his game.

With one swift flick of steadied thumb
He let the aggie roll.
From all awaiting victors,
Indeed, the spoils he stole.

Right there upon his puff-ed chest
they pinned the ribbon blue.
No baseball star nor boxing great
Such royal treatment knew.

The medal was a source of pride;
He had the chance to crow it.
But knowing what goeth before the fall,
Of course, he'd never show it.

And so through life he wore the badge
If not in act, then spirit.
He still knew the loud "Hurrahs!"
Even if others couldn't hear it.

Wedding bells and three young boys
muffled childhood bliss.
The marbles found a dusty shelf
On which to reminisce.

Still, the medal's grandeur shone
throughout all his born days.
A gentle calm and dignity
characterized his humble ways.

But life is fickle, that's well known,
Not always a game-winning roll.
Still young by any measure,
Age and illness took their toll

Forgetting now the names of friends,
And times, and dates, and places,
He'd never forget the reverent look
Upon his children's faces.

They knew the man who was inside.
They saw through present foibles.
They knew the joy of that Spring day,
Before he lost his marbles.

I treasure the jar of marbles that belonged to my award-winning grandpa (in storage, otherwise they'd be shown here).  I am honored to hold the ribbon that I know was more to him than a just a prize for playing marbles; it was validation given to young boy of modest heritage that life is good.  That little medal set the trajectory for a successful life full of victories - perhaps none so great as Ohio State Marble Champion of 1939! 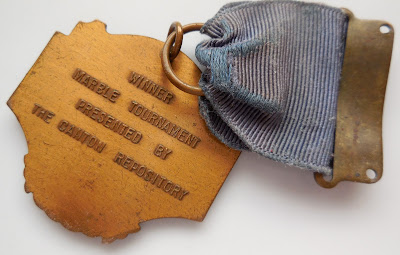 Alzheimer's is one of many terrible diseases for which I hope a cure will be found - not only because of the genetic implications (it runs on both sides of our family).  For more information on prevention and care, please visit alz.org.

"Marian the Librarian" from The Music Man
Because he talks about marbles and this was
a favorite of both my dad and grandpa.

Do you have a family heirloom that inspires you?  One that tells the wacky tacky chapter of your own family's history?  Let us know!