Much like my life in general, my collecting is unfocused and totally lacking in direction.  Unfortunately, I am unable to limit myself to any specific time period, product or manufacturer.  In essence, I am a hoarder - the modern incarnation of Red Foxx as Fred Sanford  - dealing in junk but also wallowing in it.  The real trouble is that I am surrounded by enablers.  For example, the kid sis was driving around looking at garage sales one day and, stopping at a promising home, she found two issues of Children's Activities Magazine. With a sure understanding of the breadth of my aptitude, the depth of my skill level and the limits of my attention span, she bought them for me. 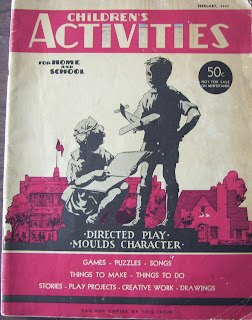 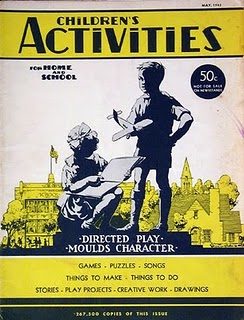 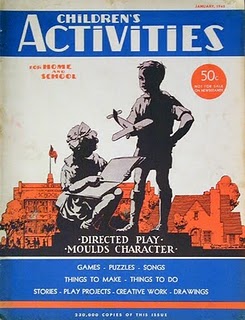 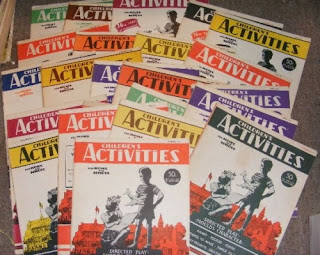 A collection of Children's Activities that is
currently available for purchase on eBay.

I was thrilled upon flipping through the well-preserved pages of my copies of the May 1940 and October 1943 Children's Activities to see that nary a puzzle was completed nor paper doll cut from either issue.  Fatefully, I thumbed a bit further and stumbled across the coloring pages.  To my horror, I found a reckless disregard for coloring inside the lines and a total lack of propriety when it came to realistic representations of colors as they exist in nature.  Furthermore the directions said, "Little Brown Bear is wearing his new orange blouse and blue tie."  Why then would this little miscreant give the Little Orange Bear a green blouse and a red tie?  I paused, recognizing that these pages were more than likely colored in the throes of WWII, and gave the kid a break.  Moreover, I realized what a treasure it was to have these colored pages.  In my eyes they enhance the value of the magazine and document the history of the original owner, namely Darrel McCurdy of Wichita, Kansas.  Every now and again I will return to the pages of Children's Activities and find a real brain teaser -  I still haven't found the train hidden somewhere in the picture of grandma's attic.  On a recent visit to the magazine, however, I found a project complete with instructions on how to create a marionette out of peanuts.  If that isn't fodder for wacky tacky-ana, then I don't know what is!! 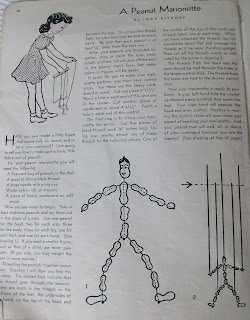 I embark on the journey of projects like this with one thought in mind - they were designed for a small child to accomplish.  Surely I, a grown man, could make quick work of this marionette.  I knew I would be performing apres-dinner spectacles the likes of which the Von Trapp children could not even dream!  As it turns out, my crafting skills are marginal at best and the peanut marionettes were a challenge. 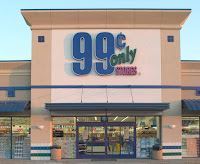 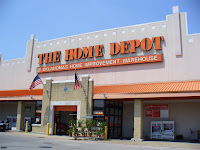 Really, who would think that finding peanuts in the shell would be one of the most difficult parts of this endeavor?  Thankfully, the 99cents store came to the rescue!  For the handles we used paint stirrers - free at The Home Depot.  In the end, this was our least expensive wacky tacky project - if one assigns absolutely no value to time!


Four hours later, the "marionuts" were ready for prime time! 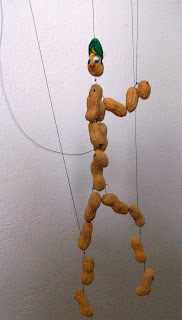 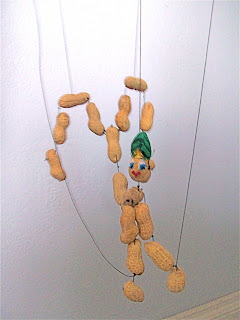 Mary gave her marionut a snappy turban and named her An-nut Funicello. 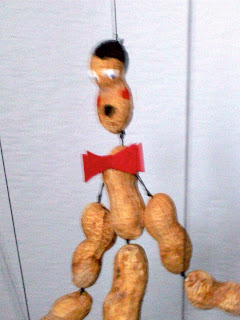 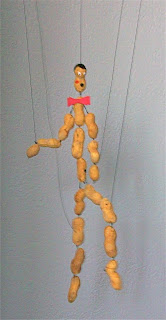 Ever the rule follower, I adhered rather closely to the illustration in the
magazine, only straying far enough to add a jaunty bow tie to Tony Ben-nut.
A special prize awaits you at 3:44

I'm not quite sure that we are of the same caliber as Mr. Bob Baker and his theatrical troupe of marionettes, but I do offer a warning to the Von Trapp children - überwachen Sie Ihre Rückseiten!!!  (literal translation of "Watch your backs, suckas!!!" - according to the translator on my computer) 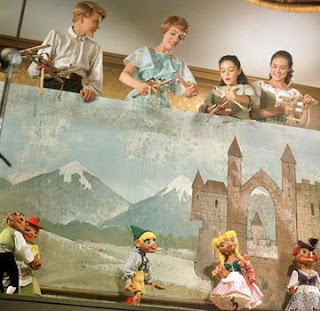 Yeah, I'm talking to you!

**SAD UPDATE: The YouTube Gestapo took away the cleverly-edited soundtrack to our puppet video citing potential copyright infringement.  No matter how often we argue the "fair use" card of such songs as "I've Got No Strings," "I'll String Along with You," and "Funeral March of a Marionette" (a song probably in the public domain), they say no dice.  One of these days we'll get around to re-scoring our Mario-nut Masterpiece.
Posted by Mr. Tiny at 8:48 PM