Crazy Crafty: Putting All My Eggs in One BAG-sket!

I've never been a huge fan of the word "craft."  In the world of "arts & crafts," it is somehow implied that of the two, crafting is the lesser form.  What real skill set is needed to perform any given craft?  A craft is something that we set in front of the elderly and the feeble-minded just to occupy their time.  A paper plate mask is a craft.  A lunch bag hand puppet is a craft.  Peanut marionettes are a craft for heaven's sake!!  I wonder, would Monet look at my glitter-covered gnomes and flamingos and see them as art or would he deride them as mere crafting?  Crafting really is the red-headed step child of the art and design world.  Perhaps I should think of crafting in a different way.  Perhaps I should embrace the word.  After all, I am no high-brow artiste.  I employ everyday objects and the minimal skills I have to make what can most easily be understood as crafts.  I know that many crafters love the word.  In fact, the idea of me besmirching the honorable name of "crafting" is enough to have scrapbookers everywhere calling for tar and feathers.  Nevertheless, I suppose that - in my own way - I craft.

The lightening bolt of craft inspiration can strike at any time.  One day while perusing the local flea market/junk swap, we found a purse.  No ordinary purse, this wacky tacky number was made of a painted basket, burlap, plastic handles and was decorated with flocked foliage.  Mary was absolutely thrilled because among the things she found inside were vintage lipstick cases (some still filled with what can only be described as fossilized lipstick), hairpins, tissue and various and sundry Avon products.  At three dollars (haggled down from five) the purse was destined to be hers.  Upon further inspection, we noticed a label inside that read "Susie Lee Original by East Texas handbag Co." 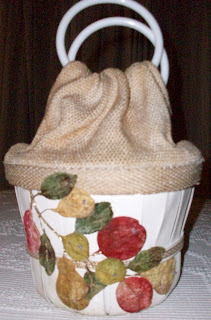 Usually, my laziness gets the better of my desire to research, but when we got home, we immediately began our internet search for the East Texas Handbag Company.  The very little that we were able to learn about Miss Susie Lee and The East texas Handbag Co. came from the blog The Thrift Store Divas.  According to the divas, East Texas is prime peach country and bushel baskets were used to harvest the ripe fruit and take it to market.  Essentially, the retired peach-picking baskets were "upcycled" (to use a very trendy crafting term) and turned into fun and folky purses. 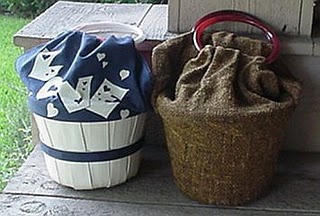 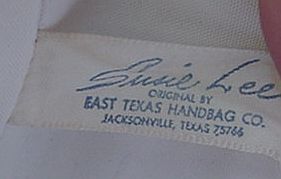 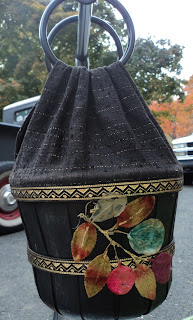 Another example of the handbags
This one is available for purchase at
graceblackvintage.etsy.com

Apparently, the production of East Texas Handbags was halted in the 1970's and the rest is left to memory and the surviving handbags.  Without delay, I began to think how I could pick up where Susie Lee left off.  "You can easily find baskets," I said to myself.  "Remember the two yards of vintage burlap you have," I continued, " and believe it or not, you have a huge stash of handles, trims, flowers and lining fabrics."  I was about to launch into a detailed monologue about amazing ideas for all the many purses I was going to make when I stopped and said, "You really need to make some friends so you don't have to talk to yourself so much." 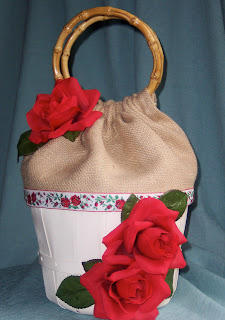 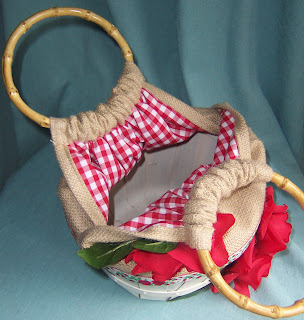 A cheery lining of red and white gingham

Yeah, they're kind of corny and according to our research, their heyday was the 1960's, but I think think that they have a naive, folky quality about them that hearkens back to an even earlier era.  Couldn't you just see Jeanne Crain carrying one in State Fair? 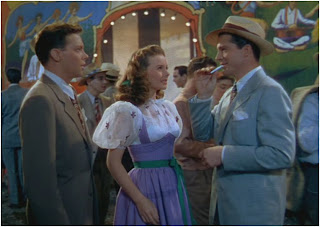 Dick Haymes, Jeanne Crain and Dana Andrews in State Fair, 1945
Jeanne's clothes in this movie are pretty much the inspiration for everything I make!!! 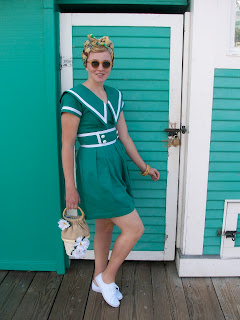 Because the basket purses are a novelty, thy truly lend themselves to all kinds of cornball themes.


I admit, these are far from high art.  They're probably even a little too lame to be considered folk art. At best, they reside comfortably in the world of wacky tacky!