When roadside architectural interest is combined with habitable living quarters, a wacky tacky angel gets its wings.  In Encinitas, CA the world-famous boat houses have been maintaining their steady course for over 80 years! 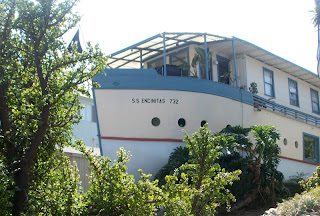 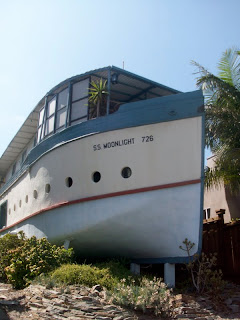 In 1928, Miles Miner Kellogg, using building materials reclaimed from a defunct dancehall, built the S.S. Encinitas and the S.S. Moonlight.  Obviously inspired by ocean travel, Kellogg's twin boat houses are permanently docked on 3rd St. in old Encinitas.  Despite appearances to the contrary, the boat houses were never seaworthy crafts, they were only ever intended as residential properties.


The boat houses cut a striking figure on a street dominated by traditional dwellings.  The structures are  painted in a nautical color scheme of red, white and blue and come complete with decks and portholes.  Upon their purchase in 2009, the boat houses were open for public tours; they are now rental properties.

Imagine how much stress would have been relieved from Cary Grant if only he and Sophia had opted for a boat house instead of a houseboat!

While the boat houses are not tugboats, we couldn't help but think of one of our favorite cartoons - "Little Toot" from Disney's Melody Time (1948).