Before I talk about our Halloween, or the costumes I made, or the fun that we had, I have to do a little bit of bragging about how disturbingly cute my nephew is!  Can he really be related to me?  I question his genetic make-up because nobody, but nobody, has ever accused me of being cute and then this guy comes along and ZOWEE - off the cuteness charts!!!  That's not an exaggeration; we took him to the doctor and found out that he was in the 99th percentile for height in 2 year olds but they said his cuteness is unquantifiable.  They actually referred my sister and brother-in-law to a crisis counselor because they said he was at dangerous risk levels for developing an "acute cuteness complex" at any moment.  If I was super hip, I would "hash tag" this - #cutepeopleproblems.  I, as you are undoubtedly well aware, am woefully, tragically, painfully unhip.

Now back to our regularly scheduled programming (but really cute though, right?)

Particular attention has been paid to Dennison's Bogie Book this Halloween season.  I guess we bloggers are following the same spiritual vibrations because the costumes I made this year are directly inspired by the beautiful, deco-era illustrations found within those books.

I've always found the Halloween costumes of the 1920's and 30's to be exciting.  Instead of blood and gore, the costumes make it seem like every Halloween is a Cole Porter musical.  It's not only the costumes, but the decorations, the games, and even the ephemera. Papier-mache pumpkins, die-cut witches, lanterns, funny hats, cider, anything spooky from as early as the Victorian era through the 1930's - that's what Halloween means to me.  Blessedly, our friends, Kevin & Jody, feel the same. 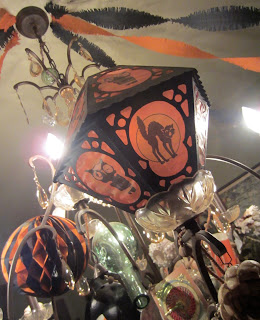 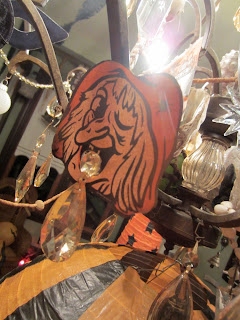 The Edward Gorey opening theme from
the PBS series "Mystery" (a parental favorite)
See the bat lady at 0:21-0:25

My costume was a little less macabre than Mary's, but it wasn't all comic (see the tear drop on my mask?).  Speaking of the mask, I just realized that I'm always wearing some kind of face furniture.  Because I don't wear contacts, I just went blind all night.  I have particularly horrible night vision so I spent the entire evening squinting and tripping because my depth perception was off - the ideal party guest.  I'm going to have to include the necessity of glasses to my personal list of hard and fast costume rules - no face paint (messy, greasy, and easily smeared) and nothing more restrictive or less comfortable than pajamas.  If you look at the old-timey ilustrations, with the exception of the giant spiderweb, all the costumes look extremely wearable.  Let it be known that I love all those clever costumes thoughtfully created with moving parts, giant masks, added appendages, etc.  For me, however, comfort and the ability to sit, stand, and move is paramount.


I've already bragged about my nephew so I don't want to boast even further, but with the exception of missing a few parties that I know were awesome, this was a pretty perfect Halloween.  It was the ultimate haunted house experience!

I hope you groovy boos and ghouls had an awesome Halloween too.  Honestly, we spent half of our night planning and preparing for next year's festivities.  When I was young I liked Halloween, but the older I get, the more I LOVE Halloween!   Thanksgiving, Christmas - those are a lot of work; Halloween is pure fun - just a little responsibility and a whole lot of candy!!!