Waking the Dead: Hollywood is Forever

I must admit that I am a sucker for a good celebrity sighting.  The older I get, the less I am struck by the stardom and the more I am struck by the value that our society (myself included) places on celebrity.  As much as certain magazines want to make us believe that they are "just like us," the truth is that celebrities are so very different.  Ask yourself, "When was the last time I worked for a couple months and got paid more money than most people will see over the course of their entire life?"  Ask yourself, "If I got busted for drugs, multiple hit-and-run accidents, and theft, would I still be free to drive my new Porsche?"  Ask yourself, "Will Promises have my regular room available?"  Then ask yourself, "Why do I still love celebrities so much?"  It is a cultural phenomenon which I refuse to battle.

Yes, celebrities are very different from the average Joe in most ways but one; eventually we ALL kick the proverbial bucket.  On one of our patented, absolutely directionless adventure days we headed to Los Angeles and encountered both celebrity and death!

Sometimes it seems that the well of excitement around town has run dry; it is at that moment that I break out my trusty list of things that I still haven't seen (or covered here on wacky tacky) and we begin the hunt.  This time we tracked down one of the most infamous addresses in LA - The Los Feliz Murder House.  One Christmas Eve more than 50 years ago, a wealthy doctor, seemingly unprovoked, violently bludgeoned his wife to death before attacking one of his children and eventually killing himself.  As the story goes, the house has remained untouched for lo these many years and the creepy crime scene is still decorated for Christmas!  Every online reference to this property tells a version of the same story, but nobody backs it up with pictorial proof.  Sadly, we will be no exception to the rule; as soon as we got out of the car, a neighbor came out of her house and threatened to call the cops if we trespassed.  Given the house's history, it seems like there are far worse outcomes to exploring its grounds than getting into a hassle with Edison Security guards or the LAPD, but I was really not interested in pushing the limits of the wacky wagon as a getaway car, so we snapped a few photos of the house and hit the road.

With mortality on our mind, we made a short jaunt over to one of Hollywood's most famous resting places, Hollywood Forever Cemetery. 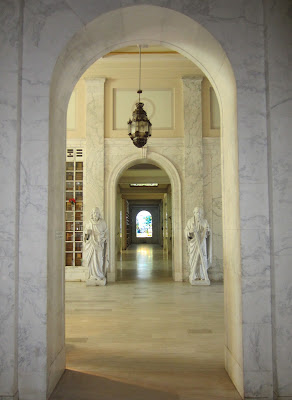 Hollywood Forever Cemetery is tucked away off of Santa Monica Blvd. - a quiet respite from the city noise in the shadow of Paramount Studios.  There are many celebrities there, but we ran out of time and steam to track down every last one of them; here are just a few of our favorites. 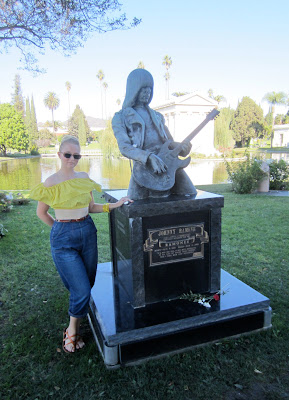 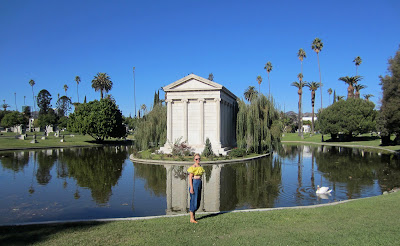 
Movie stars of every kind are buried here, even non-human celebs like Toto! 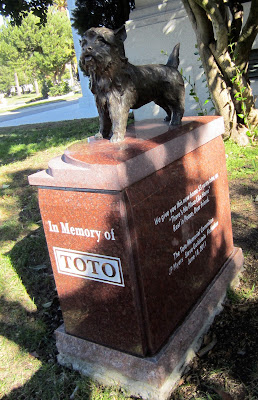 Some of the the most celebrated stars are resting inside the Cathedral Mausoleum. 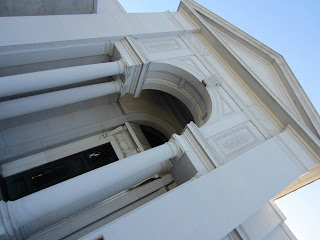 "I Dood It" - Eleanor Powell
This is one of the finest feats of terpsichore that I have ever seen!!! 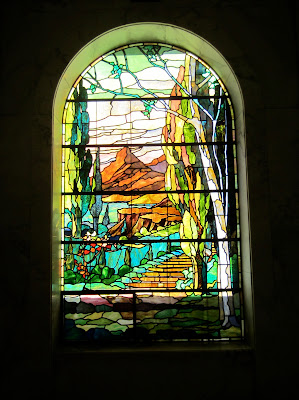 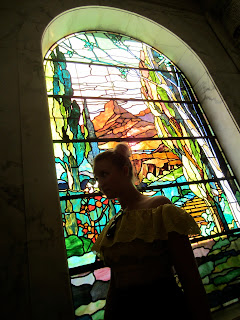 
Other notables include: Clifton Webb, Janet Gaynor, Nelson Eddy, Charlie Chaplin, Jr., Darla and Alfalfa (of Little Rascals fame), Mel Blanc, Norma Talmadge, and even though he doesn't appear on the star maps, David White (Darren's boss, Larry Tate, on Bewitched), is there too! 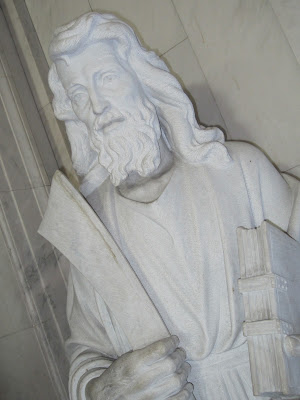 Hollywood Forever Cemetery is sort of a "must see" for lovers of Hollywood and "Hollyweird."  As morbid as it sounds, this is really my kind of celebrity sighting - no awkward silence (plenty of silence, none of it awkward).  As neat as Hollywood Forever is, I must say that I almost prefer the cemeteries of "regular" people; there I can invent my own backstory about their lives, loves, and losses.  Although they have long since passed on to their great reward, I can't help but get a bit of a thrill seeing the final resting places of so much Hollywood royalty. 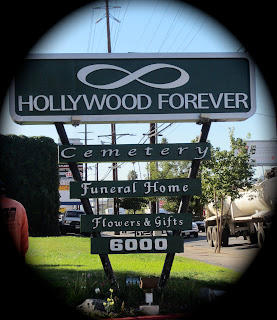