Do you remember your first day of junior high school - not knowing where to go or where to sit, hoping you had the correct supplies, looking around for someone to show you the ropes, smelling the acrid stench of mystery body odors, stale cigarette smoke, and denture adhesive?  Oh...perhaps I am confusing junior high with Bingo Night at the local Elks Lodge.

Driving by the Elks Lodge on a regular basis as part of my thrifting rounds and seeing the sign advertising the weekly Bingo game, I always thought to myself, "We've got to get to Bingo Night tout suite!" Well, several months and several drive-bys later, we finally made it to Bingo.  If you're as unfamiliar with professional Bingo as I was, the realities of an evening spent playing are rather accurately summed up in this episode of Roseanne (not much of an exaggeration and a bonus for featuring Edie McClurg).

As a Bingo beginner, I wasn't sure what to expect at Bingo Night but I was secretly hoping it would be exactly like Roseanne.  Fortunately, Bingo Night delivered fully on the promised the sit-com's portrayal of grandmotherly types taking rather seriously this game of chance.

Although it's a popular method of making something old and seemingly-boring sound exciting, the phrase "This isn't your grandmother's Bingo" could not be further from the truth.  Indeed, Bingo Night at the Elks Lodge is very much your Nana's Bingo; what it isn't is your Bingo.  This is not the childhood game with a single five-by-five, square card and a bunch of coins, beans, or buttons.  What Bingo Night is is a three-hour exploration into the human desire to exploit the mystery of luck.  Rows and rows of fortune hunters hold court with their lucky cats, troll dolls, photos of dead relatives, $90-120 worth of bingo sheets, and of course, their color-coordinated bingo markers (some with ergonomic grips)!  This Bingo had a computerized Bingo King machine.  This Bingo had fast-paced, high-stakes rounds of play.  This Bingo had light boards, and sound equipment, and multiple video monitors.  This Bingo was going to leave us in its dust if we didn't catch up! 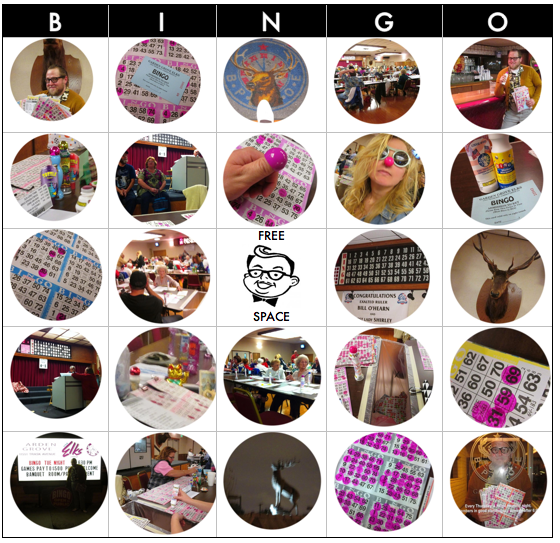 As soon as we entered the hall, we were marked as beginners - we came prepared with neither Bingo talismans nor markers, we had bingo game sheets that had to be replaced twice because we immediately messed them up, and we wore facial expressions reserved for the recently lobotomized.  Arriving just a few minutes late for the earlybird game, we had to find seats at the very front of the hall.  As we wound our way to the last remaining tabletop not already plastered with Bingo sheets and assorted Bingo paraphernalia, I sensed that my novice's confusion was directly related to the confusion of seasoned onlookers; only then did I remember that my Bingo-night attire suggested that I was an old pro.

Fortunately, we were taken under the wing of a surprisingly-young and helpful woman who told us that she makes the Bingo scene every week.  She did her best to explain the basics but it was clear that our propensity toward uncomfortable giggling combined with our endless questioning was not going to make us favorites among our tablemates.  Frankly, I believe there was a prevailing and very-genuine concern that our lack-of-beginner's luck was going to rub off.  Seeing that we were still unable to fully decipher the details on the program outline, we even got a couple pointers from the Bingo caller himself!

As with any subculture, there is a certain amount of associated jargon - "Bingo Lingo" if you will (or even if you won't) - that must be learned if one wants to thrive in the Bingo world (see: "Lightning Dog," "Crazy Kite," "Money Train").  But Bingo, which incidentally is the most mundane form of gambling (beating out Rock, Paper, Scissors and a coin toss by a wide margin), extends far beyond a game; Bingo people are a race unto themselves, complete with their own stereotypes.  There is the elderly man who keeps shouting "Bingo" even though he is nowhere near a win; we'll call him Paul...because that was his name.  There is the ancient lady who makes everyone aware that she has outlived every single one of her teeth by abstaining from dentures and constantly exercising the agility of her tongue.  There is the hardcore Bingo addict who arrives early to stake out prime real estate and spends an inordinate amount of time arranging his markers, charms, and homemade blackout chips.  There is even the disgruntled woman of an age made indeterminate by extreme living whose chronic, hacking cough is interrupted only long enough to voice aloud her complaints about "newbies," cheaters, and less-than-adequate Bingo callers.


Friends have asked if we won and all I can say is that the evening transcended financial gain - which I guess translates to "no."  While our Bingo Night might have exclusively been an emotional win, we definitely came away feeling like champions...at least in the dental department (which is actually saying quite a lot).

Oh, "B-4" I forget, I wanted to know, do you Bingo?  Is your local Bingo Parlor as technologically advanced as the Elks Lodge?  Have you ever had a big Bingo payday?  When was the last time you screamed out "BINGO" in a public forum?  If it has been a while, I say get thee to a Bingo Hall!