"Hiya!  Thanks for stopping."

Several years ago, I was sent on a work trip to Chicago.  As a diehard fan of Ferris Bueller's Day Off, I could have spent my first time in the "Windy City" recreating his infamous ditch day - the Willis (née Sears) Tower, the German-American Steuben Parade, the Cubs game - but eating pancreas at a snooty (snotty?) French restaurant was simply not in the cards.  Instead, I dragged my coworkers along on an epic journey (a train and two busses) to consume organ meats of a more mysterious variety in an atmosphere more peculiarly American.


Luckily, my pals were good natured and up for a bit of old-timey adventure.  Nevertheless, I did get the feeling that they were stunned by the fervor with which I made the pilgrimage to my hot dog holy land, Superdawg Drive-In.  I couldn't help but notice their stares as I consumed the titular foodstuffs with unprecedented gusto.  And there was no denying the borderline contempt I felt from them when I spent upwards of $80 on Superdawg souvenirs.


I think I was so busy scarfing hot dogs and stocking up on t-shirts, keychains, and plush hot dogs that I managed to capture but a single photo from the trip.


Typically, one photograph does not a blog post make.  So, when my brother and sister-in-law announced a summer trip to the Midwest, including a stop at the original Superdawg location, I told them that they had to dedicate a dawg to me (and take a lot of pictures). 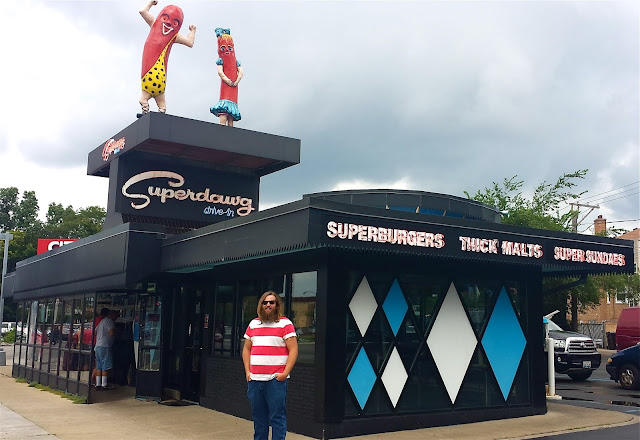 We were first made aware of Superdawg Drive-In by one of the most brilliant documentaries ever made, A Hot Dog Program.  Raised on PBS, my younger brother and I would watch and watch and watch again Rick Sebak's magnum opus; every time it appeared on one of the local stations, we vowed to visit each one of the historic hot-dog emporiums before we died (likely of hot dog overdose/coronary disease).


Initially, Superdawg's rather severe facade can be slightly off-putting.  When I think of a friendly, '40s-era, neighborhood hot dog stand, rarely do I picture a stark, black box.  While Superdawg has always been family-owned, it has definitely endured its fair share of "updates" over the decades (dining room addition, awnings for the drive-in, etc.).  One need only look to the rooftop statues, however, to recognize Superdawg's enduring legacy of wacky tacky.


Undeterred, even after getting grief from locals about it being a corny place for tourists only, my brother and sister-in-law made the trek to Superdawg Drive-In.  True to their word, they not only took a lot of photos, they also ordered a lot of food.  I'm pretty sure they got one of everything on the menu.


Make no mistake, the proprietary hot dog recipe makes the dawgs at Superdawg incredible!  Although, what keeps me wanting more is the packaging.  Every cup, every box, every bag is adorned with charming sayings alongside amazing illustrations of Maurie & Flaurie.

Sometimes, the best thing to do as a tourist is to visit the touristy places; I couldn't forgive myself if I went all the way to Barcelona without visiting La Sagrada Familia.  And touristy or not, hunger be not proud.  If the nearly-seventy-year-old Superdawg Drive-In was the city's only representation of the way Chicagoland does hot dogs, then I am ready to declare Superdawg as the real "Sausage King of Chicago!"  They get every "dawggone" detail right, right down to the style in which they serve their legions of loyal patrons.

"I'm doing my darnd'est to serve every item, every time, to every customer, in a manner to make you want to return...and bring your friends with you."  If that is Superdawg's mission statement, then it is working.  As if I wasn't already in a constant state of desperation for a Superdawg myself, I am always thrilled to bring my friends with me by ringing the "Chow Time" bell for the best hot dogs in town! 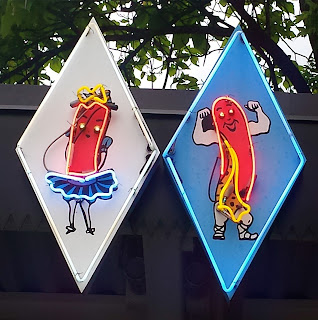