Continued from "The Mysterious Chinese Castle of Jacumba: Episode I"...

Motoring down the old highway into Jacumba, Mary instructed me to close my eyes; with a vague memory of the Chinese Castle's location, it was her idea to helm the wheel so I could be surprised.  Clutching the disk loaded with our family history and riding the imaginary brake, the real surprise for me was going to be if we made it out alive...and if the castle was still a castle.  As we came to the crest of a hill, she instructed me to open my eyes; what a pleasant surprise to see that not only was the castle still standing, it was looking rather glorious.  Perched above the town, the Chinese Castle is difficult to miss, not leastwise because of its fresh coat of blood-red paint.  With a firm belief that no one could deny our history-packed ambush, we drove confidently up to the castle gates.  Unfortunately, the gates were securely locked.

With no one in sight and no gong to bong, we decided our best bet was faith in small-town stereotypes; Jacumba exudes that everybody-knows-everybody atmosphere.  Striking out with the first few folks with whom we inquired, we knew we were on the right track when we found our Jacumba heroes, Bill & Richard.

Longtime residents of the area, Bill & Richard are semi-retired pals and Jacumba's unofficial goodwill ambassadors.  It didn't take more than their friendly wave as they made their regular rounds to get us to stalk them down (it's nice to make new best friends considering we were so new in town).  After telling them our story, they not only gave us the name and phone number of the new Empress of the Chinese Castle, they lent us their cell phones when we realized that we didn't have cell service in the area.  Leaving a detailed message when we couldn't get through, Mary and I accepted the guys' offer to show us the renovated hot springs and the community center (both offering plenty of historical insight).  As we chatted, we learned that Richard was very familiar with the castle, having updated much of the plumbing.  Touring the community center, Richard's phone rang; we were ecstatic to hear that Cherry, the castle's owner, was finishing up a meeting and was happily driving the thirty miles from her home to meet us at the castle for a private tour!!!  Cherry, an historian and writer, does not live in Jacumba; she bought the Chinese Castle for the love of history and the masochistic delight of a back-breaking restoration. 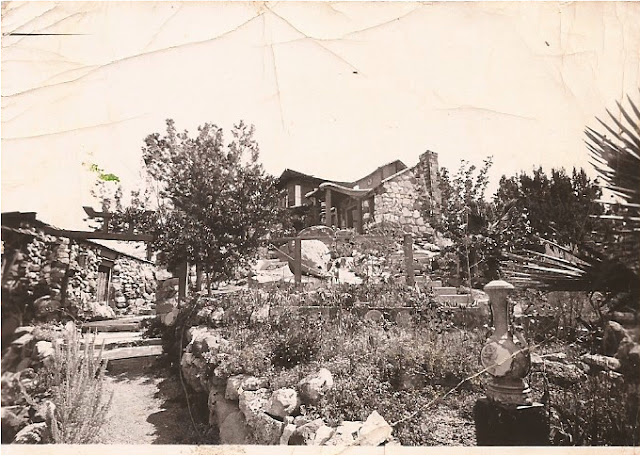 Meeting us at the gate, Cherry was prepared with more information about our ancestors than we were.  With about an hour to spare, she started right in on the tour, complete with historical facts and figures.  Corroborating Velma's essay, Cherry explained that the house was built sometime in the '20s by a man named Frank Battles.  It was said that he had a wife of Chinese descent but there is no documentation and no photographs of the original owners.  Changing hands many times throughout its history, the castle came with the innovative handiwork and collected furnishings of every new owner; because of its distinctive design, it also came with decades of myths and legend, including secret tunnels, illegal gambling, and even murder.  Anxious to uncover the real story, we were itching to get inside.

With its hip-and-gable roofline supported by scrolling beams, the main house consists of two asian-inspired buildings connected by a central breezeway.  Ancillary outbuildings include the garage, a guest cottage, a chapel, and an outhouse.  While the house (stripped bare and in pitiful shape when acquired by Cherry) is still very much in the middle of renovations, we invite you to come along on the wacky tacky tour of the Chinese Castle - before and after! 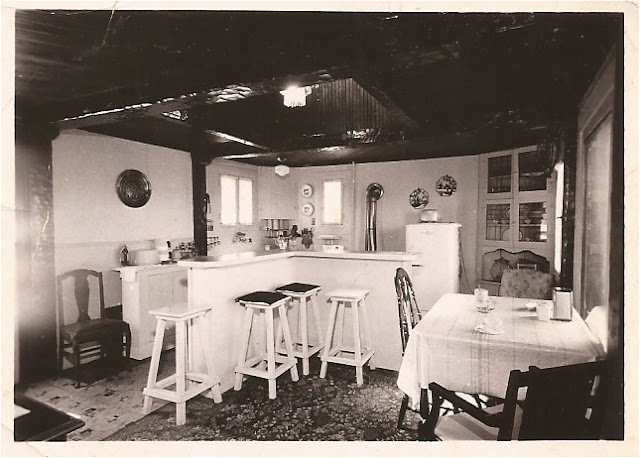 Quite ingeniously, the kitchen is housed in a separate building.  Cooking on an early-20th Century stove in the middle of the desert would have been an uncomfortable affair, particularly in the hottest months.  Consequently, the Chinese Castle has a year-round summer kitchen with a large portion of the ceiling recessed, allowing the heat to rise. 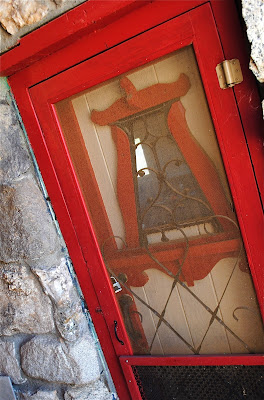 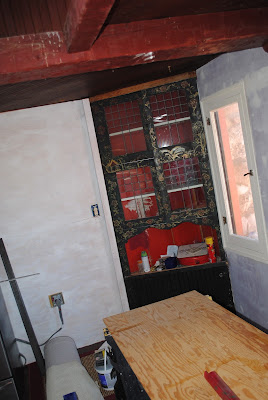 The kitchen door and the original corner cabinet (given a gorgeous
makeover with a chinoiserie motif) are unbelievably cool.


The first of the myths surrounding the Chinese Castle originates in the kitchen.  Blended into the kitchen's floorboards is a trapdoor, rumored to be the hatch to a secret tunnel that crossed beneath the California-Mexico border to transport illicit goods and undocumented Chinese laborers.

Before its most-recent purchase, the castle was so badly ransacked that essentially no traces of the home's collections or fixtures remained; even the staircase to the second story had been completely demolished.  In a way, it left a blank slate for Cherry and her husband to re-imagine and put their own stamp on the Chinese Castle.


The photo album did not yield any "before" pictures of the bathroom but Velma's write-up described it thusly: "The bathroom wall of selected curiously formed rocks has more than thirty faces of men and animals to contemplate."


Foolishly, I got distracted and failed to take pictures of the upstairs (two smallish, square rooms).  It was probably because the main bedroom opens onto a spacious rooftop deck and a sweeping vista of the town below.

To our wacky tacky eyes, the most amazing sight in the Chinese Castle is the INDOOR POOL!

Bobcat Manor, so named for the two families of bobcats that were found living on the property, is one of the guest cottages referred to in the very first photo of the castle I found.  It was built in the 1940s out of local stone and railroad ties and is also getting the full-treatment makeover.


Viewed from the sun-protection of the garage's covered carport, the chapel was once a two-room guesthouse.  As the second room was little more than a dilapidated lean-to, it was removed as a safety precaution before the decorative stonework was applied. 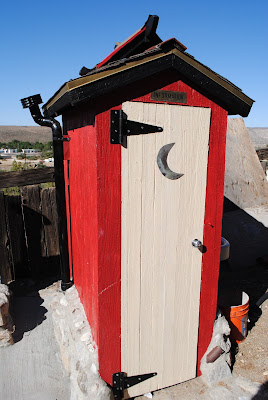 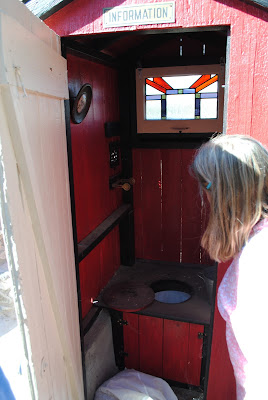 The fully-plumbed outhouse was original to the 1920s structure; technically, it
has received a make-under, being transformed into a proper, old-timey
outhouse, replete with more of Cherry's stained-glass handiwork.

Not only were the gates replaced, but probably a mile-worth of concrete trails as well.  One of the best aspects of the castle is that there are so many places to go; the many meandering trails lead to secret niches, granite gardens, and wildlife hideouts. 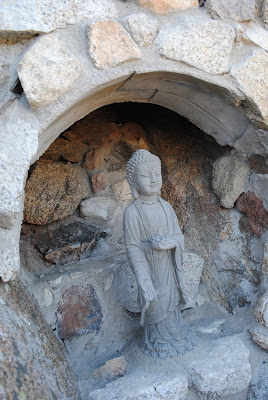 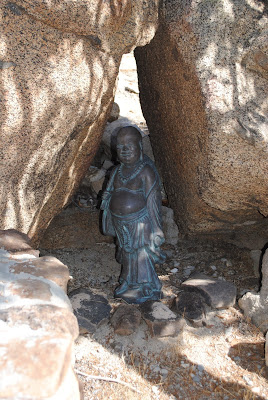 Whether manmade or naturally occurring, every little nook and cranny is a thematic still life.
Built into, around, and under the boulders are many more storage spaces, niches, and hiding places.
What I wouldn't give for a death-defying game of hide-and-go-seek at the Chinese Castle!

The final mystery of the Chinese Castle was answered by the iconic stripes of the chimney.


Visiting the mysterious Chinese Castle of Jacumba was a thrilling opportunity.  Not only because we got to play Nancy Drew/The Hardy Boys for a day, but also because we, descendants of the former emperor and empress, came out of it learning that we are pretty much Chinese royalty.  Now all we have to do is write a letter to Xi Jinping and see what he intends to do about it.

It seems odd somehow to feel so connected to a house I had never before visited, owned by relatives whose acquaintance was peripheral at best.  Nevertheless, I am so grateful for all of the renovation, restoration, and conservation that Cherry and and her husband are doing for the Chinese Castle.  What was but a footnote in my family history, has quickly become a major point of genealogical pride.  It is perhaps a tad premature for me to feel a sense of ownership, but wouldn't it be amazing one day to find a way to reclaim the throne?!!  Hopefully, when Cherry is ready to sell, Mr. Tiny will be financially responsible enough to buy!  What a joy it would be to wake up in the Far East and still be way out West!