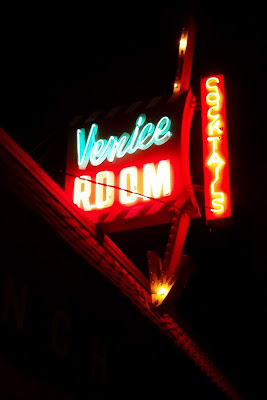 At Monterey Park's Venice Room, it's strictly a case of "GYOS" (Grill Your Own Steak) - a novelty to which I would normally find myself entirely averse.  I mean, restaurant fondue is a definite fon-don't for me as I am morally opposed to paying for the privilege of preparing my own meal.  The charm also wears quite thin with things like shabu-shabu.  And the same holds true for pho; if I wanted to make soup, I would have simply stayed home and made soup!  While this has certainly prevented many a succulent encounter with Korean barbecue, I've learned that if you don't stand for something, then you'll fall for anything.  Principles.


Few things have the power to overcome my aversion to DIY dinners on the town like a mid-century steakhouse.  Opened in 1957, Venice Room is the true definition of a bar & grill.  In every sense, it is both a bar (about two-thirds of the facility is dedicated thusly) and a grill (literally, one communal grill in the corner that serves as the stage for steer-searing showmen of every variety).


The dinner menu is limited at Venice Room.  So limited, in fact, that there is no menu at all.  As soon as our group of three was seated in one of the tufted, black-leather demilune booths, the lone waitress approached the table and, extending three fingers on her right hand, queried, "So...three steaks?"

Sensing my hesitation, she quickly explained, "That's all we have - steak, baked potato, salad, and a roll."  My request for a dinner service sans steak was met with equal parts incredulity and pity.

Keeping things ever more simple, only one cut and one size of steak is served at Venice Room.  But don't ask me what cut that is; I can't tell my T-bone from my top sirloin.

The method of food delivery is initially startling but pleasantly old-timey.  Guests are invited to help themselves (do you detect a theme here?) to the salad bar, a cafeteria-style affair complete with sneeze guard.  Moments later a platter arrives tableside that contains a foil-wrapped baked potato, a french roll the size of a football, and great slab of raw beef in wax paper.

The steaks may be the stars of the show at Venice Room but behind every great steak is an even greater grill master.  Standing before a massive indoor barbecue, beneath the gleaming scallop trim of the copper vent hood, Ben cooked every morsel of meat to perfection...at least according to Erika.  But it was Ben's first time.  His performance at the Venice Room grill was nothing compared to "Don Julio." 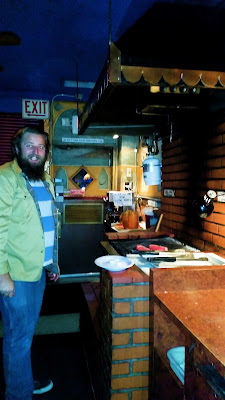 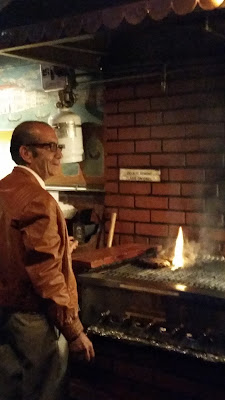 Ben vs. Don Julio
From grill marks to jackets there was one clear winner.

Small but mighty, Don Julio escorted a beautiful bevy of local talent who swooned as he turned the seasoning station into a scene straight out of Cocktail.  Spinning sauce bottles and twirling tongs at the end of his nimble fingers, Don Julio skillfully choreographed the flames in a dramatic fire dance.  An obvious expert, DJ's system even included adding a bit of char to the rolls. 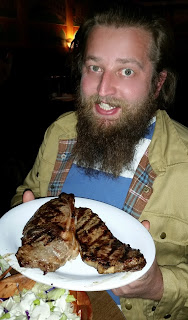 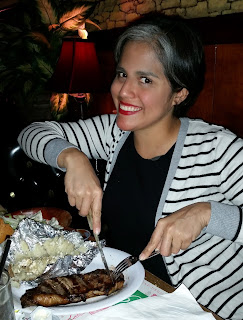 All was well before the meat sweats set in...

We did such a thorough job in cleaning our plates that the owner (son of original owner, Joe Lombardo) came over to our table to congratulate us.  Peppered throughout our polite small talk, we were sure to include compliments on maintaining this landmark restaurant and its many fine furnishings.

As lovely as the murals are and as much truth as there is in the adage, "if it ain't broke, don't fix it," I am always looking at even the finest venues with a critical eye.  For simmering just beneath the jolly surface of this wacky tacky diner is a frustrated restaurateur and production designer wanting to create atmospheric and gastronomic perfection.  I just so happen to have a few ideas handy:

1. This one seems like a gimme but, in a Venetian-themed restaurant clad in canal scenes, it seems to me that the staff should be dressed as gondoliers (singing gondoliers would be a bonus).
2.  The "salad bar" - a term I use as lightly as a downy feather - could use some revamping.  It's a system that would certainly not suffer from the addition of tomatoes or a few shoestring beets.  My feelings would certainly not be hurt if somehow the "bar" took the form of a gondola...or maybe I'm just taking the theme one step too far.
3. This will make me sound gluttonous but nobody ever said, "That's too much butter!" Mathematically speaking, a pre-portioned teaspoon of butter simply isn't enough for a large baked potato and a roll as big as my head (a head that falls in the 99th percentile).

A few quibbles notwithstanding, Venice Room is practical wacky tacky perfection - particularly if you are the type who wants to grill your own steak in front of a live studio audience (I'm looking at you Don Julio).  On this point, I am certainly willing to concede to a landmark with a record of nearly 60 years of successful service.  So make your way for steak your way! 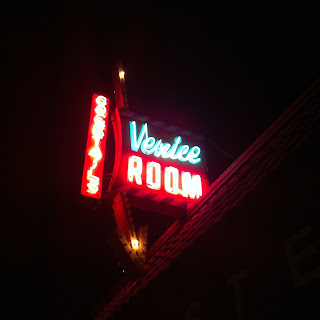