Aren't we the literate ones?  "A wacky tacky book review," you ask, "just who are you trying to kid?"  Inspiration for wacky tacky takes many forms.  Sometimes it even comes from books - forcing us to read and thereby forcing us into the only room in the house where one can read in the luxury of total privacy. 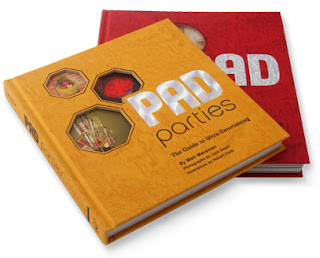 This dynamic duo, Pad: The Guide to Ultra-Living & Pad Parties: The Guide to Ultra-Entertaining, is a compendium of living and partying in an "ultra" fashion.   Ultra, in this case, can be defined as an extreme combination of lounge, exotica, kitsch and an overall sense of bad taste.  Essentially, these are DIY instruction books that include tips, tricks, projects, case studies and even recipes for achieving that sometimes elusive quality for which all the world strives - wacky tacky!  Among our favorite projects were the Illuminated Punch Bowl and the Art Connoiseur Liquor Larder (a homemade shelving unit that works like a medicine cabinet in which the doors are pieces of mid-century art). These books earned our immediate favor by highlighting and recommending the musical stylings of Janet Klein (already mentioned in this blog as our favorite chanteuse) & Her Parlor Boys as the perfect party music.  We were further enchanted by the liberal use of animal prints, bamboo, fur and glitter.  However, all that glitters in these books need not necessarily be considered gold.  While interesting, most of Pad's projects are labor intensive, time consuming and require a skill set beyond the basic operation of a hammer and nail.  They are also expensive!* The case study homes included also veer towards the excessive (even by wacky tacky standards).

Nevertheless, we decided to tackle one of the simpler and more effective projects offered in Pad Parties - the Goldfish Globule Candlelight Lantern.  Second cousin to the hanging, macrame plant holder, we found this idea to be truly inspired.  Having said that, the notes for this particular project warn that the candle burning in the middle of the fish bowl can heat the water to unsafe levels for the fish.  Therefore, we nixed the interior candleholder and decided to focus the hanging fish bowl itself, making cleaning and maintenance less of a chore.  Also, we didn't want to get involved with animal-safe, clear-silicone, glass sealant - too messy.  Forgive us for dumbing this one down! 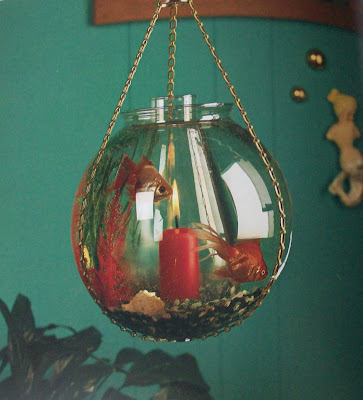 We hope we won't get in trouble for copyright infringement,
but we had to show you the the goal for which we aimed.

The instructions are relatively simple: connect three equal lengths of chain to an ordinary key ring, attach them again to another key ring, attach all three strands to yet another key ring  and hang from a ceiling hook, insert ceiling light-turned-fish bowl and done!  Having been exposed to unhealthy doses of retail merchandising, our natural inclination was to make a trio of these to hang at staggered lengths in the corner but we resisted the urge until we could make one successfully.

Here is what we came up with... 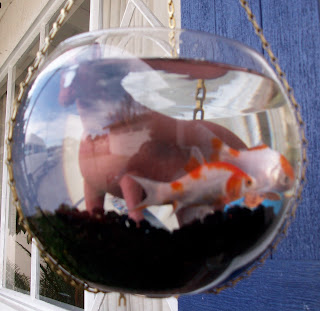 We toyed  with the idea of a sea horse... 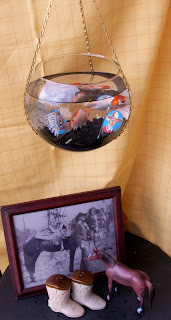 We decided on a Western theme because that is what we had around the house.
Did you know that plastic, fish bowl plants are $5.99??!!! Too rich for our blood. 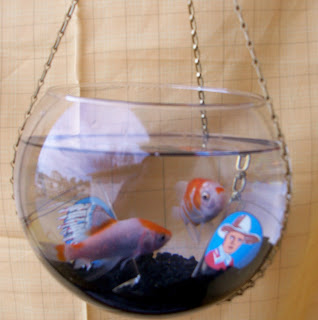 
My underestimation of the degree of difficulty with this project may have been a little premature.  Truth be told, I wrote most of this before tackling this project and even before I went hunting for materials.  Issues: the recommended chain is about the most expensive miniature chain that you can get, nobody sells clear-glass globes for ceiling-mounted light fixtures (I went to four thrift stores, two hardware stores and a lighting "super center" before I settled on a regular old fish bowl), fewer and fewer pet stores carry fish supplies.  I must reiterate that these projects are expensive!*


Maybe we should have been a little less ambitious and stuck to the dictates of our skill level. 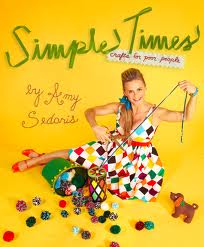