Collecting: Send me a letter, Send it by mail!

Having always loved old stuff, I was putting together weird "vintage" looks from the time I was in elementary school (maybe one day I will really embarrass myself and scan some photos of me wearing things that I thought were cool in junior high - but probably not).  I always took for granted the fact that I had an innate connection to old things and therefore became lazy in researching.  Plus, my interests are so varied that I never invested much time in developing a more-than-superficial knowledge of any one thing.  As Peggy Lee intoned, "I know a little bit about a lot of things."

I love finding something old that I have never seen before.  I also love getting real mail.  While thrifting the other day, we came across a stack of leather postcards, embossed with cool illustrations and witticisms dating from the early 20th Century - the perfect combination!


Almost all of the postcards we found are dated 1907 and marked Hutchinson, Kansas.  While Kansas was admitted to the Union in 1861, 1907 was still Oklahoma! time.  These leather cards gave a real flavor of a state that was rooted in the frontier, but cosmopolitan enough to use styles and images reminiscent of Charles Dana Gibson.  As the song says, "Everything's up to date in Hutchinson, Kansas"  - or something. 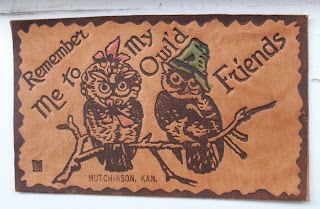 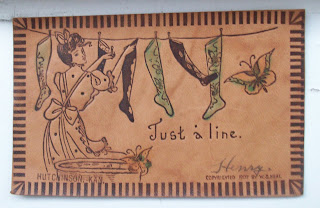 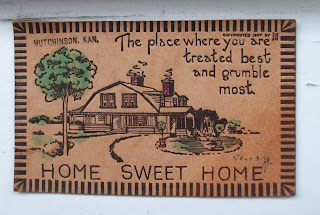 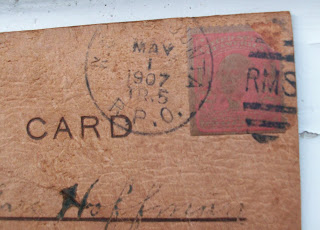 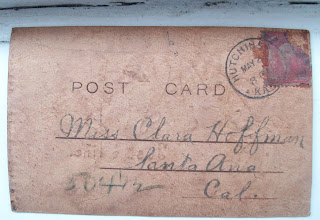 In doing some research on Clara, I found a marriage record of a Clara Hoffman and Henry Albrecht from around the same time in San Francisco, CA.  If you notice, several of the above postcards are inscribed "Henry."  What do you think?  Knowing nothing at all about collectible stamps, I looked up the red-and-silvery image of George Washington.  I was excited to learn that in the last 100 years this Scott #319 two-cent stamp (issued in 1903) has increased in value over 1200% - meaning, that each stamp is now worth 25 cents!!!

For me, the best part of finding something old is thinking bout the hands that held it before mine.  Corny though it may be, I wonder who Clara and Henry were.  I wonder what she wore as she met the mailman everyday waiting for the series of postcards that were sent to her addressed only with her name and the city in which she lived.  I imagine the attic where the long forgotten correspondence sat for over 100 years.  I get a bit disappointed that after such a long time, these historical artifacts of a family's genealogy ended up in a shoebox at The Salvation Army - heartened only by the fact that they are now in my care.  Then I start to wonder where all my crap is going to end up after I've kicked the bucket.  To again quote the inimitable Ms. Lee, "Is that all there is?"  Until then, I'm going to enjoy my postcards.