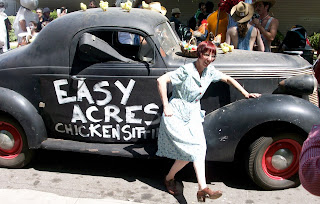 For about one hour on the morning of Saturday, April 30, it rained feathers on Colorado Boulevard.  Did a poultry truck explode?  No.  Was it the end of days?  No.  Was Pasadena experiencing some kind of freak storm?  Well, kind of.  Once a year Pasadena closes a section of Colorado Boulevard and opens its arms to everyone and everything that the very traditional Rose Parade would never allow.  Known as The Doo Dah Parade, this exercise in madness has a 30+ year history of synchronized-dancing business men, giant cat floats, gothic stilt-walkers, transvestite surf-guitarists, hula-hoopers, and every other harebrained scheme the likes of which any sane person would never imagine.  This stuff is beyond wacky tacky.

Our friend Anna Goeser, inventor of the Mojave Bonsai and owner/founder of Easy Acres Chicken Sitting (eastside Los Angeles' premiere chicken-sitting service) decided to enter the parade as a novel way to promote her business.  The idea behind our entry was chicken-sitting, dust bowl refugees.  Given our family's long and storied Okie heritage, we found this a comfortable fit and committed ourselves wholeheartedly to the endeavor.

We lobbed easter eggs into the crowd, distributed business cards and cast about 10 million feathers to gusty Santa Ana winds.  In return, the crowds pelted us with marshmallows and tortillas (I'm pretty sure that it was good-natured although the girl with the marshmallow air rifle makes me wonder).  I'm truly grateful that I was not in charge of clean-up.


Strangely enough, we were not the only hillbillies with chickens at the parade.  The spirit of the parade took over and we joined forces with the performers from "Diatomaceous Love" who brought their own tractor, jug band and live chicken!

Going into this, I really thought that this would be a once-in-a-lifetime gig.  We had such a great time, however, that I am already planning for next year.  We danced, played the kazoo, littered freely and met some truly awesome people.  My number one plan for next year is to bring sunscreen so bystanders will remember that we were promoting urban, chicken farming not "Attack of the Killer Tomatoes."