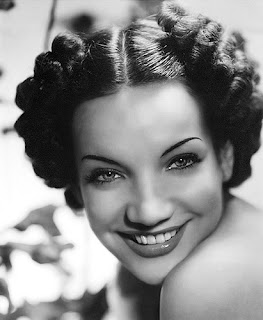 Carmen Miranda was born in Portugal!  Yes, the archetypal Brazilian who put Brazil on the map and introduced the Samba to the consciousness of the world was a native of Portugal.

Born Maria do Carmo Miranda da Cunha in 1909, her family moved to Rio de Janeiro shortly after her birth.  In the beginning of her career she dressed in contemporary modes of the day and became famous for her beautiful interpretations of the samba.  Her international fame exploded after she played in the 1939 musical revue "Streets of Paris" on Broadway.  A one-woman Good Neighbor Policy, Miranda quickly began her American film career playing herslef in a musical sequence from the 1940 Fox film Down Argentine Way.  From then on, she was about as famous for her costumes as she was for her voice.

Her beautiful phrasing and sensual dancing could not be hidden under the mile-high turbans that she wore but she will always be remembered for her extreme presentation of "bahiana" style. It seems a sacrilege to relegate Miranda to anything but Technicolor but several of her film were in black and white??!!  Some of her get-ups, many designed by Miranda herself, were so ridiculous that even Donald Trump would have a difficult time questioning her wacky tacky credentials.
﻿

I tried to cull some images to show that there was more to Carmen Miranda than just the iconic "Lady in the Tutti Frutti Hat."


At roughly five-feet-tall, Miranda's diminutive stature was obviously overshadowed by her huge presence, enhanced exponentially by the crazy platform shoes that she popularized during the 1940's.

One of the under-acknowledged high-fashion trends that was born at the tail-end of the depression and continued into the 1940's was wild platform shoes.  Here are a few pairs that Miranda could easily handle, but in which most would break an ankle. 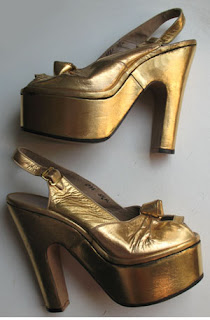 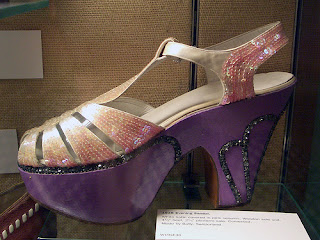 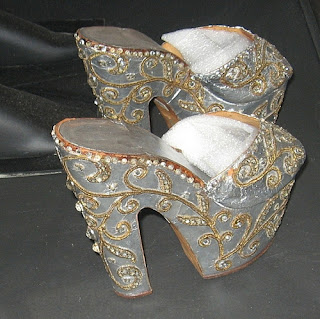 Carmen Miranda was above all else, a performer; she gave new meaning to the word "trouper" during her final performance.  In 1955 Miranda made a guest appearance on The Jimmy Durante Show.  She wowed the audience with her signature costumes, malapropisms and SAMBA!


At about 3:31 she drops to one knee after suffering a mild heart attack mid-dance.  She goes on to continue the routine and finish the show!!!  She died in her home of a second heart attack later that evening.  What a woman! 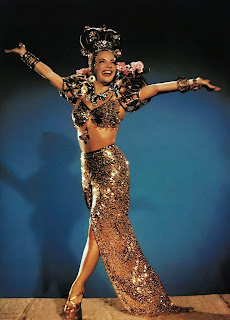 In her lifetime, she took some heat from Brazilians for being "too American" and for becoming a caricature of herself and her country.  The ill will became so strong that for a period of time, Miranda refused to return to Rio.  In the end, however, she was embraced by her country and her death was mourned by the people of Brazil.  I am not a huge fan of biopics, but I would LOVE to see one done well about Carmen Miranda.  The trouble would be finding someone with the charisma, dynamism and talent of Carmen Miranda- a difficult task indeed!