Silly Cinema: What a Way to Go! 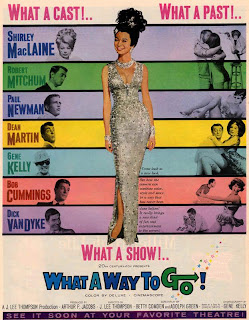 Any kid growing up in Southern California in the 70's and 80's remembers Tom Hatten and his Sunday "Family Film Festival," on Channel 5.  He was host, cartoonist, and one of the first television personalities that I remember.  He would introduce family film staples like Pippi Longstocking and movies from the Jerry Lewis oeuvre.  During breaks, he would share behind-the-scenes information on the film and draw cartoons.  Sadly, it is the type of program that doesn't really exist on television anymore.  On Sundays, network television is a miasma of infomercials and sports programming.  I miss Pippi - call me old fashioned!


In waxing nostalgic about "Family Film Festival," I determined that this program, combined with the considerable influence of my paternal grandfather (a Hollywood aficionado), began my obsession with classic films.  I wondered what films I would choose if I ever hosted a wacky tacky film festival.  What a Way to Go! starring Shirley MacLaine would definitely be on the short list of contenders.

The film centers around the relationship woes of MacLaine's Louisa May Foster.  Louisa is a small-town girl who is looking for a sweet, small-town boy with whom to create a simple, small-town life - much to the chagrin of her mother (a vicarious, fortune hunter).  She is hounded by Leonard Crawley (Dean Martin), the swaggering, arrogant heir to the local department store fortune.

Louisa has not a mite of interest and instead falls for Edgar Hopper (Dick Van Dyke) proprietor of the local general store.  Louisa settles quickly into the simple life when Hopper becomes unintentionally obsessed with building his business.  He becomes a huge success before the fickle finger of fate intervenes.

Louisa, left with a lot of money, decides that to find herself she must move to Paris and live the vie de boheme.  She meets Larry Flint (Paul Newman), a bohemian artist who shuns the bourgeois ideals of modern society.  Louisa dreams of their life in terms of a saucy foreign film but there is no happy ending.

Resigned to the fact that her destiny is to live a life of wealth, Louisa takes her ever-growing bank account and falls for tycoon Rod Anderson, Jr. (Robert Mitchum) and settles in to a "Lush Budgett Production."  The love story comes to an abrupt halt with a hilarious (and shocking for its time) episode with a bull.

All of MacLaine's gowns were designed by Edith Head.  Dig the crazy, red, near fetish-inspired, Asian gown and the backless number....yowza! 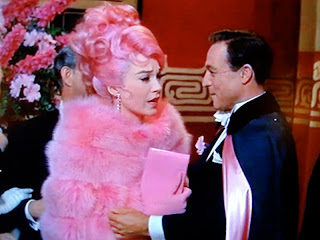 Totally unsatisfied to live in the lap of Hollywood luxury and left with an even larger fortune, Louisa decides to give it all away to the IRS.  Thinking that perhaps she has gone insane, she goes to see psychiatrist, Dr. Victor Stephanson (Bob Cummings) - big mistake!

Without giving the ending away, Louisa eventually finds happiness with someone from her past but isn't let off of the hook that easily.  Needless to say, fate takes a hand!


What a Way to Go! is a wacky tacky classic because it was a decided break from the formulaic films of the 50's (which we also love) both in its sensibility and in its desire to spoof popular movie genres.  The stars, instead of looking and acting at the peak of their personal perfection, eagerly poked fun at stereotypes as well as their own studio-created personae.  The costumes, the musical numbers and fantasy sequences, especially the foreign film with MacLaine and Newman, are wacky tacky genius.  I guess if I could choose a way to die it would be watching amazing movies - what a way to go! 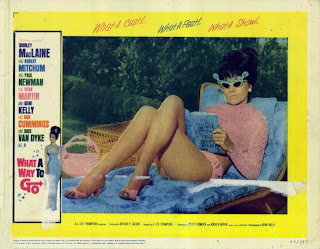