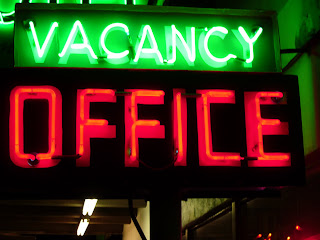 Hi-how-are-ya! Hi-how-are-ya! Hi-how-are-ya!  When was the last time you immersed yourself fully in the indigenous culture of your country?  When last did you slough off the cares of our modern, workaday world for the purposes of cultural appreciation and personal enrichment?  I am always open to a spiritual awakening - an opportunity to open my heart and mind.  I embrace the chance to really "walk a mile in another man's moccasins," as it were.  In search of such an experience, I sought out, nay, I was called to the Wigwam Villages of San Bernardino, CA and Holbrook, AZ.  The Wigwam Villages were the vision of  Frank Redford, a Kentucky native, who built his first wigwam in 1933 to capitalize on his collection of Native American artifacts.  What started out as a roadside attraction dedicated to Indian culture soon turned into a motel concept and The Wigwam Village Motel was born.  In total, seven Wigwam Villages were built from Kentucky to California.  For the purposes of this blog post, we will be using the terms "wigwam" and "teepee" interchangeably - just to keep it authentic!


Wigwam Village #7 (est.1949) in San Bernardino, CA is a veritable diamond in the rough.  This is not a stale cliche - "rough" is an accurate description of the surrounding area.  My mother's people are from San Bernardino; I can remember the dreamy days we spent with my great-grandmother and great-aunt in their turn-of-the-Century, San Bernardino homes.  The area, while decidedly working class, felt old-timey and safe. Unfortunately, the last few decades have been less than kind to San Bernardino.  Yet, somehow, it felt good to be there - especially in a teepee! 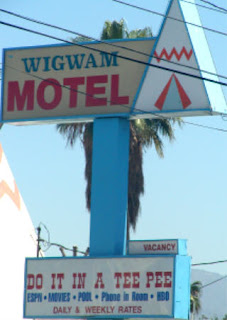 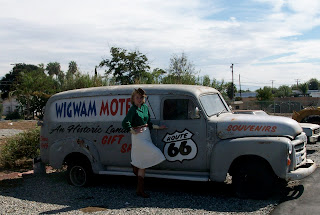 Rating: ^^^^^^^^^ (9 wigwams) - The facilities are well-maintained and the staff is very courteous and seemed genuinely happy to have us.  They allowed us early check-in, gave us recommendations for places to eat and even took our photo and added it to their Facebook page!  A one-wigwam deduction was taken for the boring, standard motel furnishings.


Wigwam Village #6 in Holbrook, AZ was built in 1942 by Charles Lewis as a wigwam franchise.  According to the motel website, the payments to Frank Redford as franchise fees consisted of the dimes collected from the pay-radios installed in each teepee!  We liked the exterior of these wigwams better than the San Bernardino location as they look like the picture postcards from the 40's. 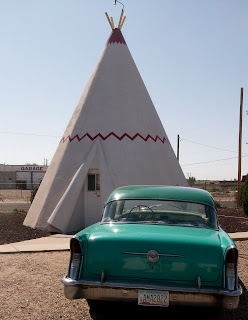 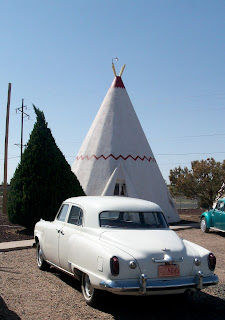 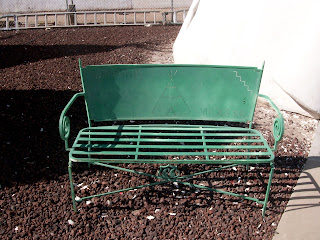 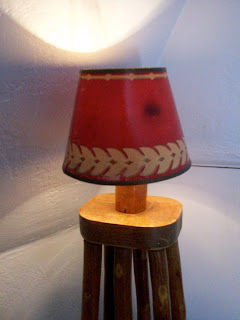 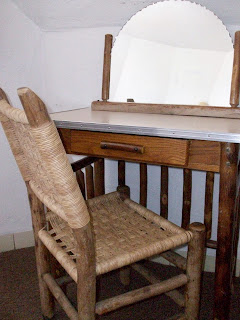 We were happy to learn that the room's furnishings, including the quirky,
bedside lamp and desk/vanity were all original. 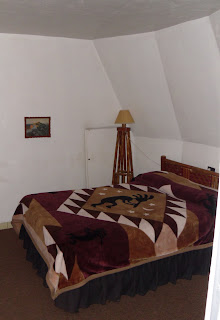 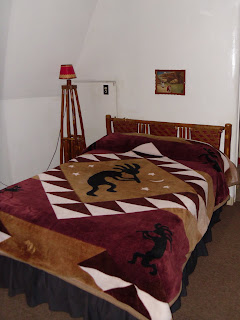 The room was surprisingly roomy - enough for two beds.
My biggest complaint was the distracting, southwestern bedding! 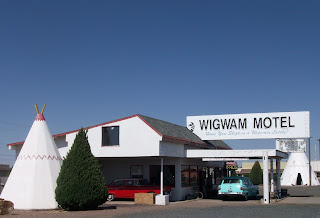 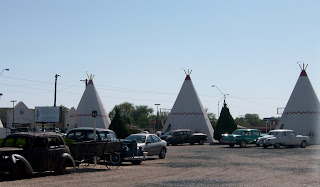 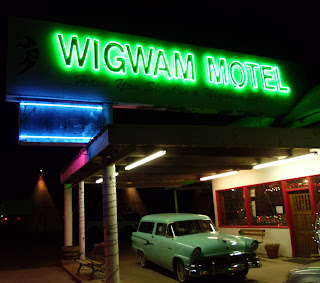 Rating: ^^^^^^^^^ (9 wigwams) - It is hard not to give a perfect 10 to a motel that has operated for nearly 70 years by maintaining the look and feel of true, vintage-American roadside/Route 66 history.  Really, who doesn't want to sleep in a wigwam?  A single wigwam deduction was given for a less-than-immaculate bathroom, proximity to the bustling railroad tracks (all-night freight trains) and those terrible, I mean terrible, bedspreads.  The staff was accommodating, the sleeping quarters were tidy (bonus point for the original art/furniture), the exterior of the wigwams were well-maintained and the vintage cars added greatly to the atmosphere.

Wigwam Village numbers 6 and 7 are independently owned and share only a common history.  Beyond the San Bernardino and Holbrook motels, there is only one other remaining Wigwam Village.  Wigwam Village #2 is located in Cave City, KY which means just one thing - we'll be seeing you in Kentucky for another authentically-Native American experience.  How!!!