Just by the very skin of our teeth did we manage to see the exhibit of Debbie Reynolds' priceless collection of Hollywood history before it goes to auction tomorrow, June 18.  Okay, maybe it isn't exactly priceless (every item was marked with an estimated auction value) but imagine the feeling you'd get knowing you owned the iconic dress Marilyn Monroe wore while the subway gave her a moment of very-personal air conditioning in The Seven Year Itch - pretty priceless, I'd say.

For the last few weeks, The Paley Center for Media in Beverly Hills has hosted a preview of Reynolds' collection.  As world-champion procrastinators, we - of course - waited until the last day to go.  It was an amazing experience to see the very costumes that inspired my love of costume history and design.  Pieces worn by Rita Hayworth, Lana Turner, Debbie Reynolds, Lucille Ball, Audrey Hepburn, Claudette Colbert, Julie Andrews and more were on display.  Pieces from some of my favorite movies were less than two feet from me.  Pieces from my favorite Hollywood designer, Walter Plunkett, were close enough to touch - but I refrained.  Maybe I'll do a future post on the art of self-control!

It was a slightly-unsettling moment when Mary became giddy over the very-faint "pit stains" on the above Edith Head creation.  "Grace Kelly sweat too!"


Many of the garments I recognized on sight.  I tried to remember the history of every item, but as you'll see with some of the garments featured below, I failed.  If you know the provenance of an unmarked piece, please feel free to let me know.

The jewel in this collection's crown, in my opinion:


We're pretty sure Audrey Hepburn farted in that dress...

The costumes for Singin' in the Rain were designed by Walter Plunkett who designed many, many Hollywood classics including Gone With the Wind and Pollyanna.

The green frock is definitely one of my favorites! 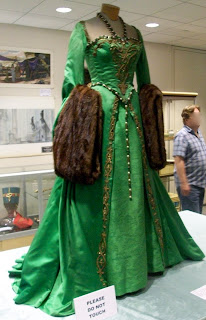 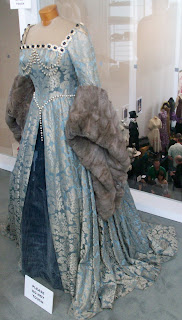 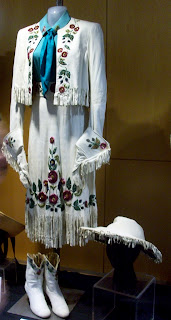 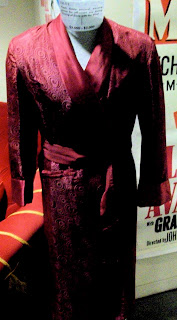 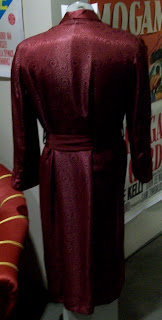 The collection consists of more than just costumes.  Reynolds has amassed many pieces of ephemera, artifacts, and art by, about, and for Hollywood heavyweights.  Here are but a few.

A more thoughtful, conscientious blogger would have posted all the details weeks ago so those who were unaware of the event could have gone.  Being the very mean-spirited, thoughtless person that I am, I will just tell you that if you missed this, you missed a GREAT thing!!  As many of these gems will be sold off to private collectors, it is not only the last time they will be seen together, it may be the last time that they are ever seen publicly!  Surprisingly, not all of the estimates seemed outrageous.  We'll have to wait until tomorrow to see how it all plays out.  The infamous dress featured below has an auction estimate of $1-2 million - well worth it at twice the price!!!