I hate to admit it, but I am an idea man.  Getting those ideas off of the ground and turning them into something lucrative and/or fulfilling would be great but really, I just like to get good and lost in them.  I try ideas on like shoes and walk around just to see how they fit.  I take time to thoroughly wallow in them for a while before I haphazardly abandon them in favor of my next "stellar" idea.  Nothing impresses me more than a person of vision AND productivity - a person who takes her amazing idea and, through creativity, hard work and commitment, actually turns it into something legitimate.  Such is the case with my friend Tabitha and her amazing, children's theater production, Seas of Science. 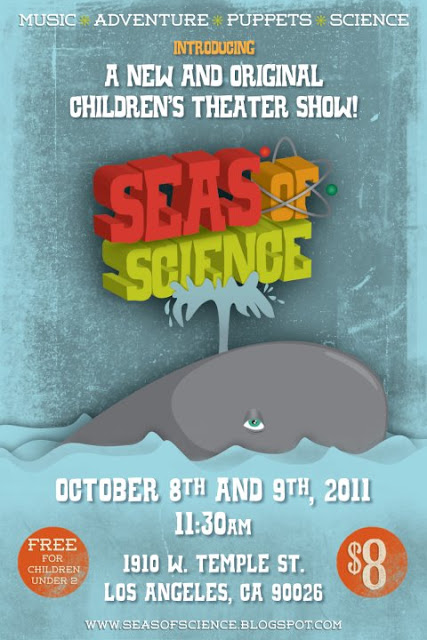 Tabitha is a real-life scientist!  With Seas of Science, she has transformed her love of science into an interactive, theater experience that actually challenges kids' brains to get them interested in the sciences.  As you can see from the poster,  Seas of Science, is "music, adventure, puppets, science."  It is like the illegitimate love child of Bill Nye the Science Guy and Pee Wee's Playhouse witha dash of Dora the Explorer. Basically, it is a no-fail, laugh riot that has kids fully engaged and leaves them learning when they least expect it.  One of the best reviews we heard came from a little girl that said, "I didn't think I wanted to come to the show but I loved it. I loved it!"


The show concerns Marisol, and average kid like you and me, who can visit the SS Science, a traveling ship inhabited by scientists, Barry the Robot, singing sea creatures, the Captain, and Sergio, a one-time king.  The ship is capable of taking Marisol and the crew anywhere in the world to solve her science-related quandaries.

The production begins with a disheartened Marisol, who has been accused of having a "black thumb," when her house plant fails to thrive.  She boards the SS Science to find out how plants grow.  Her encounters with everyone on the ship teach her about photosynthesis and how to nurture her own sickly house plant. 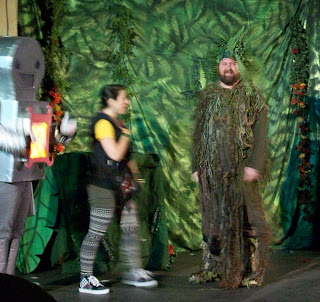 The SS Science sails to Brazil to visit the rainforest.  There, Marisol meets a fern from the forest floor who teaches her the difference between flowering and non-flowering plants.  He explains how plants grow and details the importance of sun, water and soil.


Audience participation was strongly encouraged. In fact, each audience member was given a card indicating sun, water, or soil that both inspired camaraderie amongst those holding similar cards and elicited the shouting and hollering the likes of which would put Manchester United fans on notice.  Every time one of the players said the word "soil," I had to be physically restrained.

By the end of the show, Marisol's plant is in full bloom and everyone aboard the SS Science is looking forward to the next adventure. Everyone in the cast was great, but our favorite was definitely Crewman Roger - a throwback to characters that could be found on any number of 60's and 70's children's shows like "Lidsville" and "H.R. Pufnstuf."  For me, whether intentional or accidental, Roger was the comic relief and "he" had me laughing from his first entrance, stage right!

A good friend would have posted about the production prior to the performances but I think a little late is better then never - especially when it is a good review!  While the run of the show has ended, a springtime production is in the works.  To follow its progress, be sure to check out the Seas of Science blog and "like" SOS on Facebook.

Congratulations Tabitha on a job well-done!  Bravo on turning your dream into a reality!  Science has never been so wacky tacky!