For someone who hates to be hot, it makes very little sense that I am absolutely wild about the desert.

Also, people aren't kidding when they talk about "dry heat" versus humid/sticky heat; there is a noticeable difference - like clinical-strength antiperspirant not being a necessity, for example.  More importantly, there is an atmosphere in the desert that is so uniquely serene and magical that I always jump at the chance to go out and explore its many wonders.  When we received an invitation to a wedding in the desert, we were excited.  When we saw that it was to be the wedding of our friends, Jodi and Swimmy, we were thrilled.

If you've never been to see The Cabazon Dinosaurs, you need to change your schedule and go; it is a wacky tacky must!  The area around them has been built up since the filming of Pee Wee's Big Adventure, but fortunately the Wheel Inn, the truck stop diner that is also featured in the film is still serving great food and homemade salad dressings.


We met up with Nick and Cynthia at the Wheel Inn so we could caravan out to the wedding site.  We tried to test out the old TESTO machine but...

Our next stop was the site of the wedding, The Shangri-La Cabin, in Joshua Tree.  Have you ever been on the Indian Jones ride at Disneyland?  That is nothing compared to the rutted, uneven, unpaved, dirt road we had to take out to the wedding.  I had never realized the level to which I had taken paved roads for granted until that night.  Driving past spooky hillbillies along the way, the wacky wagon nearly shook itself apart.  In the blackness of the desert past sundown, we were convinced that we were unintentionally cast in a horror movie.  When we finally found the Shangri-La Cabin, I knew the blessed relief the Israelites must've felt after those forty years.

The wedding site was awesome and the ceremony didn't disappoint.  Really, it was everything a wedding should be - romantic, funny, intimate, personal, and fun.

The ceremony and reception were held outside under a firmament filled with the brightest stars.  Living in an area suffering from the worst in light pollution, I had forgotten all about stars (seriously, we can see one or two on a good night).  The night sky was beautiful, the music was awesome ( I spent the entire night dancing), and there was a swing set!!!

I was having so much fun that I failed to get a picture of the delicious wedding cake - a giant corndog! 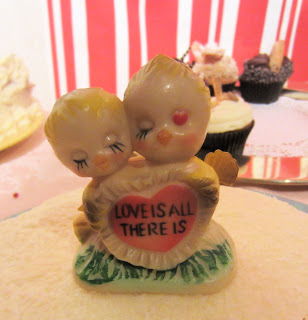 Congratulations to Jodi and Swimmy!  You guys are a perfect couple (notice I didn't say a couple of what).  Thank you for including us in your special night and your awesome party!  We expect to be on the guest list for the 50th Anniversary party!