Even when Mr. Tiny comes to town, there is still only one, indisputable, and supreme king of wacky tacky in Barcelona and that is Antoni Gaudi.

Architect, artist, designer, theist, naturalist, and innovator, Gaudi is synonymous with Spain's Modernista movement and, in turn, the very skyline of Barcelona.

Barcelona doesn't abound with the kooky, vernacular architecture that is so easily identifiable in America.  During our stay, we didn't see any buildings shaped like the merchandise or food stuffs being sold within; there were no oversized, cement fish, and nary a dinosaur nor flying saucer in sight.  There were no scale replicas of the Parthenon and nothing that we encountered with a circus theme.  While many American architects of the 20th Century veered towards the populist extreme, Gaudi's approach to his commissions was at once decidedly cerebral and unapologetically emotional.

Much like a tagger, Gaudi's signature is peppered all over the city but I thought for the purposes of this, our third and final blog about our Spanish adventure, we would focus on a few of Gaudi's major works, Casa Batllo, Casa Mila, La Sagrada Familia, and Parc Guell. (Note: please forgive my lack of appropriate accents; I have no idea how to add the "`")

The first bit of Gaudi we saw, we actually stumbled upon by accident.  Attempting to acclimate, we took a long walk all over town.  Slightly lost and looking to the North Star for guidance, we gazed up at just the right time to behold one of Gaudi's most recognizable works, Casa Batllo.  We learned that wealthy families would build these huge homes with the intention of living on the first levels and renting out the rest.  In a culture of penthouses and "Lifestyles of the Rich & Famous," it only occurred to me after I had climbed mountains of stairs everyday just why the wealthy families would opt for the lower floors.

Originally built in the 1870's, Gaudi was responsible only for the building's early-20th Century facelift.  From that time on, Casa Batllo has become recognized for its mask-like balconies, its refined Gothicism, and its ridged roof - covered in variegated, scale-like tiles to emulate a the body of a dragon.  It should be noted that Gaudi's signature fascination with lizards and dragons can be seen in nearly all of his work.


During our midnight stroll through the city, it became evident that one can't throw a stone in Barcelona without hitting a Gaudi structure.  Immediately across the street from Casa Batllo is Casa Mila, a Gaudi masterpiece through and trough.  Commonly referred to as La Pedrera (The Quarry), Casa Mila typifies Gaudi's aversion to right angles and tradition.


Another residential commission, La Pedrera has become a UNESCO World Heritage sight and is available for touring.  As I mentioned in our post about Barcelona, the best money we spent was on our bus tour of the city.  At first I thought it was lame to follow the herd; getting on a bright red, double-decker tour bus was little, well, "touristy."  I quickly learned that we could cover a lot of ground and be dropped at the doorstep of many of the landmarks that we had planned to visit anyway.  So, setting my pride aside, I buckled my sandals over my socks, slung my camera around my neck, and boarded the bus.  What was I, if not a tourist?

My favorite part of the tour was visiting the period apartment that was arranged as it would have been during the first days of habitability. 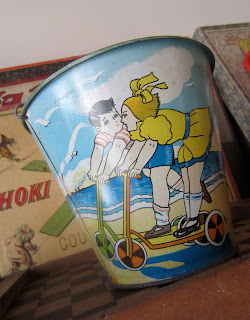 Anyone will tell you that Gaudi's, nay Barcelona's, crown jewel would be La Sagrada Familia - the ultimate symbol of his faith and fanaticism. 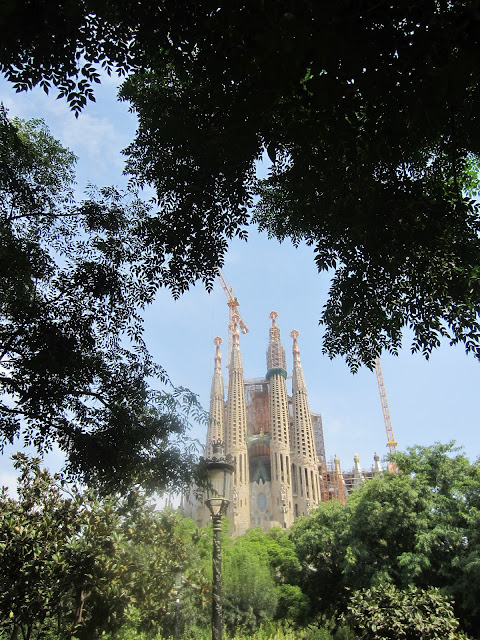 The construction of La Sagrada Familia began over forty years before Gaudi's death in 1926.  An active construction site to this day, it remains unfinished more than 80 years later.  In fact, I'm of the opinion that it will forever remain unfinished because that is half of the mystique.

Indeed, many people will tell you that LSF is Gaudi's magnum opus.  It probably is, but for all the faith that Gaudi was purported to have, LSF feels like a beautiful, experimental, quasi-religious tourist trap.  I'm probably taking my life into my hands here, but this landmark (sanctioned as an official Basilica by the Catholic Church only as recently as 2010) feels much more like a monument to man (one man in particular) than a monument to God.  Don't get me wrong, this place is unbelievable but it inspires none of the reverence or awe that one might feel when entering the older cathedrals around Barcelona.

I think we were also a little put off because there were so many rules.  Have I mentioned before that I HATE being told what to do?  The staff seemed so much more inclined to "tsk-tsk" unruly behavior like sitting in the wrong seat or taking a photograph two paces to the left of the approved photo-taking zone, than to be of any legitimate help that it became a distraction.  Actually we kind of turned it into a game to see who would get in trouble next, the tourist who came into the church wearing a baseball cap or the local who ducked the stanchion to avoid having to walk to the very back of the basilica just to walk the full length of the aisle to get to the hardcore prayer section at the very front. 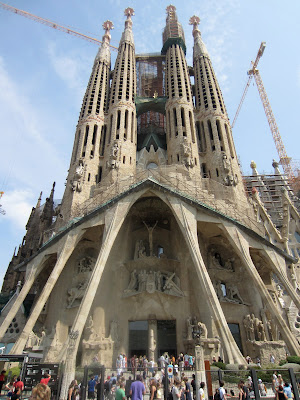 With my ranting completed, I can tell you how crazy and cool LSF was.  Part Gothic cathedral, part modernist masterwork, part acid trip, LSF is the definition of pastiche.  Given that it has endured over 100 years of construction, scattered direction, and lack of funding (continued construction relies on ticket sales and private donations), the stylistic elements are all over the design map.

I kept marveling at the magnitude of the building and the ability of workman to accomplish the job set before them.  Could you imagine putting plans for LSF in front of a contemporary construction crew and telling them to get going?  They would understand the term "open concept" but would immediately get tripped up by the lack of granite countertops.


After traversing nearly every inch of the earthly level, just like an ascension into Heaven, we made our way skyward to the top of the towers.  An elevator was the only way they would allow us to the top; I'm thinking they saw us coming and didn't want to have to perform a special rescue when we gave up in exhaustion halfway up the tower.

Envisioned as an answer to the pristine, symmetrical, manicured parks of other great European cities, Parc Guell is my favorite entry in the Gaudi oeuvre.  Of course, as a natural skeptic, I couldn't shake the thought that all of this was a calculated effort to put one over on society. 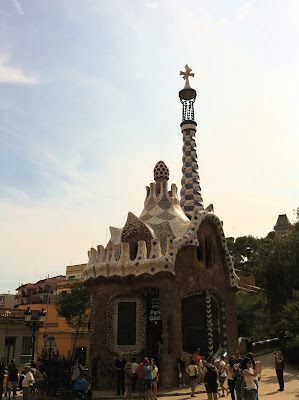 The entrance to the park is like a mosaic-heavy version of Hansel & Gretel; instead of icing and candies of every kind, shards of recycled pottery and ceramic tiles adorn the fairy tale structures. 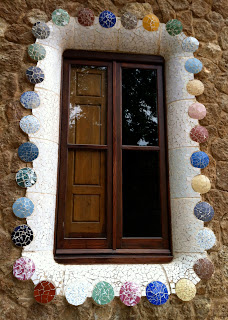 Parc Guell was more than a park; it was also an experimental real estate development that by all accounts was a dismal failure.  In the end, the business loss was the world's gain and the Park is open to the public. 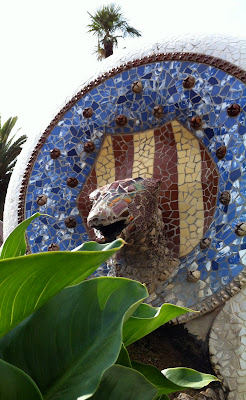 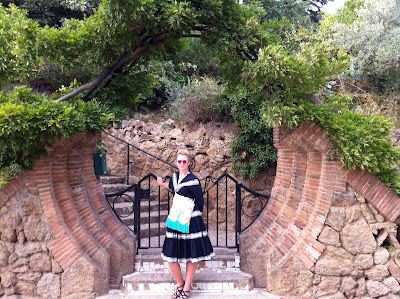 One of the highlights of Parc Guell is getting to visit the Casa Museu Gaudi, the home that served as Gaudi's private residence during his tenure over the construction of La Sagrada Familia and where he lived until his death in 1926. 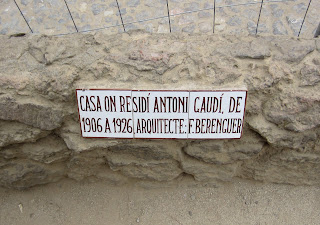 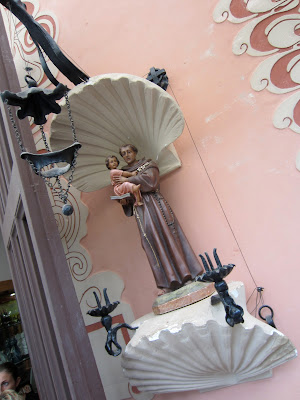 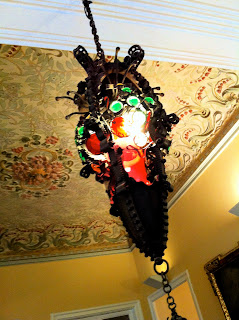 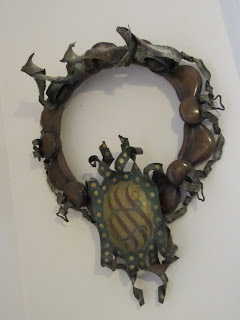 There was no lack of decorative arts in Gaudi's home.  My affinity for crazy light fixtures
was momentarily distracted by this metal wreath that I seriously considered bringing home as a souvenir.

The funniest part about Parc Guell is that it was impossible to escape the feeling that we were on a  never-ending hike.  The park is the top of a hill, ugh.  The park itself is built into the side of a hill so there are stairs upon stairs upon stairs to climb once inside the park, double ugh.  So why, with all of this hiking and stair climbing did I not return home as lithe as a gazelle and light as a feather?  Why? (please see: La Colmena Bomboneria)

In the end, I have not made the decision for myself whether Gaudi was a genius or a madman.  With every work that we viewed, the story of "The Emperor's New Clothes" kept entering my mind.  Differing from the story in the fact that Gaudi actually fabricated a product, I couldn't help but feel that he was gaining fame and earning money by creating the most bizarre forms he could muster and convincing his patrons that the results were the inspired creations of a genius Modernista.  Was his real gift the charisma of a brilliant salesman and the fervor of a religious convert?  I wonder.

A "bill of goods" or the groundbreaking ancestor to modern architecture, Gaudi's body of work is, at its core, a healthy dose of Spanish-flavored wacky tacky.

I hope you've gotten your fill of Spain as we now return to our regularly-scheduled wacky tacky programming - American style!!!