I guess if I could have the ultimate backyard of my cheesy, childhood dreams, it would look just like the one from "Out of Scale," one of my all-time favorite Donald Duck cartoons.

While not nearly as persnickety as Donald when it comes to exact scale, I just can't help but love miniatures.  The mountains and meadows, the landscapes and houses, the chipmunks setting up housekeeping in the little houses - I want it all.  All of it plus water features - don't forget the water features; water features are essential in creating the ideal the atmosphere of my dream backyard.  And topiaries.  A snack shack couldn't hurt either.  I guess what I really want is to live in a miniature golf course.  A miniature golf course with a train running through it. 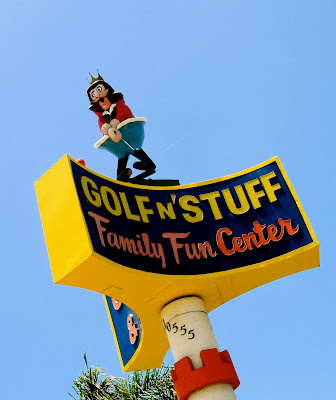 For too long at wacky tacky, we have become so obsessed with finding and sharing beautiful bowling alleys, that we neglected all of the joy and wonder that can be found in and around their sisters-in-20th Century-novelty and leisure, miniature golf courses!  A few months back we decided to resolve the issue by venturing into a pretty spectacular local course, Golf N' Stuff, in Norwalk, CA. 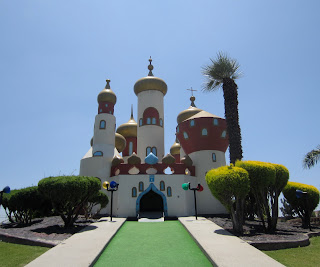 I can't think of any other place on earth, aside from Las Vegas perhaps, where one could encounter an Arabian palace, a tiki hut, a bathing elephant, a castle, and a haunted house all within steps of each other.  Alright, alright, Disneyland has a bunch of that stuff too.  Aren't we lucky to live in a world of such wacky tacky abundance?! 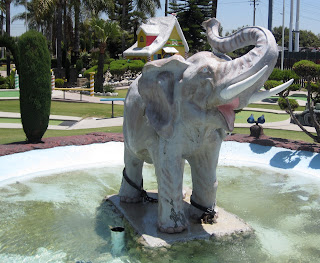 Born in the 1910's, mini golf really reached the peak of its first wave of popularity in the madcap 1920's.  An era of unprecedented prosperity and abundant leisure time, golf became one of the decade's most popular sports.  At a time when people were finding novelty in everything and creating novelty where there was none before (flagpole sitting, marathon dancing, goldfish swallowing), miniature golf just seemed like a natural progression.


As evidenced by the above photo, early mini golf courses weren't nearly as fantastic as the courses that were yet to come.  I'm so glad a tradition of excess emerged and subsequently became the norm because my favorite part of the sport is less about the sport itself and more about the marvelous, themed structures that create a fantasy world of diminutive proportion.  Looking at all of these structures made me wonder which one I would choose to live in given the opportunity.  Which one would do you favor?


It's not just the buildings though, it is the horticulture as well.

Do you have a particularly neat miniature golf course that you frequent?  What was your first mini golf experience?  Let us know!