Signs of the Times: Henry's Tacos, Long Live the Memory

I wish this was a "Chow Time" post but evidently, it was not meant to be.

Initially I was resistant to the idea of blogging because I am the late adopter of all late adopters.  When technology is involved, I am usually the last person to make the scene.

Fortunately, I made the leap, resulting in friends/virtual pen pals all over the world.  Even with this reliable network of cool folks who are always on the lookout for the weird, wild, and wonderful, it never ceases to amaze me when I am alerted to something wacky tacky in my own backyard by someone who lives clear across the country.  Such was the case when our pal Mod Betty at Retro Roadmap, informed us of Henry's Tacos, a googie taco stand in crisis in North Hollywood.  Sadly, after a battle with an evil tyrant of a landlord, this San Fernando Valley landmark closed this month after 51 years of business.

Now, technically, North Hollywood is slightly further afield than my own backyard, so Henry's was a place that I did not frequent and had not heard of until the brouhaha surrounding its application for landmark status.  Hearing that its doom was very much impending, we went by twice before its official closing date only to find it well...closed.  At that moment, I would have given anything to sink my teeth into that prime example of authentic Mexican cuisine, the Taco Burger with cheese.


Nevertheless, I had to be sated alone by the groovy architecture and brilliant signage.

Most cases of a hallowed landmark shuttering its doors after decades in business would result in a tear-stained missive by Mr. Tiny founded strongly on the principle of our need to support local, old-timey, family-owned, wacky tacky, mom 'n pop businesses.  In the case of Henry's Tacos, however, the closing was the result of a greedy landlord and a small business owner's desire for recognition as an historic landmark.  I guess the real lesson here is "Go to these places while they are still around because one never knows when they will fall victim to neglect, greed, old age, indifference, or worst of all, 'progress.'"  For fans of the taco burger (I can't let it go), the good news is that there are plans to establish a new Henry's location with the reins being passed to a veteran employee.  Viva Henry's!!! 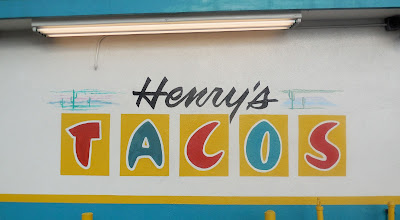 Thanks Mod Betty for letting us know about Henry's, even if we were a little too late - laggards in all things, I guess!