It's a restaurant story as old as the hills (see Vince's Spaghetti), a family successfully opens up a restaurant using a tried and true, family recipe, and subsequently establishes itself as a neighborhood landmark of hearty dining.  As word spreads and business grows, it becomes apparent that a second location across town would be the natural progression.  That second location opens to acclaim and the manager (usually a brother, son, uncle, cousin) decides that to increase business, the menu should expand, the hours should change, and the recipes should be refined.  Outraged at the young upstart, the original proprietor severs all ties with the new location and each facility runs independently of one another, refusing to change the name, the sign, or the very menu item for which the small chain became famous.  In all honesty, I don't know if this is the case behind Dinah's Chicken in Glendale, CA and Dinah's Family Restaurant on the west side of Los Angeles, but it is the story I made up to appease myself when I could find no connection between the two besides the signage, the chicken bucket, and the signature fried chicken itself. 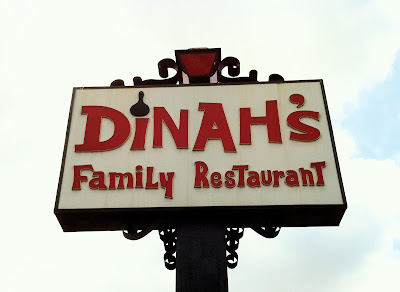 Opened in 1959, Dinah's Family Restaurant is definitely representative of its place in history.  With minimal updates, this fixture of West Los Angeles casual cuisine gives patrons an opportunity to catch a glimpse of midcentury, mid-level, Southern California dining. 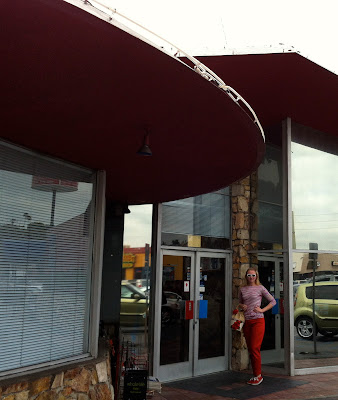 If you can't find the time to stop in for a bite, be sure to drive by and get a glimpse of the iconic chicken-bucket sign.  According to the website, Dinah's was the original bucket sign in Southern California and has been featured in multiple Hollywood productions, most recently in Little Miss Sunshine.

I do not have any idea what the real story is behind the two Dinah's.  Although I do have a second theory that someone was in the kitchen with Dinah "Strummin' on the ol' banjo" and that led to the "Fee, Fi, Fiddle-e-i-o" that wrenched the chain in twain.  If anyone has the real low down, please feel free to share.  Until then, treat yourself to some mighty-fine food and a song. 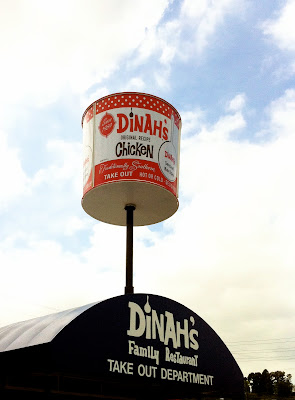 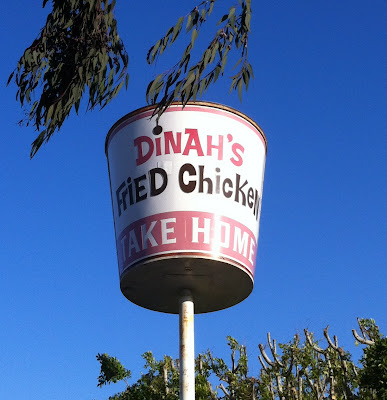