The longhorn steer, the saturated primary colors, the bent arrow, the promise of fully-functional neon - the Bill Johnson's Big Apple sign is everything that a roadside restaurant marker should be.  Like a wacky tacky homing beacon, it called out to us; so grateful were we that we stopped to take pictures of this masterpiece of vintage roadside, and then vowed to return after dark for a glimpse of the illuminated sign (and a bite to eat).

Well, in another entry into "Places that are better seen than tasted," we bring you the good and the bad of the Bill Johnson's Big Apple experience.  A Phoenix establishment since 1957, the Big Apple has multiple locations throughout Phoenix and the surrounding environs.  We, of course, chose Bill Johnson's original location.

Bill Johnson was not just a restaurateur, he was an entrepreneur and showman.  He was probably more well known for his eponymous radio program, broadcast from inside the restaurant, than he was for the BBQ beans and hamburgers that he shamelessly advertised between spinning records (listen here). 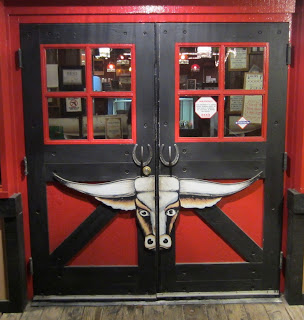 But after a long day of driving, sightseeing, and movie premieres, we were more interested in the promise of BBQ than music.  In the 50's, the Big Apple was open until two o'clock in the morning providing late-night sustenance of the edible and musical varieties.  We screeched into the parking lot at ten o'clock, fully prepared to be turned away - the Big Apple's 21st-Century hours end at 10:30.   Fortunately, the staff was very kind and the service superior; we were welcomed with open arms and even complimented on our weird get-ups!


Even had the vittles been entirely inedible, there was so much about BJ's Big Apple to love that we were able to look past the pedestrian fare and give the place our wacky tacky seal of approval.

When we first pulled into town, we met a charming, lifelong resident of Phoenix (except when for two years she lived in our hometown, what are the odds?).  We explained to her the types of places that we like to visit and asked her if she had any recommendations.  She recommended the Capitol Building and the local museum.  Truly loving legitimate history but hoping to direct her thinking more towards the wacky tacky end of town, we mentioned Bill Johnson's.  "Oh, the Big Apple....is that place still there?" came her reply.  Well, for a more ringing endorsement we couldn't ask.  If even just for a view of that beautiful sign, it is worth wending one's way down Van Buren Street to Bill Johnson's; it is so exciting, it may just have you doing The Big Apple!