What do you call a happy picketer?  Is there a title for the exact opposite for protestor?  A contestor, maybe?  Whatever his job description, this guy refused to be ignored as he took the concept of a sandwich board to new heights.  It was a good thing that we were already on the side of this proud ensign bearer; in fact, the very first thing we did when we pulled into the city limits, was visit one of Phoenix's most-beloved watering holes (and the reason for his masterfully hand-painted sign), MacAlpine's Restaurant & Soda Fountain.

Opened in 1929, MacAlpine's isn't just a static relic of its more-than-eighty-year history.  Instead of being a period-perfect museum, it is the genuine article - a living document of depressions, recessions, wars, and advancements of society and technology.  The restaurant is filled with memorabilia reflecting every one of the ten decades through which it has operated.  Heck, they even have a Facebook page! 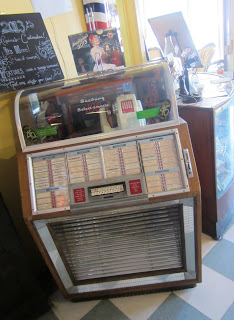 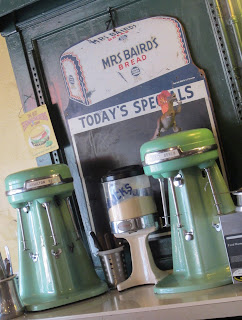 As seasoned road trippers and inveterate junk-food junkies, we can say that we have definitely enjoyed a tastier burger (it looked much better than it tasted).  However, we've never done so with such superior service in a facility that has been operating since the dawn of the Great Depression that also happens to be a VINTAGE STORE!!! 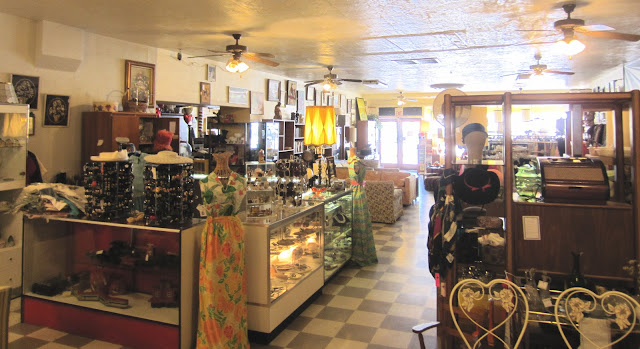 That's right, combining two of my most abiding passions, MacAlpine's is both a hash house and a rich repository of vintage clothing, accessories, housewares, and furniture.  A combination of road trip weariness and an overexcitement at the prospect of stuffing my face AND shopping for used goods all under the same roof left me too frazzled to take many pictures!

If you're ever in Phoenix, then hop in the old jalop' and head to the malted shop!  Make sure that you stop at MacAlpine's to get yourself a treat - of the frosty or fabric variety - or both!

"All the Cats Join In" - Benny Goodman 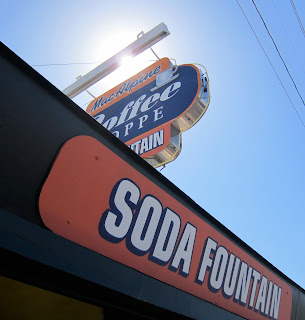 *Then you'd better let him out.  I couldn't let the joke go unfinished.

Remember, we are dangerously close to 200 official followers.  When we reach that pinnacle of success, we will be hosting a major giveaway!  Spread the wacky tacky word, won't you please?  THANKS!!!
Posted by Mr. Tiny at 7:05 PM