"Stop."  "Beware of Dog."  "Danger, High Voltage."  There are many signs in our world that simply cannot, and should not, go unheeded.

There are physical signs that we see with our eyes and then there are signs of the more spiritual variety - signs that are less prohibitive and more a call to action.  What action would you take if you came down with tuberculosis?  Well, I guess the answer these days is relatively easy - seek prompt medical attention for an extensive course of antibiotics.  In the 1930's, the answer often involved a major change of scenery, especially for an arid, desert clime.  Diagnosed with TB in the early days of the Depression, Seattle-based Boyce Luther Gulley, saw a sign.  Leaving his wife and daughter behind in their secure, if all too humid, home town, Gulley set out for the breadth and breath offered by Phoenix, AZ.

Left with just his thoughts, a dearth of materials, and the inspiration of the mystical western winds, Gulley decided that his call to the desert was the opportunity to fulfill a promise he made to his daughter; he would build her a castle.  Gulley's castle, is essentially the sister castle to California's Nitt Witt Ridge.  Built of found objects, recycled materials, and a weird cement slurry that included a heaping helping of goat's milk, Gulley's dream castle took many years to build and ended up with eighteen rooms and thirteen fireplaces (a particular point of pride for the tour guides).  Upon its completion, and the owner's death, Gulley's wife and daughter were notified that the home was finally ready for them.


Shortly after the Life article's publication, the Mystery Castle was open for daily tours given by Mary Lou who continued the practice until her death in 2010.  The castle continues to operate tours as an official "Phoenix Point of Pride" under the auspices of a trust/non-profit that maintains the facility. 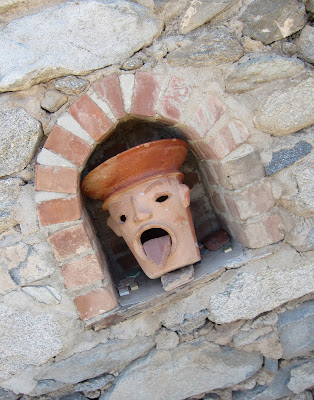 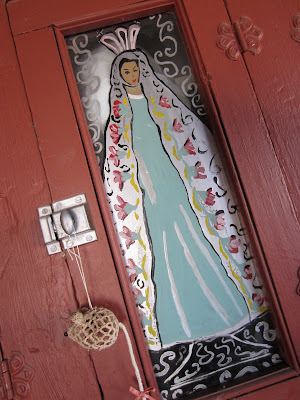 Operating without modern utilities until the 70's, 80's, and 90's (they were added over time), living in the Mystery Castle required a distinct level of dedication and a strength of character uncommon among most people faced with soaring temperatures and terminal illness.


The Gulley's home and its contents are the very spirit of wacky tacky.  As I mentioned, it was the home of a single, "art" loving, desert dweller.  Subsequently no efforts to change, move, or restore have been made, leaving the home exactly the way it looked at the time of her death.  There is almost too much wacky tacky that it distracts from the original structure.

The best times of the tour were those when we caught a glimpse of Boyce Luther Gulley's original concept.  Seeing past the four-foot, chocolate bunny statues and the cat decoupages to the stone mosaics, the Mexican tile, the skylights, the repurposed train tracks, the dumb waiter, the cantilevered, spiral staircase, was the chance to see through Gulley's visionary eyes.  All of these "trash castles" have to built by someone who is equal parts genius and madman; it is that delicate balance that fosters the perfect environment for the finest in wacky tacky. 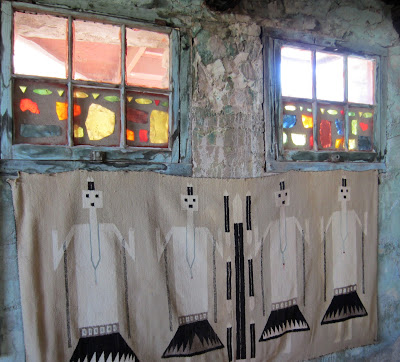 Every door at the Mystery Castle is like the famed trap door; there is a surprise and a treasure behind each one.  If you're ever in Phoenix, be sure to follow the sign and pay your respects to this living example of folk/outsider art, vernacular architecture, and human ingenuity.  What began as one man's sickbed promise tuned into a wacky tacky wonder for all to enjoy. 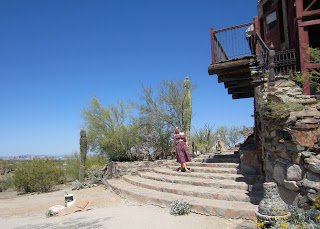 *Tours are offered Thursday through Sunday at a cost of $10 per person.