If you are going to visit "The happiest place on Earth," it would be well-advised to make sure that you are actually happy.  We waited until our last full day in Japan to explore a version of a theme park that is no more than twenty minutes from our front door; and while we weren't exactly unhappy, we were definitely at the point in our trip when the novelties of what we initially thought were the most charming customs and unique characteristics of Japanese culture were seriously beginning to wear off.  Our mental state, aggravated by an epic forced march through the bowels of Tokyo Station, followed by a sardine-can train ride, had us feeling (for the very first time) a little wistful for America - a land where dignity and restraint, minding one's manners, and respect for others are policies almost unanimously vetoed in favor of the freedom to complain...noisily...to anyone who will listen. 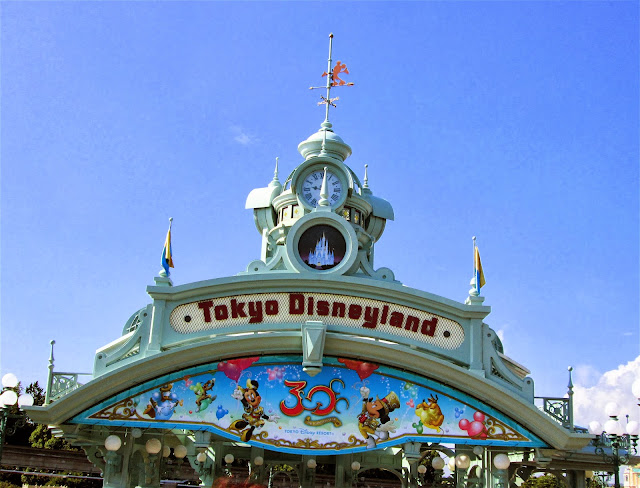 Don't misunderstand me, we truly loved Japan.  We even loved Tokyo Disneyland.  It was pretty marvelous getting the opportunity to see such a concentrated version of American culture as experienced in a foreign country.  We were just a little grumpy (and maybe sneezy, sleepy, and dopey too).

Despite our grumblings, things were looking up when we got to the ticket booth and realized that we could visit both of Tokyo's Disney parks for less than the price of a one-park ticket at home.  We began the day at Tokyo Disneyland where the recently-debuted "Happiness is Here" parade, as designed by our good pals, was taking place (an entire post will soon be dedicated to its awesomeness, stay tuned).


Mary put together an Instagram video of our Disneyland experience.
Please don't take offense; a natural mimic, I spent our whole
two-week vacation trying to refine my impressions and received
a host of compliments on my accent.

Having hit most of the highlights of Disneyland, it was high time (according to the Mickey Mouse clock) for us to head over to Disney Sea via the monorail.

Built just on the other side of a seawall from the actual sea, Disney Sea is a water-themed park rather than a themed water park; each land is dedicated to an area of the world that has a connection (if only very loosely) with a large body of water.  Instead of a railroad that circles the park (like Disneyland California), Disney Sea takes guests on a circular tour of the park via water taxi!  Although we arrived at the the park after sundown, the incredible effort taken to create beautiful landscapes and interesting environments was quite evident.


I will admit that it did seem odd to me to dedicate an entire day of our once-in-a-lifetime Japan adventure to a byproduct of distinctly-American culture - and maybe it was.  A trip to Disneyland is a requisite stop for those visiting Southern California but what American tourist makes it a point to go all the way to Japan only to visit Disneyland?  Actually, I can answer that.  We spotted a few couples/families who, in all their obvious Disney dorkery, apparently devote every vacation to exploring the world's Disney theme parks.  While we're not quite that dorky, we are happy to have visited Japan's "Happiest Place on Earth."


Do you think Disneyland is the happiest place on Earth?  If you went all the way to Japan, would you spend a day at Disneyland?