I can't believe it has been a year since our life-changing trip to Japan.  As I see no passport-worthy adventures on the immediate horizon, I will just have to honor the one-year trip-a-versary with some heretofore unexamined material; please bear with me as I moon over our magical days in the "Land of the Rising Sun."

Throughout all of the times I've been to Japan (once, including that excursion of last year), I've become aware that the most striking quality of the country is that it is a true study in contrasts.  Never have I been in a place where the ancient coexists so peacefully with the ultra-modern.  Citizens of Japan, as a general rule, dress and comport themselves in a manner highly-conservative, abstaining from ostentatious styles, conspicuous behaviors, and talk of a loose nature; yet the sight of a businessman looking at rather lurid comic books on the commuter train is not at all uncommon.  Aggravatingly-slim, our Japanese hosts and friends regularly ate this American-sized American well under the table.  From my perspective, the people are particularly non-religious, yet they are profoundly traditional when it comes to honoring ancestors and participating in sacramental rituals.  Lucky for them that, in a very literal sense, there is a shrine and/or temple on nearly every single block.  In short, one could not throw a stone in Japan without hitting a shrine or temple...and then seeing it ricochet off at least three more.

It should be noted at this point that, as a guest in a foreign land, I do recommend quite against the practice of throwing stones at sacred structures.  It is decidedly bad form and if I'm going to be called an "Ugly American,"  I want it to be about my face!

I'm unsure if it was acceptable but, after a primer from our Japanese sister, we really got into participating in the multi-step process of Japanese holy rollin' - there is a lot of clapping and bowing.


The temples are timeless to an eye wholly-untrained in the history of Japanese architecture, but it seems that each new temple is even more spectacular than the last. 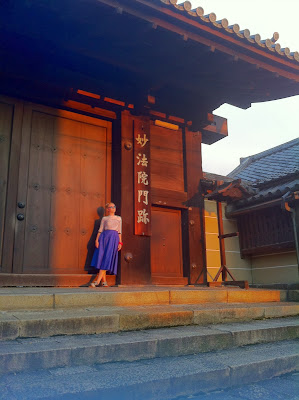 For all of the loveliness and grandeur found on the beautiful grounds of these gorgeous temples, a more subtle and more personal beauty is found at the neighborhood shrines.


The shrines offer convenient opportunities for daily communion.  Observers - and those far less observant - can pause during the day to express hopes and prayers (usually by jotting them down on a wooden plaque and hanging them on the edifice of the shrine).  Interestingly, many of the shrines are dedicated solely to a specific purpose, for example...

The best shrine was found in an out-of-the-way neighborhood in Kyoto.  Of course it was our favorite because it was the most inexplicably weird and awesome - at least to our Western way of thinking.  I'm sure there is a valid and beautiful philosophy behind the shrine's purpose...but we couldn't couldn't come up with one.  Why on earth, we wondered, would there be a heavenly porcine shrine?  WHY?!?!!

For as many temples and shrines as we visited during our tour of Japan, we never got bored with the experience.  We looked forward to the clapping, bowing, lighting, clanging, and washing opportunities to be had on nearly every street corner.  I can't wait to go back, heartily welcoming the chance to do some more Japanese-style holy rollin'.  "Shrine On, Nippon Moon!"