The Mysterious Chinese Castle of Jacumba: Episode I

As I was digging through boxes of family photos and memorabilia, I came across a small, square photograph of a house on a hill.  Details were few of the spooky, old house but the structure, trimmed in Asian-inspired woodwork, cut quite an imposing figure against the rocky desertscape. 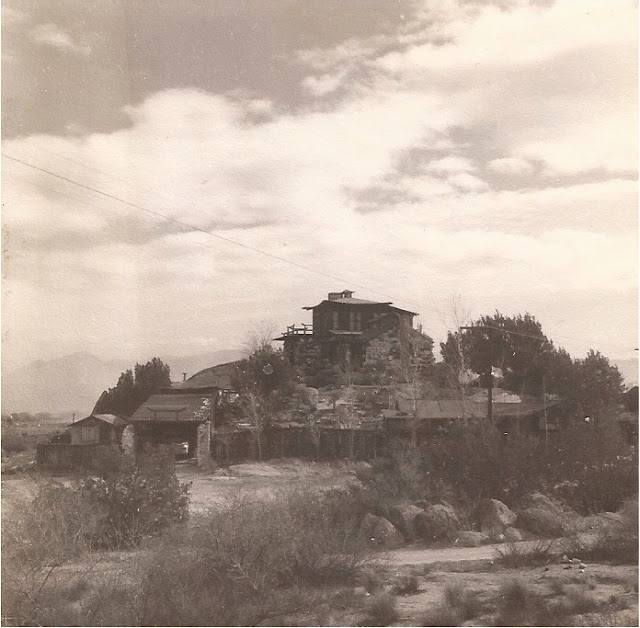 Dutifully scrawled on the back of the photo was a basic description of a few outbuildings and the home's rock-solid foundation.


But that was it.  Sure of neither the home's location nor the penman, I saved the photo for several years, actually scanning it and creating a blog draft in case I stumbled upon more information.  For years, the draft sat patiently, quietly awaiting the day the home's mystery would be solved.


I had heard rumors of a strange castle along the California-Mexico border that had once been a family landholding; as all the potential players had long since crossed the life-afterlife border, however, it seemed my geneo-real estate questions would forever remain unanswered - until, I kept digging for more family history.  One scorching day, I found myself in the garage, elbow-deep in a musty box loaded with photographs spanning eight decades.  Inside, I discovered a beautiful, spiral-bound album with a handwritten label taped to the cover that read, "Chinese Castle."  When one finds a family album labeled "Chinese Castle" and the contents have nothing to do with a trip to the Far East, it is obvious that a vein of pure wacky tacky gold has been struck!


Between the dusty, floral covers was a twenty-plus-year pictorial history of the Chinese Castle of Jacumba, CA.  As it happens, the house belonged to my paternal grandmother's aunt , Velma by name (an eccentric school teacher with a history of nude photos, multiple marriages, and a penchant for wearing safety whistles in her later years).


With her then husband, British novelist Harry Lee, Velma used the Chinese Castle as a vacation home and artist retreat (he for writing, she for painting).  As they had no children, they eventually sold-off all of their real estate...but not before taking a multitude of snapshots of their stony pride and joy, painted Empire Red.


At some point, Velma thought it necessary to document the history of her home in a brief, two-page essay.  I'm rather grateful she did. 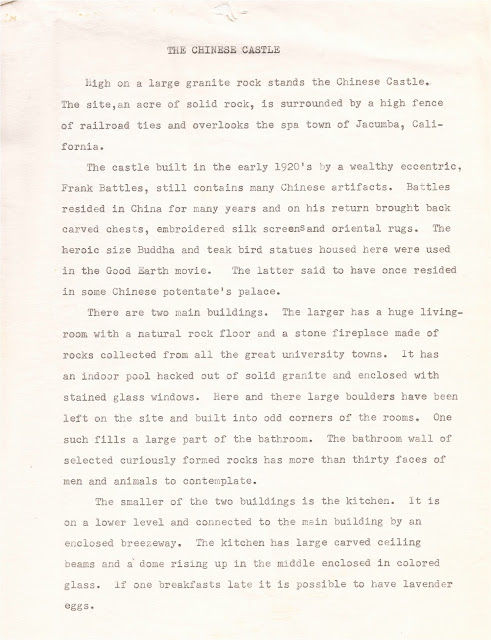 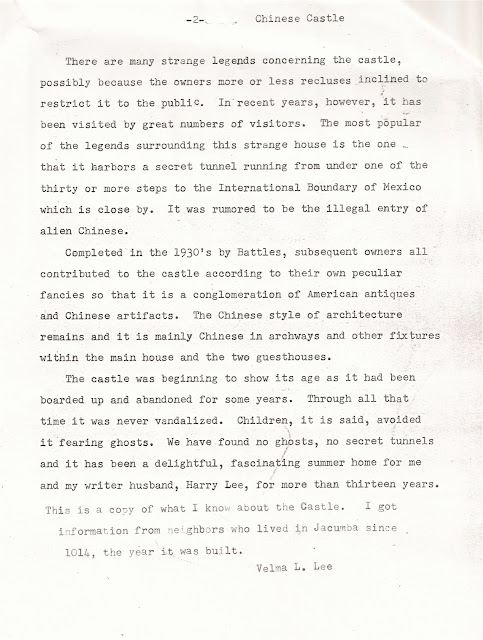 Included in the album was a mimeographed copy of a page from a book (source unknown) that featured a line drawing of the castle and a one-sentence description.


Selling the house in 1976, Velma kept in touch with the new owners, keeping tabs on the decoration and maintenance of the Chinese Castle.  She was even invited back for a visit.


Seeing the photographs and ephemera, Mary realized that she had actually been to the grounds of the castle on a long ago road trip; completely unaware of the family history, she definitely remembered making note of its wacky tacky magnificence.  With the discovery that our heritage included the Chinese Castle, the only thing to do was chow down on some chow mein and hit the highway to Jacumba.

We drove into the sleepy border town armed only with hopes that the castle was still standing and a disk to which I had saved every bit of Chinese Castle history that we had.  I figured that at the very least, the local historical society might have an interest.  Directionless, and completely unsure if the castle was still standing, we slowly made our way down the main road and wondered what would happen next...