I am on the verge of being a fully-fledged hoarder.  As someone who sews and is constantly working on a project, I find myself drawn to remnants – and better still, yardage - of vintage and vintage-reproduction fabric.  Anytime I see a piece of material that looks a little “old timey,” I squirrel it away for some future design project.  Some might call that a collection…but it gets worse.  Having borderline, pre-hoarding tendencies, I have a very difficult (read impossible) time letting go of even the little scraps that are left behind from cutting out a pattern.  You might ask, “What are you going to use them for?”  Serious hoarders will give you some vague response about the Halloween costumes they intend to make for their cats.  They will mumble about the various fabric techniques one can implement for bundling that mountain of National Geographic back issues that is taking over the living room.  They will eagerly explain their ambition to train the cockroaches but insist that they need the fabric for the leashes.  With only a toe dipped into the abyss of “hoarderdom,” I have found a project that can turn the bits and pieces of my mania into something both functional and endlessly time consuming – yo-yos!! 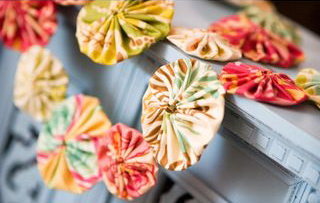 According to the Alaska State Museum website, www.museum.state.ak.us, fabric yo-yos are thought to be a creation of Filipino fabric artists who developed the technique at least 100 years ago when inspired by the primitive (and not yet trademarked) yo-yo toy.  Since then, yo-yos have become a staple of American textile design, reaching their peak of popularity during the 1920’ – 1940’s.  These were the early days of wacky tacky when women found yo-yos easy to make in mass quantities and even easier to take with them as an alternative to knitting and crochet.  Moreover, during The Depression and in wartime, thrifty women found it wasteful to discard anything that might be useful.  They, I will remind you, were not slandered by the term “hoarder,” rather they were bestowed with the honors of  “frugal” and “patriot!” 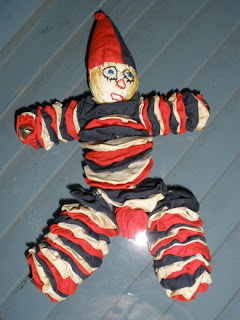 Initially, I failed to think much beyond the exercise of turning the scrap fabric into yo-yos.  After making so many, however, I realized that instead of flat scraps of fabric, I was now the proud owner of hundreds of these crazy rosettes that were begging to be turned into something bigger, something better.  Not having done much research on the subject, and pretty certain of my genius, I set out to create the world’s first yo-yo quilt!  Little did I know that yo-yo quilts are probably the most ubiquitous of all yo-yo projects.  Nevertheless, the yo-yo quilt project has begun!  Too deep into it to give up now, I recently calculated that based on the size of the finished yo-yos, I will need approximately 2595 to reach my goal – WINNING A BLUE RIBBON AT THE COUNTY FAIR! (not really)  I have been making these things for a while now and I am currently at 523.  I have decided that instead of a completely random assembly of the yo-yos, I would make 3x3 squares in a checkerboard pattern with a border of black in between - similar to a granny afghan. 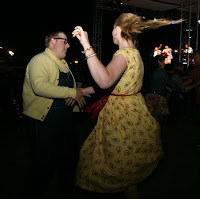 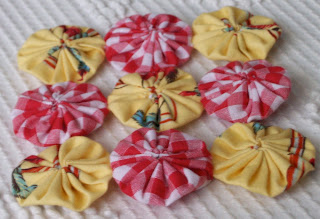 If you squint you can see Big Sandy, Jeff & Ashley. 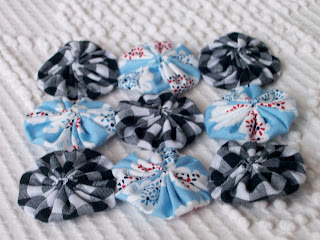 Most of the yo-yos are made of cotton prints that I've used to make dresses. 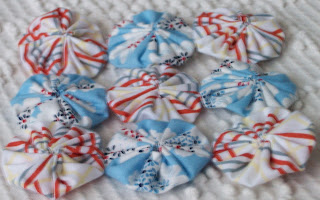 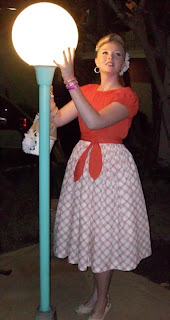 Never having been the brightest bulb, Mary tries to tap into the brilliance of electric light. 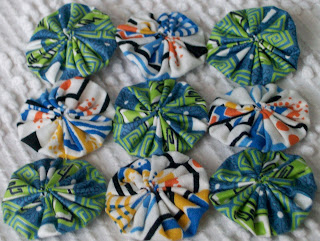 A30's style ensemble made with a crazy fabric I found in the dollar section at the local fabric store.


Am I more like your grandma than you may have previously thought?  Probably.  Have I entered into the early stages of dementia?  More than likely.  Will you come running to me when you are in desperate need of a wacky tacky blanket that provides little-to-no warmth?  You betcha!  I’ll see you in 2019 when the quilt is done. 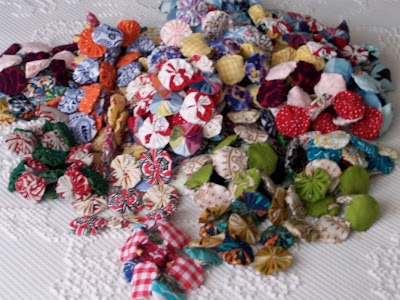