You might remember my friend Suzy, the Disney artist/cast member whose retina scan not only gives her unlimited access to the archives but once gained her entry into "the freezer" where she took the opportunity to do body shots off of Walt Disney.  Well, it is nice to have friends like that who are always on the lookout for wacky tacky-ana.  Knowing my predilection for art history and popular culture, she sent me a link to the article that told the backstory behind one of the most famous and most-famously reproduced paintings in the world - Chinese Girl by Vladimir Tretchikoff.  Dig this, the "Green Lady" was a real woman but she wasn't really green!  It has been said that more prints have been made of Chinese Girl than even the Mona Lisa, herself.

Russian-born Tretchikoff was a self-taught artist who captured the spirit of the exotic both in still life and, more fascinatingly, through portraiture.  He lived the better part of his life in South Africa but was heavily influenced by Asian culture as well.  His reputation is that of the "King of Kitsch," but during his lifetime, he was the second-richest, living artist behind only Pablo Picasso.  I have always found it interesting that in the world of "high art," accessibility and popularity immediately equate to "low-brow."   Below are several examples of Tretchikoff portraits; I find them rich in passion and technique. 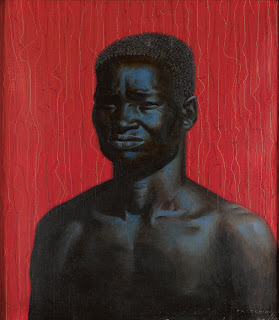 I find Tretchikoff's work to be sensual, personal and intimate.  He chose subjects that were uncommon for the time and instead of exploiting them, he showed the beauty of their spirit and culture.  My brother has a copy of Chinese Girl that I have vowed to steal one day - she shall be mine!