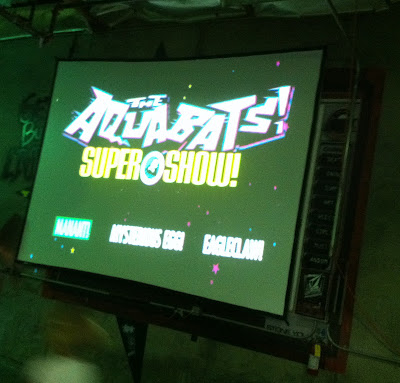 I didn't start this blog as a commercial venture.  I refuse to endorse any product or program without thorough research and proper self-reflection.  I'm no corporate shill.  I won't hock something just because someone is coming through with the old payola (only because no one has tried).  The only way to earn my endorsement is theough pure, unadulterated nepotism.   Last summer, Mary found a pretty sweet job as a wardrobe assistant on the new, hit, kids' program, "The Aquabats Super Sow."

Last Saturday, we were invited to the season one wrap party being held at Volcom corporate headquarters.  The night included food, friends, and a viewing party.

Being that it is a contemporary children's show, I went in under the false assumption that there would be some redeeming value, a "message."  Boy was I wrong; the show is just childish humor, animated sequences, sight gags, crazy monsters, and burger rain!  It is refreshing to watch a show that is just silly for silliness' sake and doesn't hammer you over the head with a lesson on environmentalism - sorry, Lorax!  We can credit the cast, the writers and the director, our friend Jason, who also lends his considerable talents to "Yo Gabba Gabba!" 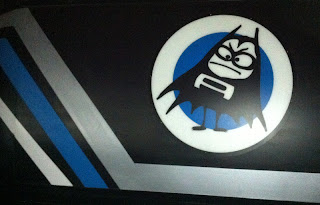 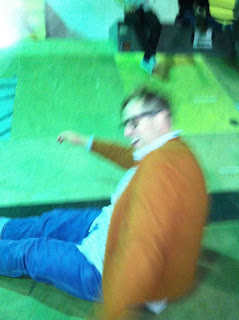 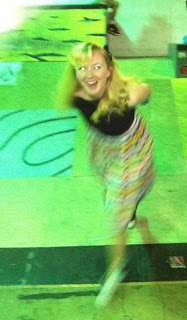 Get out of my way kids!
The best part of the night was when Mr. Tiny took down some guy
who was foolish enough to plant himself at the bottom of the ramp.
(terrible pictures but so much fun)

I have seen the first three episodes and they actually made me laugh out loud.  If you're awake at 8am on Saturday mornings and you're still inclined to eat cavity-inducing cereals while watching cartoons and wearing your blanket as a cape, then be sure to check out "The Aquabats Super Show."  Giant Man-ants, monster chickens, Sharpee mustaches, Napoleon Dynamite, the constant search for food - all these things spell wacky tacky TV!