In the heart of Downey, CA now stands a monument to true "California Cuisine," namely, Bob's Big Boy Broiler.  Bob's "Big Boy" hamburger was the creation of Glendale's own Bob Wian in 1936.  After changing hands a few times over the years, the Big Boy corporate headquarters are now located in Michigan.  Bob's Big Boy restaurants are franchised, but the owners of the Downey location have done it right by acknowledging the history of the chain and the history of it's location - including all of the brilliant neon! 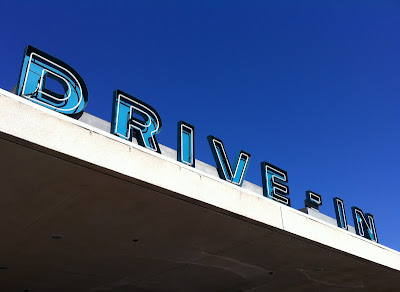 The BBB Broiler originally opened in 1958 as Harvey's Broiler.  In the 60's, the restaurant was sold and became the original Johnie's Broiler (subsequent Johnie Jr.'s opened around Southern California).

For decades, the iconic broiler signage heralded both savory and sweet delights for drivers on Firestone Boulevard.  In sadder days, the building languished as a car dealership and eventually, was partially demolished by an unscrupulous landowner before preservationists and concerned citizens intervened to save the landmark.  Fortunately, the BBB corporation stepped up and did a faithful recreation/expansion of the original building.  We're happy because the finishes are attractive, comfortable, and steer away from the ubiquitous red/white or magenta/aqua color combinations that plagued "retro" diners for so many years.

In terms of the food,  Mary thought it was better than the Burbank location.  The soda fountain treats must've been delicious because EVERY table in the whole joint ordered a brownie, fudge sundae (with the one exception ordering a banana split)!

Our Downey adventure didn't begin or end with Bob's, we decided to drive throught the surrounding neighborhoods and check out more of what Downey had to offer.  After our New Year's experience, with the people and the parade float of Downey, it should not have come as any surprise that I liked what I saw. 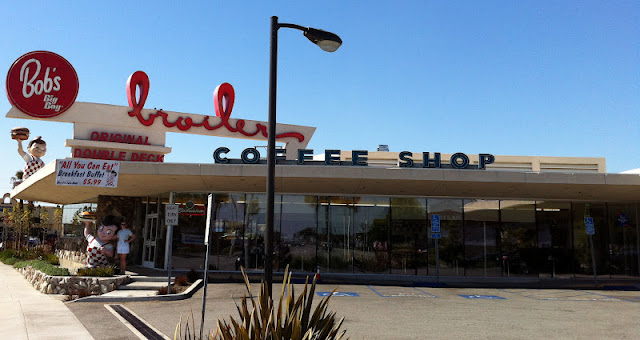