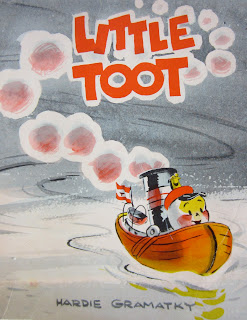 As much as I love trawling thrift stores looking for treasures, the fact is that I am actually pitifully, pathetically, and painfully bereft of the thrifting mojo.  But sometimes the thrifting gods (probably just to mess with my brain by instilling a false sense of confidence) smile upon me.  For some people, their benevolence can be realized in a coveted Catalina swimsuit in just the right size, or a pair of lamps with matching, fiberglass shades, or a Heywood-Wakefield side table for under a million dollars.  For me it is found in the uncovering of a childhood favorite.  Imagine my surprise when at the very same thrift store, where a couple of months ago I found a well-loved copy The Little House,  I found a copy of Little Toot. 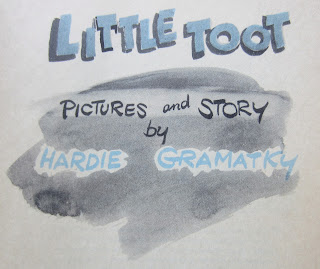 I will be honest, just like The Little House, I never owned the book Little Toot, which actually made finding the book all the more exciting.  I was introduced to the charming story as one of the animated sequences from Disney's cartoon revue, Melody Time, as sung by The Andrews Sisters. 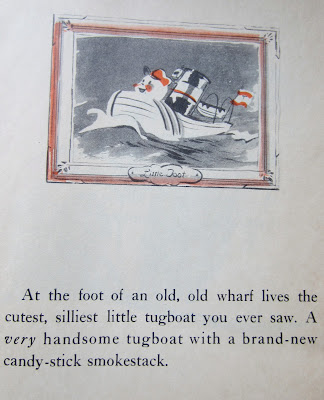 Little Toot is the story of a boat who, in his neurotic desire to become the best and most efficient tugboat,  nearly kills two cruise ships full of unsuspecting passengers, myriad dock workers and pedestrians, himself, his father, and potentially, a bevy of marine life as well.  It is the unflinching examination of father-son relationships, betrayal, forgiveness, and redemption.  It explores themes of self-loathing, bullying, depression, alienation, and most importantly, water safety - pretty heavy stuff for a children's book. 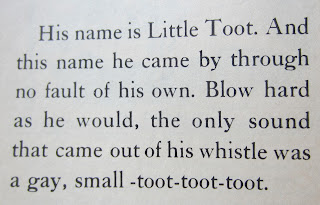 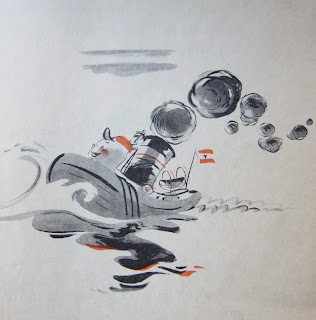 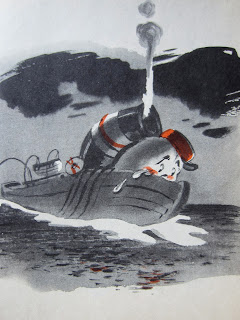 Happy one minute, sad the next, they were going to rework
the story with trains instead of boats and call it "The Bi-Polar Express."
(Forgive me, my intention is not to make light of depression
or mental illness but that one made me laugh)

Okay, so maybe I was reading a little too much into the story.  Truth be told, Little Toot is an eager tugboat that makes a few mistakes but learns some valuable lessons along the way.  Published in 1939, Little Toot is a solid children's book with amazing, watercolor illustrations.  Here are just a few of the plates from the book.  I think it is cool how consistency was not an issue for Gramatky; as long as the key elements were there, Little Toot was sometimes a cheery, pudgy-faced, button-nosed, line drawing and sometimes he was heavy-browed, awash in color, and had dark, shoe-button eyes. 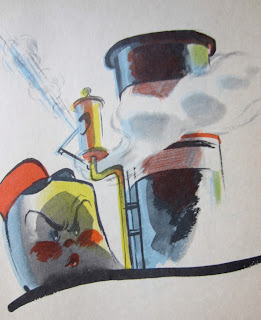 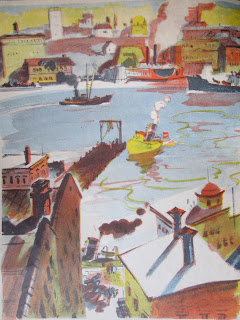 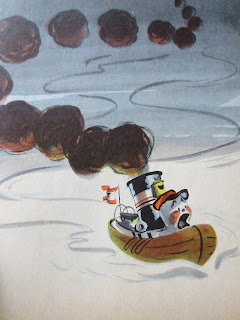 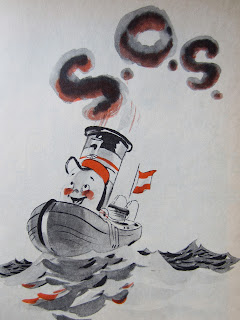 The many faces of Little Toot

I love how strongly influenced the animators were by Gramatky's beautifully rendered watercolors.  You'll see that now as you enjoy Little Toot, as interpreted by the fine folks at Disney Studios.  Come on, it's a no-brainer.  The Andrews Sisters, plus Disney, plus a zippy little tug boat - what's not to love?


I know there was a greater power at work when I found Little Toot.  Just the night before, Mary asked me to pick a song at random and sing it and what song do you think I chose?  Hmmmm?  "Won't you ever grow up Little Toot?"  With the forces of the cosmos on my side, I am currently working on a song entitled, "New Car, Free House, and Five Million Dollars."