In verse 13, I am pretty sure The Bible is referring exclusively to hamburgers.  I know I have bored you witless with my references to a strange diet that I have been keeping for the last ten months.  At every opportunity I have bemoaned the fact (mostly in the Chow Time posts) that wherever we were, I was there just for the history and ambience and therefore, wasn't partaking of the culinary excellence with which I had surrounded myself.  That all came to a screeching halt last Saturday.

This past weekend we went on an epic, one-day, road adventure with our pals Bob & Amber.  Into our day we packed so much time for sewing, laughing, dancing, embracing, gathering of stones, and plucking up that which was planted that I have to separate our adventure into multiple posts - beginning with a hamburger that I have been waiting years (plus ten months) to taste.  It was my season to chow down!!!


Emma Jean's Holland Burger Cafe seems pretty unassuming and really wouldn't garner much more than a fleeting, drive-by glance on old Route 66 - until, of course, one realizes that its modest mid-century architecture, bathed in a saturated, sea foam green is home to one of roadside California's very best hamburgers.  Opened as Holland Burger Cafe in 1947 by the Holland family, Emma Jean's became Emma Jean's in 1979 when Emma Jean (a long-time waitress) took over ownership of the cafe.  Her son, Brian, and his wife, Shawna are the current proprietors and carry on the long tradition of delicious food and happy customers. 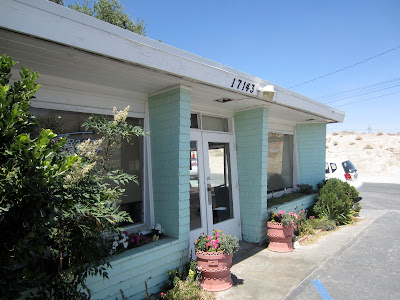 Yes, Emma Jean's Holland Burger Cafe was featured on Food Network's "Diners, Drive-Ins & Dives."  Yes, I did feel like a bit of a sell-out going to a place that had become "cool" after its basic cable debut.
No, that wasn't the first time I had heard of it, having a few friends who live in the high desert.  No, I was not going to miss out on the joy of crossing an item off my bucket list based on some strange, self-imposed "principle" of decrying anything that is too "cool."  As a side note, is it strange that 87-93% of the items on my bucket list are food related?


This isn't an especially picture-heavy post because, again, Emma Jean's Holland Burger Cafe isn't especially picturesque.  The interior is shoe box-ish with many finishings that have been replaced over the course of its 65-year lifespan with economy in mind rather than historic preservation.  One doesn't go to EJHBC for the decor (which thankfully is not overrun with Route 66 memorabilia and life-size cut outs of James Dean and Elvis).  One goes for the great food and the hospitality of the management.  On a busy Saturday, we counted ourselves lucky just to find a seat!

It couldn't have been more clear to anyone present that I was the most verdant of greenhorns.  Shawna, the owner and our waitress, took every opportunity to initiate me.  From the novelty, trick-ketchup that she squeezed on me, to my utter confusion over whether I was supposed to hand her my trash or my water glass, to her friendly/gruff demeanor, it was clear that she has no problem turning newbies into regulars!


The burgers were delicious; Mary still can't stop talking about hers.  The portions were so generous that we didn't have any room at all for the tempting cobblers about which there is much buzz on the blogs and review websites.   Gratefully, EJHBC is far enough away where it can only be a special treat on an adventure day. 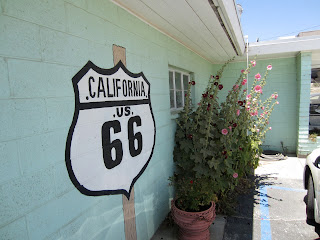 Don't worry about my diet, that was my first and last hamburger for a very long time.  I have been suffering the consequences for the last few days and I am emotionally prepared to live on the sweet memory of that burger and the good times that we had at Emma Jean's for a long time to come.  If you're in the Victorville area (or at least passing through), I encourage you to visit Emma Jean's Holland Burger Cafe and say "Hi," to Shawna.  Show the gang a good time and pay for everyone; just because it's a Holland burger doesn't mean you have to go Dutch Treat!!! 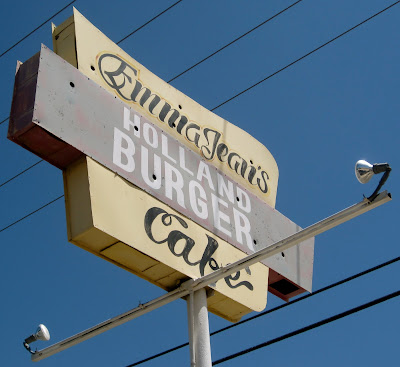