My very favorite days are adventure days!  Sometimes they are born of boredom, when we hop in the car with absolutely no direction and go where the wind takes us.  Other times they are planned in great detail, with a trunk full of snacks, a cooler full of drinks, good friends, and an itinerary eight pages long.

As I mentioned in my last post, we spent a wonderful Saturday with our friends Amber & Bobby, on an exploration of the high desert of Southern California.  Fortunately, the weather was ideal, breezy and hot - but it was a dry heat!!!  Hopefully you're in a comfortable chair because this is a very picture-heavy post.


MORMON ROCKS AT THE CAJON PASS 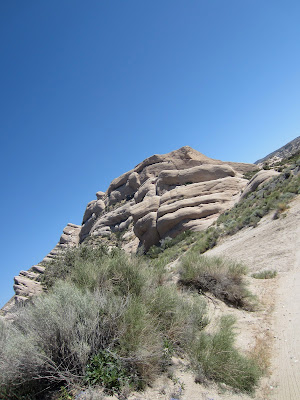 Our first stop of the trip was Mormon Rocks at The Cajon Pass, so named because of the significant rock formations, created by shifts in the San Andreas Fault, and noted by the Mormon Pioneers as they made their way from Salt Lake City to Southern California. 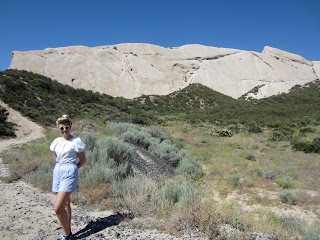 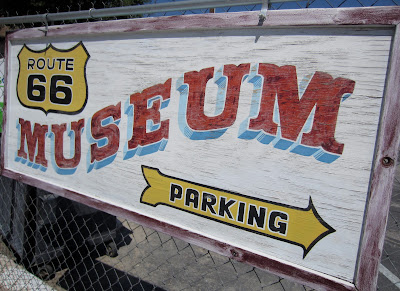 Our next stop was the Route 66 Museum.  There was a car club there that I was foolish enough to not get pictures of even after one of the ladies snapped a photo of Amber and kept looking for "that blonde hussy," Mary, so she could get a picture of her too!  I also didn't get a single picture of their cars.  Thanks to Paul & Larry, volunteers at the Museum, I found a picture of us on their Facebook page! 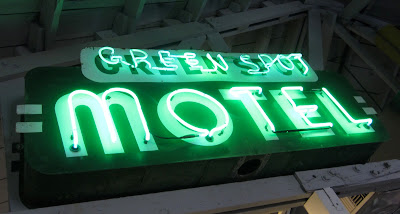 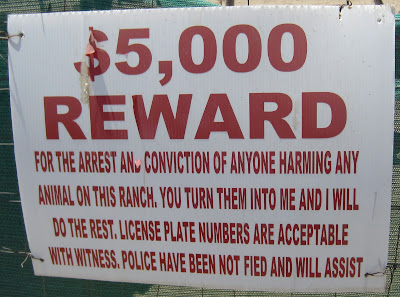 Ostriches are weird and scary.  According to legend, that I may or may not have made up in my own imagination, they can disembowel you with one angry kick.  They are definitely prehistoric in origin and they don't smell particularly good.  Therefore, it was strange that I was so happy to be around them and take their pictures.  Could you imagine seeing one in the wild?  The weirdest bird that we have in my neighborhood is the eccentric lady down the street who built a wall around her front yard so she can sunbathe in the nude...and sometimes we see those wild parrots that make so much noise. 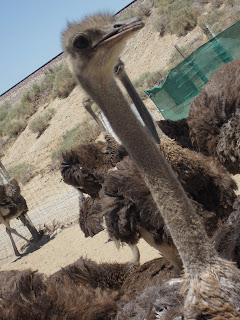 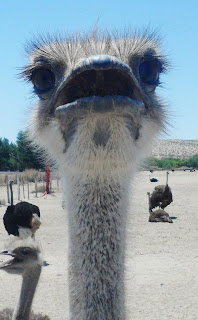 Their beaks are constantly opening and closing (recreating the sound of that coconut shell horse gallop) and their mouths are full of some kind of phlegm that is probably due to seasonal allergies and the arid desert climate.  I was pretty sure they were saving it up to spit on me.  Amber, in another surprising turn of events, was not afraid at all! 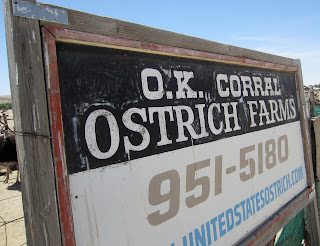 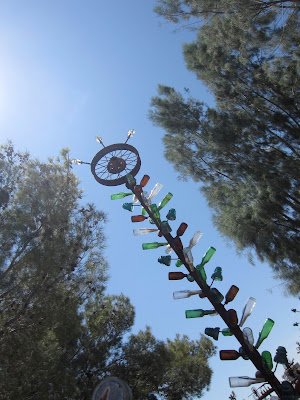 The glory that is Elmer's Bottle Tree Ranch is beyond description.  This one spot alone, would have made our trek worthwhile.  The only disappointing part was the absence of Elmer.  We were assured by our pals at the Route 66 Museum that if Elmer was there, he would come out and chat about his ever-evolving masterpiece - no such luck!  But the presence and inspiration of Elmer could be seen and felt everywhere! 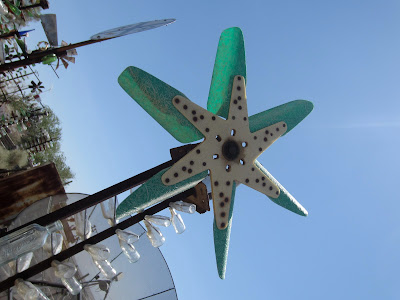 Elmer's Bottle Tree Ranch is an homage to the long-gone, Mahan's Half Acre Hulaville.  The signs for the defunct bottle tree forest can be seen above (they are on display at the Route 66 Museum).

Our ultimate destination was Nelson Studios.  Amber told us that her dad found this abandoned studio lot on one of his adventure days and had since taken them back to explore the grounds.  Relics of long-forgotten films litter the premises and offer a look into a place that is very difficult to research. 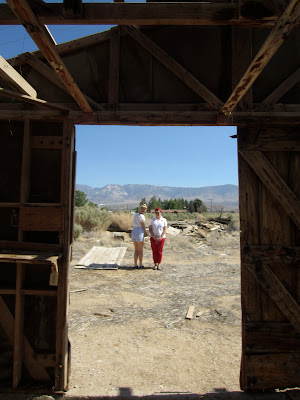 The property is covered in stone, cement, plaster, and fiberglass figures that were presumably used as set pieces or ???  Almost every item is in pieces, but there was so much to examine and discover that we decided early on to save some room in the trunk for mementos from our visit.

Our favorite piece of all was the gargoyle, but it was far too heavy, not to mention cemented into the ground, to realistically excavate and bring home.  We had to settle for taking our pictures with it. 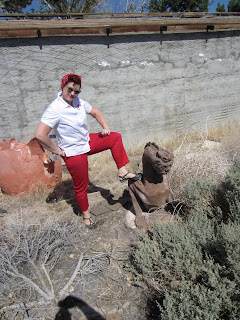 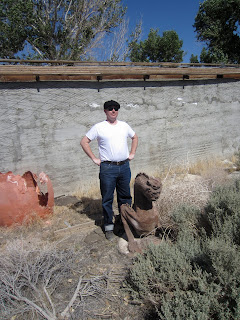 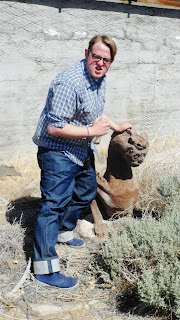 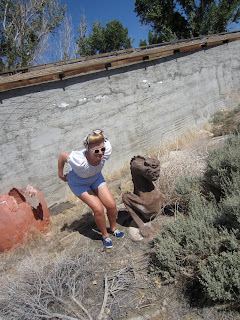 I make apologies for neither my poses nor  my hair on adventure day!!!

Sadly, I couldn't gather much information on Robert Nelson or his studios in one of my famously perfunctory Google searches.  The only thing I could find was a picture of the studio's water tower on someone's tumblr.  One of the comments on the photo indicated that the studio was in operation into the mid- 90's and that old man Nelson was eccentric, kind, and rich in not much more than interesting stories.


Was that enough adventure for you or what?  I hope it wasn't too much because I even left out a few minor stops AND we still have a couple more posts from our epic adventure day.  Thanks Bob and Amber for a wonderful day!  I hope that she's already hard at work on the itinerary for our next adventure!!!

* On an entirely unrelated note, we are closing in on 100 followers - not a huge number for some of you big-time bloggers out there, but extremely surprising and gratifying for us here at wacky tacky!  When we reach 100 followers, we are going to sponsor our very first GIVEAWAY (details to follow)!  So, please encourage your friends to follow us here and on facebook.  Thanks for following and participating!