I've said it before but it bears repeating, until I visited West Virginia, I had no concept of small town living.  Driving down the two-lane Main Street into Mt. Hope, WV, it took me a moment of adjustment to realize that the immediate transition from charming homes to a few small shops and restaurants was all I was going to see before we had completely traversed it in its entirety and left the city (and I use that descriptive in its most casual denotation) limits.  In Mt. Hope (and many of its West Virginian ilk), "Main Street" isn't a colloquial reference to an old-timey downtown area; Main Street is all there is.  I'd heard of one-horse towns and one-light towns, but I had yet to experience a one-road town. 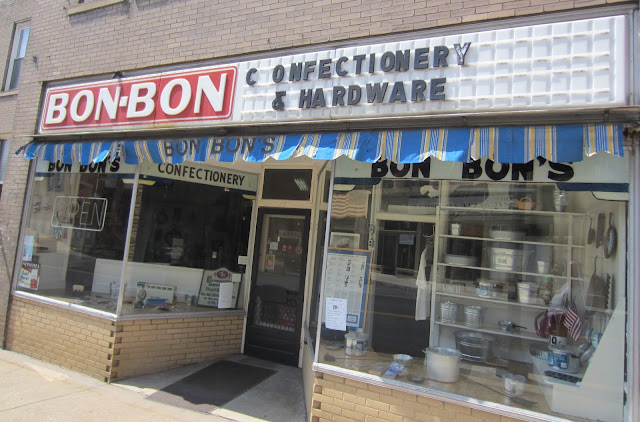 This particular one-road town had something special that required a return trip to down its Main Street, namely Bon-Bon's Confectionery & Hardware (est. 1920).


Our discovery of Bon-Bon's was purely accidental as we walked off lunch from a neighboring Italian restaurant.  Although it was early in the afternoon, the screen door (yes, the screen door) to Bon-Bon's was latched.  Asking a passerby if the store had permanently shuttered its doors (not an uncommon sight in this part of the country) and he replied that the store was open everyday but the hours depended entirely on the proprietress who usually closed up shop around noon.  After a few days and several cheery phone conversations, we went back to Mt. Hope to visit our favorite, small-town convenience store and its lovely owner.


A vintage soda shop and movie theater?!?!?!  In all sincerity, I couldn't think of a more perfect life...until I realized that West Virginia experiences a bizarre weather phenomenon called "Winter;"  That doesn't really work for Mr. Tiny.

Like our encounter with Bon-Bon's, it seems that some things are simply meant to be.  Shortly before my trip, my mom showed me the back page of Country Living Magazine.  In a very brief, but impassioned article, Country Living shone its light on the pride of Harrisville, West Virginia, Berdine's Five & Dime.  The timing of the article and the charm of the accompanying photographs was perfect; the spirit of the owners and staff set the tone for the whole of my trip. 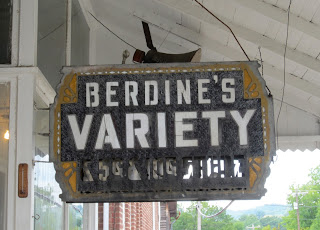 At 105 years old, Berdine's is widely recognized as America's oldest, and continuously-operated, five-and-dime stores in America.  Eat your heart out Woolworth's!!!

It is a miracle that Berdine's still exists.  Firstly, its location is almost the exact definition of "the middle of nowhere."  Thinking that West virginia was a small state and everything must be a stone's throw from everywhere else, I was bound and determined to follow the editor of Country Living's advice; so I set out on the road to Berdine's.  Three and one half hours later I was lucky to find parking in one of Harrisville's five parking spaces.  Secondly, maintaining a tradition of genuine hospitality and quality inventory with a name that scoffs in the face of 21st Century inflation is a difficult endeavor.  Thirdly, as a true variety/five-and-dime store, Berdine's must stock a dizzying array of merchandise in hopes that shoppers are still interested in rattle snake eggs, beaded hairnets, primitive clayware jugs, and fly paper.

Berdine's is much more than a toy store, however.  In just 1,500 square feet, it is a dime store, a novelty shop, a variety store, a gift shop, a general store, and housewares supplier.

Despite its name, Berdine's Five & Dime is not selling everything for nickels and dimes but they do their level best to keep prices low and joy levels high.  If I lived in close proximity, it would unquestionably be my go-to destination for gifts, sundries, and everything in bewteen.  Honestly, where else can one find:

I have fond memories of the five-and-dime in my home town that held out until about 1999.  Do you have any shops like these where you live?  Do you own a shop like this that you would like to feature on wacky tacky?  Please let us know; we'd love to hear from you! 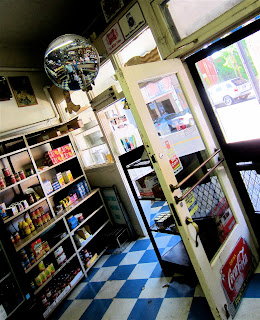 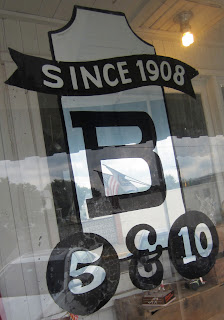 Editor's Note:  If you're ever in West Virginia and want to visit both of these locations, please keep in mind that they are about 170 miles apart (a roughly three-hour drive).
Posted by Mr. Tiny at 4:06 PM