"Holler" at Your Boy: The Country Roads of West Virginia

Is it weird to bid farewell to my West Virginia adventures by saying, "Hello?"  This final installment of the series is meant to recognize the bounteous beauty found along all of West Virginia's country roads.

My first thoughts upon seeing West Virginia from the vantage of the airplane's window seat strayed to Tom Sawyer and Huckleberry Finn.  Yes, I know West Virginia and Mark Twain's Missouri are hundreds of miles apart (geographically and culturally), but film contrivances and my imagination are all I have to go on and that's where I went.  Just look at that river! 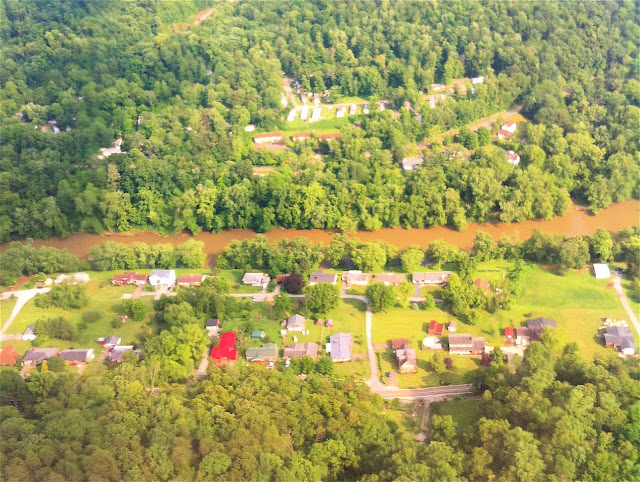 Before my travels, it never occurred to me that Southern California was such an arid clime.  I live in a neighborhood full of lawns and trees and growing things but, to pose it West Virginia parlance, we ain't got nothin' on Appalachia.  The depth and variety of green made me feel like I could see color for the very first time.  The air hangs heavy with a humidity for which I have never held a great affinity but somehow felt oddly comforting.  Honestly, the humidity explains both the verdant landscape and the slower pace at which West Virginians tend to operate because every motion is met with resistance; walking down the street is like wading through a pool.


Everywhere we went we saw rivers, lakes, streams, hills, waterfalls, forests, and wildlife.  It all felt so strange and inviting that we were tempted to dive headlong into serious exploration.  Seeing our enthusiasm, locals felt obligated to give us one piece of advice, "Stay out of them hollers!"


Hollows (pronounced "hollers"): n. the sloping valley areas between hills that can be dangerous
as they are often home to an unsavory populous pursuing less-than-lawful activities.

Deliverance is probably more cautionary tale than anyone could possibly need, but the best delivery of this counsel was spoken thusly, "Y'all don't wanna end up like in one o' them wrong turn movies."

Not wanting to end up like the victims of a "Wrong turn" movie, we stuck mostly to paved roads and the numerous national and state parks that abound throughout West Virginia's countryside.  Speaking of country, this city slicker had, of course, heard the term "Country mile" before, but it took flying a few thousand miles to understand exactly what that term meant.

These dolls have very little to do with nature and country roads but I
saw them in almost every second-hand/thrift/antique store that I entered.
Their primitive, soft-bodied forms and plastic faces (I already have a few
in the stash) make them the perfect wacky tacky craft project; stay tuned!

Often times I silently refuse to step out of my comfort zone.  Going to West Virginia (a huge leap outside of California comfort) emboldened me.  Embracing small town mentality didn't always feel comfortable but it felt necessary and exciting.

The best part about traversing the country roads of West Virginia was the opportunity to fulfill a lifelong fantasy.  Normally, I am extremely grateful that Southern California is lacking so many of the insect species that make their homes in more humid climes.  On this occasion, I was beyond excited to encounter BUGS!

I must regularly rebuke myself for speaking too often in sweeping generalities and broad pronouncements.  That being said, I can almost guarantee with near 100% surety that I will NEVER again employ a John Denver song to underscore a wacky tacky post.  However, there simply isn't another song that so clearly demonstrates the feeling of those winding Appalachian roads.

I will freely admit that I sang the refrain to this song at least three times a day while I was within state lines.


A HUGE thank you to my sister, brother-in-law, and the cutest nephew in the entire world for hosting me so graciously and making it an unforgettable trip.  I miss you guys!!

I can't tell you how much I love, love, love traveling and finding the beauty and the wacky tacky that the world has to offer.  I'm already itching to go on the next adventure and so I'll pose the question to you.  Where should I go next?  Do you have any recommendations for a "wild and wonderful" adventure to satiate my wacky tacky wanderlust?

Until next time, West Virginia!