This, my friends, is an unprecedented Chow Time post.  I have made a promise to myself that I won't post about places that I haven't been.  I won't post about crafts I haven't made (unless I'm featuring a talented crafter that I have met/interviewed).  I won't shill merchandise that I have never tried or for which I have no affinity.  Basically, I won't manufacture a blog out of thin air (let's face it, there is nothing thin about me, even the very air I breathe) based on something about which I have no personal knowledge and/or experience...until now.

To be absolutely fair, I have been to Howard's Famous Bacon & Avocado Burgers in Los Angeles, CA (see above photo); I just haven't eaten there.  The irrefutable flaw with that point is that I have no reasonable explanation for my self-inflicted fast.  Self control has never been one of my virtues and usually when confronted with a hamburger (a bacon & avocado burger no less), I go from willing participant to grease-stained glutton before I can even consider the option of abstinence.  At the time, I believe I heard myself say, "I'm not hungry;" knowing that those words have never before escaped my lips, I think I might have been temporarily possessed by some evil force (it says a lot about my character that several weeks after the fact, I'm still grieving the missed opportunity).  On that day, for reasons unknown, I watched as my compatriots enjoyed the spoils of Howard's famed kitchen while I sated myself with photos of the interior, the staff, the patrons, and of course the bacon & avocado.

With the style and locale of a post-surf hangout, Howard's (est. 1971) really looks like a set from Village of the Giants, Fireball 500, or any number of low-budget teen movies from a particular era.  Happy with my surroundings, I learned that, aside from food, there is much to appreciate about Howard's Famous Bacon & Avocado Burgers.

Howard's claim to fame is that they were the first to marry a hamburger with what I believe are the two ingredients that can be added to almost any food to improve the balance of flavor, texture, and the overall eating experience - bacon and avocado (at the very least, they were the first to make a giant billboard with marquee lights announcing the beautiful union).  We have friends who, after moving to California from the opposite coast, mock every menu that has something "California style,"(includes bacon and avocado).  Simultaneously filled with pride for California's delicious culinary contributions and pity for the tragedy of unrefined palates, I leave our friends unnamed in hope that, in their anonymity, they will have time to reflect on the shame of their speciousness (before they are deported from California's borders on the grounds of gastronomic treason).

I genuinely appreciate the signage and the seating and the swell atmosphere at Howard's, but next time, there will be burger! 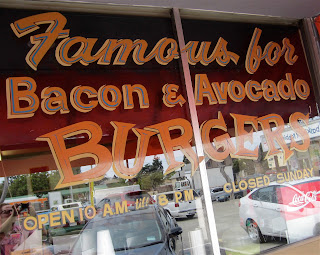