The "Early American" Revolution: A War for Mid-Century Independence

When imagining the living rooms of the quintessential American TV families of the mid-20th Century - The Cleavers, The Mitchells, The Stones, The Williams, The Baxters, et al - one would be hard pressed to find in that dreamscape of design a starburst, an amorphous coffee table, a George Nelson timepiece, a Barcelona chair, or anything even remotely resembling an Eames' design.

Maybe it was a conscious effort on the part of ultra-conservative television executives to pretend that American domesticity skewed decidedly toward the traditional OR maybe it was art imitating the reality of life.  Perhaps, if I may dare to conjecture, the design movement generally referred to as "Early American" was far more prevalent than the atomic shapes, patterns, and colors that abound in contemporary iterations of mid-century design schemes.  Speaking only from the experience of a) having two sets of grandparents with houses full of reproduction windsor and ladder-back chairs, turned-wood four poster beds, colonial secretary desks, and classically-styled spinets and b) seeing a glut of similar merchandise in resale establishments, garage/estate sales, and thrift stores far exceeding the availability of their "modern" counterparts, it seems as if "Early American" might have a had a larger audience than our romantic notions of popular culture history might have led us to believe. 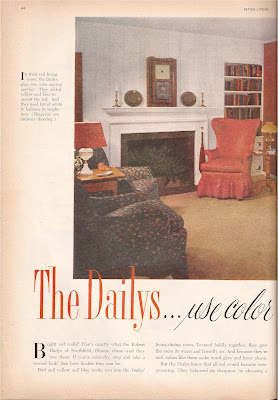 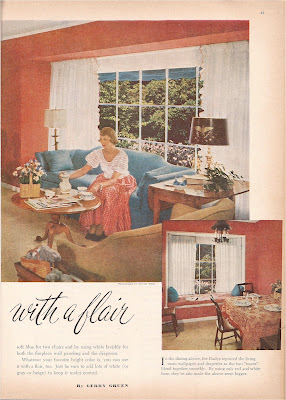 Encountering this article in the November 1951 issue of Better Living Magazine, I was reminded
of how strong a movement "Early American" design was.  So strong in fact, that the article just
takes the major elements of the room for granted.  Not wasting a word on the paneled wall, the
brick hearth with traditional molding and mantlepiece, the camelback sofa, the tilt-top tea table,
the brass candlestick lamp with gilded eagle, the wingback chair, the hobnail glass, the chintz
upholstery, or the classical symmetry of it all, the author focuses exclusively on the color
scheme - red, white, and blue.

I'll admit it, sometimes I get sucked in by the glamour of blonde wood and mobiles and starbursts and boomerangs, but I'm kind of hokey pokey at heart and I love the comfort and nostalgia of 1950's-does-1780's.  So much so, that I try to encourage other people to participate in these anachronistic design choices with me.


But the battle is mostly uphill.  It took a lot of convincing to get my sister-in-law on board with the incredible, 1950's, Ethan Allen, sleeper sofa that my brothers and I found at a thrift store for $12.50!!!  Its beautiful red-and-blue plaid upholstery, wood trim, high back, and turned-wood spindles, were so contradictory to the streamlined, low-profile silhouettes of its contemporaries that it just seemed downright un-American  In actual fact, it screamed "Early American" so loudly, that we thought it was going to start another revolutionary war.  She quickly changed her tune when I found an Early American side table with a built in lamp fitted out with hurricane glass and one of those glorious, fluted/ruffled, fabric lamp shades.

My very favorite is when the two worlds, Early American and Mid-Century Modern, collide; in my travels I often see that ubiquitous icon of mid-century decor, the two-tired end table, executed with turned-wood legs and spindles and a scrolled apron.  The mash-up of competing styles is pure magic.


Having just defeated the enemy, America was on a post-WWII high, fueled by extreme optimism and unbridled patriotism.  That heady combination just might be the reason for the broad embrace of the stylistic elements of colonial America.  U-S-A! U-S-A! U-S-A! (Are you chanting with me?  Hahahahaha!!!)

Sometimes rustic, sometimes refined, the Early American style wasn't just limited solely to sitting rooms; kitchens (don't you love those black strap hinges and Early American Pyrex?), bedrooms, and clothing trends were subject to the influence as well.  As a matter of fact, even eateries capitalized on the success of the colonial craze (see our coverage of  Colonial Kitchen in San Marino, CA).

So which do you prefer?


Given that much of Early American design is rooted in tradition, it seems counterintuitive to highlight it in a wacky tacky post.  However, I think that amongst the current old-timey set it is so positively subversive to be such a fan of "Grandma Style" that it fits well within the realm of wacky tacky, don't you?  Sacrifice mirrored shadow boxes and boomerang coffee tables for wingbacks and decorative butter churns???  Oh, the horror!

Well, does the Early American style remind you of mom or grandma?  Do you think that there is a reason this style goes unappreciated?  Is it best forgotten?  I wonder if this style (along with other American exports of the time) became fashionable in other countries.  Non-US readers, please feel free to weigh in on the subject!